History of the Cracker Jack Company

It will be a bit harder for those born after the 1970s to get the full impact of the thrill of finding a toy or other prize in a box of Cracker Jack or breakfast cereal or a gumball machine, because today so many of the fast food chains provide a toy with every child's meal purchased, but for those of us born before the 1970s, it was a BIG deal. In my family, money for toys was scarce. My favorite cereal box toy was a submarine that when its cavity was filled with baking soda, would dive and resurface in my Mom's laundry tub. Lots of the prizes were rings geared to popular hero figures, cars, or plastic horses, but my favorite prizes were the charms. As an adult, I love collecting charms of all periods and materials, but Cracker Jack charms remain some of my most treasured finds. The Cracker Jack Company not only had a tasty product of popcorn covered with molasses and peanuts, but they gave away a prize in every box, many of which have survived to delight "kids" of all ages.

Cracker Jack was produced by a candy and snack vendor, Frederick William Rueckheim, who had immigrated to Chicago Illinois from Germany in 1869. Together with Rueckheim's brother, the Rueckheim Bros. company produced the popcorn, peanut and molasses snack in large vats. popcorn "balls" were around, but how the Rueckheim Bros. kept the mollasses covered peanuts and popcorn kernels separated became their trade "secret." The name "Cracker Jack" would not be used until 1900 when it began to be marketed in a wax sealed box. The nephew of the Rueckheim's was used as the model for the cute "Sailor Jack" Cracker Jack's logo. Unfortunately, the nephew died at age 8 shortly after the logo was adopted. As the product became extremely popular, the company was renamed The Cracker Jack Company in 1922. While the company produced other candies and marshmallows under the name Angelus, Cracker Jack snack was their main product. The company continued to grow and sometime in the mid-1920s, Cracker Jack bought out the Checkers Company which offered a similar popcorn product. At first, the Cracker Jack Company required that the box wrappers be sent back to the company to obtain a prize, but by 1914, prizes were included in each box.

Prizes and Toys and Charms

Charms were favorite prizes made of metal, and would continue to be metal until the colloid charms (mostly from Japan) appeared in the 1930s. Colloid was a white forerunner of modern plastic, and these wonderful celluloid charms are some of the most detailed and interesting charms ever made. Popular celluloid charm themes include animals such as horses, mules, birds, circus animals, dogs (especially scotty dogs), cats, fish, seals and farm animals. Comic strip characters such as Moon Mullins, Popeye, Betty Boop and Disney characters, and soldiers and sailors were popular figures. Expect to pay from $2.00-20.00 for Cracker Jack celluloid charms depending upon their condition and rarity. Charms with a sports theme included boxers, footballs, ice skates and roller skates, bats, gloves and baseballs. When colluloid was replaced by hard plastic, charms still had many of the same themes. 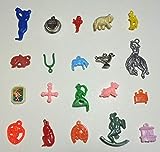 To learn more about Cracker Jack collectibles, I suggest reading two books by Larry White on Cracker Jack Advertising and Cracker Jack Toys. I also joined the Cracker Jack Collectors Association which offers a newsletter to members and maintains a website devoted to learning more about collecting.

Sadly while the Cracker Jack (now a Frito-Lay) product is still wonderful, the current prizes have been paper and not great, but just this week I heard through the Cracker Jack Collector's Club that the Frito-Lay Company is creating and distributing more exciting prizes again. In May of 2013, the Cracker Jack Company issued a Nostalgic Sticker Series of 12 of their favorite stickers that have a bit of trivia added and a code that will unlock a Cracker Jack game app on smart phones. The game app will unlock higher levels each time. One game has a baseball theme and the other is maneuvering a ball through a series of obstacles. No doubt that this will appeal to kids today. The new stickers can be found in Cracker Jack Kettle Corn, Cracker Jack Butter Toffee and Cracker Jack with More Nuts. Also, a Cracker Jack Facebook page is in the works.

As of November 2012, Cracker Jack/ Frito Lay developed nine new flavors of Cracker Jack-D, which Frito Lay is targeting adult tastes. Two of the Cracker Jack D flavors contain caffeine and have a coffee cup logo on the package of Vanilla Mocha and Cocoa Java. Other new flavors include Buffalo Ranch, Spicy Pizzeria, Berry Yogurt, Cheddar BBQ, PB and Chocolate, Zesty Queso and Salted Caramel. Now in 2016, Haston Lewis the senior director of marketing for Frito-Lay announced that Cracker Jack prizes would be paper with a digital code that can be downloaded on smart phones to allow the play of baseball moments. While times change, the downloads probably won't be around for collectors 100 years from now.

Charmed by Charms and Charm Bracelets