Different Types of Sports' Balls and Their Characteristics 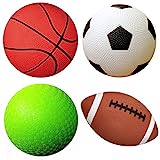 Balls are generally the first toy for infants, balls are amazing for them because of their perfect shape and importantly there are no edges or corners to harm their soft skin.

Most important thing to note down is you can't define ball as a spherical object, because there are balls which are ovoid, so the most appropriate definition of the ball would be 'a bilateral symmetrical object without sharp edges mostly spherical and sometimes ovoid'.

Balls have various uses in many fields of life, most of rotating objects use ball bearings to decrease friction. huge balls are also used in gymnast to perform exercises on it. clowns and magicians use them to entertain us. and scientist use them in various experiments mostly in physics, Newton's cradle is a good example.

Here I have tried to collect some information on balls used in some common indoor and outdoor games & sports.

soccer-ball (football) was originally made from inflated pig bladder and covered by leather. Then it was replaced by balls made by vulcanized rubber which were good in bouncing and kicking. More precisely most inner bladder is made from latex of Butyl it is lined above with polyester or cotton layer and at last covered by sewed patches of synthetic leather (polyurethane).

Americans know football as soccer-ball because American-football is another game played with hands not foot.

This ball has commonly orange surface with black ribs, the inner bladder is made of rubber inflated with air and it is wrapped with several layers of of nylon and polyester and outer layer is made of leather or good quality rubber.

The ball is generally more hard and heavy than all other balls of team sport (624 gm approx.).

Although there are different standards for every associations and federations, the standard size of a basketball in the NBA is 29.5 to 29.875 inches (75 to 75.88 cm) in circumference. The size, pressure, surface, bounce, friction and much more attributes are concerned in manufacturing. It has to pass 20,000 bounce, 100 needle piercing and 7 day temperature test before getting recognized for a match.

In contrast to basketball outer cover of volleyball is made of broad stripes sewed together and adorned with distinguishable colors , pressure in volleyball is much less and weight is also significantly less than basketball (260 gm). texture is smoother and soft. The ball used on beach is slightly different from indoor used balls in size and color. circumference is around 25-26 inch.

Rugby ball is not spherical its rather prolate spheroid or oval shape, made from four leather panels and sometimes from synthetic material of same or different colors, it is decorated with colorful designs and logos .weight: 410 to 460 gm, size: 27 cm long and circumference in the middle: 60 cm

The ball is prolate spheroid in shape, 11" long and 22" circumference in center, weighs about 395 to 425 gm. Earlier inner bladder were made from pig bladder but replaced later by high quality rubber or plastic bladder and the outer cover is almost leather.

It is similar to rugby ball in size and shape but with some differences, two ends of the ball are not so smooth and curve, they are little bit pointed. Other popular difference is it has lacing on the partitions of leather strips from which it is made.The lacing is used for grip while throwing the ball with hands.

This may be the most interested and researched ball up till now. Dimples on its surface are characteristic of the ball, they are not merely a design, they are specially done to decrease the drag of the ball in the air and to increase the flying distance of the ball when hit by the player. There around 252 to 482 dimples on a ball.

First balls were made from wood but then they were replaced by exciting new featured balls called featherie ball they were stuffed with chicken or goose feathers in a leather pouch. Now a days the inner solid core is made by colorful interior by soft and light synthetic materials and covered by special resin called 'Surlyn' which is tough and durable, other coverings are also made by material known as 'Balata' it is softer than Surlyn but has good playability. Diameter 42.672 mm(1.68 inch), Circumference 134.112 mm (5.28 inch) and weigh about 45 gm.

Cricket is most common outdoor game in India, but the traditional cricket ball which is made of cork and leather is not so commonly used on streets because there is always risk of injury while playing with this type of hard ball, instead tennis balls or plastic replica of cricket ball are used on Indian streets.

Original cricket ball is a hard cork covered with smooth leather. Most remarkable thing is seaming of two semi-spheres of leather which goes around the circumference. Seaming line is very strategic for bowlers, they use it for grip and spin. The color of ball is generally red but in the flood lights this ball seems brown and batsman can't clearly distinguish it from the pitch, so instead of red white balls are used in flood lights.(weigh 163 gm and circumference 9 inch).

Tennis Balls are generally fluorescent color for better visibility in high speed and are covered with felt material, this fur texture gives the aerodynamic property for speeding ball. And a curve line moves throughout the ball giving it characteristic look.

Earlier tennis balls were made from wool and leather, other light weight fillings were also used covered by string and cloth.Now the balls are made from rubber with hollow interior. (weigh 58 gm & circumference of 7.85 inch)

Uniqueness of this ball is three holes,used for holding and griping of the ball while throwing it towards 10-pin.Generally three holes are for ring finger, middle finger and thumb, there might more holes for ventilation and other griping issues. Another interesting fact is that the holes doesn't have any standard size or position, professional balls are made without any holes, buyer or user is free to drill anywhere he likes.

The balls were first made from wood and hard rubber then the plastic was introduced for making it, later plastic was improved to polyurethane and it continued to improve by different procedures.The ball is quite heavier than all balls which we discussed above but smaller than a football. The material from which it is made is not so dense that why the core of the ball is separately filled with denser material to make it heavy. The position of this core in the ball and center of gravity are strategic for players and it also decides where to drill the holes.

surface of the ball is smooth shiny and bright colored and sometime adored with patterns. circumference 26.7 inches (67.8 cm) to 27 inches (68.5 cm), weight should not be exceed from 7.26 kg.

Hockey ball also is hard plastic ball, some time the core of the ball is made from cork and outer is plastic, color is mostly white but may exist in different colors so it can be used on contrasting fields.The balls come in two surface texture; one is plane and smooth which can be used indoor on dry surface, and second is dimpled or dented surface which is used on wet surface to reduce aquaplaning.Weight 156 to163 grams & circumference 224 mm to 235 mm (8.8 to 9.2 inch)

These balls are used in Cue sports, these games are played by multiple balls at a time on a special table top. There are 3 major divisions of Cue sports each one having balls of different size and vivid printed 'patterns and numbers' on them. typically there are three kinds of ball in a game 1) solid ball (fully colored with a number printed on it) 2) stripe ball (white ball with a colored stripe on it with a number) 3) cue ball (white ball heavier than other used as a striker) Other physical characteristics are on the link.

In initial times these balls were made from ivory then the concern of nature and wildlife replaced it by celluloid but this material was very explosive and inflammable during manufacturing process. Now these balls are made from different plastics, resins and polyester; strong and resistant to cracking and chipping.

Now the lightest ball in all the multiple-player games, just 2.7 gm and very similar to turtle egg visually. Celluloid or plastic from which ball is made allows ball to bounce more. Number of stars on it indicate its quality the best have 3 stars.Circumference 7.85 to 8.25 inch.