Who Are Peter Pan, Tinkerbell and Captain Hook?

Have you ever thought of dressing up as one of the characters from Disney's Peter Pan? Peter Pan is one of the most popular characters ever in children’s literature worldwide. Peter Pan was the creation of Scottish writer J M Barrie, and the play Peter Pan was first staged in 1904. The adventures of the little boy who never grew up and could fly proved to be hugely successful, and the Peter Pan play and books were adapted into other productions and made into films. And, of course, in the UK Peter Pan is one of our very favourite Christmas Pantomimes! So although Peter Pan never grew up, he did have a lot of friends to share his adventures with. He lives in Never Land with the other Lost Boys, and teaches Wendy and the other Darling children to fly and takes them to Never Land to join in his life of games and fun. But every literary character has his nemesis, and Peter Pan’s is the evil figure of the infamous pirate Captain Hook, who has had it in for Peter Pan ever since he cut his hand off in a duel. However, Peter Pan’s best friend is the fairy Tinkerbell, who flies around trailing clouds of pixie dust. She is very protective of Peter, and can be very jealous if he shows too much attention to any of the others. 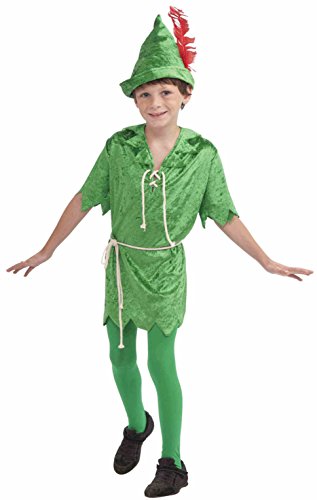 Probably the best know version of Peter Pan is the animated Disney picture that was first released in 1953. J M Barrie had bequeathed the rights of the play to Great Ormond Street Hospital in London and it took Walt Disney four years before he could buy the film rights off them. The plot of the film brings Wendy and the Darling children to Never Land, where Captain Hook’s pirate ship has also anchored, as Captain Hook is plotting his revenge against Peter. Some of Captain Hook’s pirates kidnap Tiger Lily, the daughter of the Indian Chief, and Peter takes Wendy to see the Mermaids. Wendy persuades the Lost Boys to return to London with her and be adopted by her own parents, but they are all captured by Captain Hook as they are leaving. Captain Hook also put a time bomb into Peter Pan’s camp hoping that the explosion will kill him. The trusty Tinker Bell saves Peter Pan and they go off together to confront Captain Hook and rescue the children and the Lost Boys. 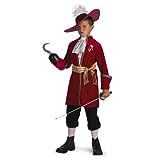 With Halloween and the Holiday Season coming up, you may be starting to think of buying costumes to wear to fancy dress parties. If you are a big fan of the little boy who never grew up, Peter Pan, why not buy a Peter Pan costume online? The Peter Pan costumes that you can buy are generally based on the clothes worn by the Peter Pan character in Disney’s animated classic, in which Peter Pan is a young boy with auburn hair and sparkling blue eyes who is dressed in a green tunic and green leggings. In the Disney film, Peter Pan also wears little green boots and a jaunty green hat. The good news is that whether you are really a little kid or just a big kid at heart, there are Peter Pan costumes available in your size. So whether you are an adult, child, toddler or infant, you will find a huge selection of Peter Pan costumes in your size online. Amazon has a great range of Peter Pan costumes and accessories so why not have a look today and make your choice? Just be careful to check out the description, to see what come included in your Peter Pan costume, as you would not want to find yourself without those all-important green elf shoes and hat! If you wish to buy a Peter Pan hat or shoes separately, then there are also plenty of options online.

Like the Peter Pan costumes, the Tinkerbell costumes available online are based on the animated fairy from the Disney adaptation of Peter Pan. Tinkerbell is also enjoying renewed popularity at the moment as she is part of the hugely successful Disney Fairies franchise and has had her own animated Disney adventures released on DVD recently. To dress up as Tinkerbell, you need to have a floaty green frock, little fairy slippers, some gossamer fairy wings and maybe even a magic wand. There are Tinker Bell costumes available online for all sizes, ranging from infants to adults. Again, be careful to check what comes with your Tinkerbell costume, so that you have all the fairy accessories that you need for your big night. If you need to buy some extras for your Tinkerbell costume, there is a great selection of Tinkerbell fairy wings, slippers and fairy wands for you to choose from. Just trail a little pixie dust around you and enjoy a fabulous time at the party or going out trick or treating in your Disney Tinker Bell dress up costume!

Boo! Hiss! The villain is coming! If you would rather be infamous and notorious when you don your fancy dress for that special party, why not choose to dress up as one of Disney’s scariest villains, Captain Hook? Or maybe one of your children would rather be a baddie and go over to the dark side for the evening? Buy a Captain Hook costume online and have your friends quaking in their boots as they wait for you to make the walk the plank! Captain Hook costumes are also based on the Disney character, and are magnificently dramatic with the pirate’s sword, the hook instead of a hand and the big pirate’s hat. This is also a very versatile costume to buy as it would work for a ‘Pirates of the Caribbean’ themed party as well or for any occasion that requires pirates dress up. There are costumes for grown up Captain Hook’s or kids that want to be the dastardly villain Captain Hook, and there is a huge selection for you to browse and buy on Amazon today. You can also buy Captain Hook accessories separately, so you can buy pirate eye patches, swords, hooks and hats to make your Captain Hook costume look even more authentic.

So whether you want to dress up as Peter Pan, Tinkerbell or Captain Hook there is a huge range of Disney dress up costumes for you to choose from online. So make your selection today and be ready to wow your friends this Halloween or over Christmas with your great costume.