Hands On Is Fun

There was a time when it was considered a family tragedy that someone’s child had decided to find out what makes time “tick” and had disassembled the mechanical alarm clock. Today’s child is just as curious and eager to be hands-on, but the opportunities have fallen away due to all those tablets and smartphones and the digital world in general (and parents being a lot more proactive about leaving tools around). But Mecanno knows that there’s nothing more exciting to a 10 year old than the chance to build their own robot: no, not 100 feet high and with laser shooting eyes, but one that they have built themselves from scratch that can then be controlled. With that in mind, the Erector by Meccano Intro to Robotics Innovation Set is here to reaffirm that the analog way of doing things by seeing, touching, putting them together is still valid. And fun.

This set is all about S.T.E.A.M., the acronym for Science Technology, Engineering and Mathematics, with the obvious heavy accent on the engineering aspect. Not that the other aspects are pushed behind, because mechanical meets electronic in pretty much all cases. There are 12 blueprints provided: these detail projects for creating/constructing/building, which can then be altered or modified in ways that the child can come up with. So it’s not about “painting by numbers” or “following the dots,” but a way for allowing the child to move at his own pace and taking what has been given as a jumping off point. And the fact that it’s educational as well as working the reflexes and physical areas of the body and taking on the old eye/hand coordination is plainly a good thing.

So what exactly can the kid do? Build robots and vehicles and the like. And then activate them and have them move about under the kid’s command — keeping in mind that some creations just need a steady hand to make things work, while others require the addition of technology (and battery power). But because this is about putting things together — i.e., mechanical — not everything assembled has to operate by electronics. Engineering can be about moving parts that operate by hand too. Think of drawing water out of a well, where a handle is turned to raise a rope with a bucket at the bottom. It’s a mechanical operation with no motor needing to get involved. And so it is the same here, although kids and wells haven’t been put in the same sentence anymore, or at least not since Timmy fell down the well and Lassie had to go get help.

So the set has everything that is needed — a plethora of parts and electronics: 375 in all and including an Infrared/ambient light sensor, a high torque motor, Bluetooth module, micro server (plus more) and the tools needed for assembly. No soldering or hammering or the need for wearing protective gloves or safety glasses (though there’s nothing wrong with that). But it’s the Maker tool that is perhaps the most interesting (and different). This tool is designed with a hole punch and a screw gauge. Its purpose is to let the child take common materials and repurpose them into building material — cardboard, foam core, plastic and the like now being the materials needed and found around the house so as to obviate a trip to the hardware store.

Such a lot of stuff needs to be kept together and avoid getting all messy. So all of this comes in a large plastic carry case that securely holds everything until needed (and once something is built it can’t fit in the case, but it can then be disassembled and the parts again stored until the next time). Directions too obviously that cover the gamut of what can be done, but no conventional batteries to power the result (as that is to be supplied by those owning the set).

The Erector by Meccano Intro to Robotics Innovation Set is designed for ages 10 and up. Parental supervision, while not an absolute requirement, isn’t such a bad idea — you don’t want to stifle the kid’s ability to do it themselves, but it can be a cool way to bond. Because who doesn’t like robots? Or creating a whole from parts. For more information go to www.spinmaster.com 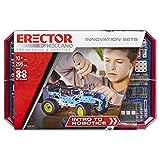