After 14 years of toy purchases, it takes a lot to impress me. Let me tell you what I'm not impressed by: toys that beep, run out of juice, and break on impact. I don't need toys with sound effects that need batteries. I'm looking for tough, enduring toys that can grow with my children. Isn't that what everyone is looking for?

I've always been a fan for Fisher Price Little People toys for this reason, but eventually kids do outgrow these preschool-oriented play sets. But a few years ago Fisher Price rolled out a new line of action figures in their Imaginext line, and I am really impressed with these toys. We discovered these toys when my son turned three and have been steadily building up a collection of Imaginext airplanes, called Sky Racers. Shhhh....don't tell my kids this, but they are getting some for Christmas again this year.

The Appeal of Imaginext Sky Racers

Last Christmas I really wasn't prepared to be impressed by the Imaginext® airplanes. We liked the dinosaurs, and were impressed with some of the other Imaginext action figures, and I had bought several of these items as birthday gifts in the ten to fifteen dollar range, with rave reviews. But I had seen a special edition gift set of the Imaginext Sky Racers™ airplanes, and they just didn't seem very impressive to me. But my husband, who, bless his soul, has a much better pulse on what little boys would like, said, "trust me, I know what I'm doing."

The day after Christmas, we notice our son playing with his new red toy airplanes. His action set came with two planes and two action figures. I was surprised by all of the features on the planes. On one of the planes, the wings moved, the hatch opened, and you could shoot flying discs that came on the toys from the front of the plane. Not only that, the planes came with a grappling hook that seemed to lend the airplanes themselves to some real imaginative play. Each colored airplane is different, so if you get one of each color you are getting a new feature set with each plane, not just a new color scheme.

The play set we bought also came with a DVD, which shows all of the Imaginext action figures having adventures as a group of friends. "Imaginext, Imaginext...we are the heroes of Imaginext!" The DVD has some interesting adventures but from an adult standpoint it is really just a marketing ploy to help kids become excited about the Imaginext brand. I guess that's OK with me, though. It is interesting how completely different the toys in the Imaginext line are, but the folks at Fisher Price have come up with a way to show kids that you don't have to play with matched sets to use your imagination.

My son is now five and as an early kindergartener is moving beyond the preschool age, but I think the Imaginext line of toys will last at our house for 3 or more years, then pass down to his younger siblings. Even his younger sister enjoys playing with these toys. I've been impressed with all of the features on these inexpensive toys, which require good ol' fashioned manipulation instead of battery-operated energy. I also like that they are Imaginext toys don't JUST promote movies. Though we are seeing more of that since the big Disney buyout of Marvel. I'm looking for well-priced toys that we can build into a collection. I think my kids will continue to enjoy the smaller airplanes in red, green, and blue, and I suppose, by next year, they will be adding yellow and black to the mix!

I will be getting the Carrier and looking forward to discovering what it can do and watching my children integrate the new addition into their play, but I'm also considering getting the Serpent Ship or the Samurai Castle, since these items are very reasonably priced at about $30. The smaller airplanes can be found for as little as $8, and I have noticed their prices seem to be coming down. 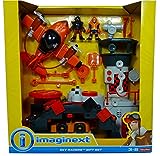 The Price Is Right

As folks continue to struggle with stretching their budget further because prices are on the rise, these toys seem to be a great deal to me. A family with several young kids can get two or three really well-designed and fun toys for about $25, and can splurge for a bigger gee-whiz toy like the Carrier for about $30 if they shop around. I think the Imaginext's airplane toys are going to sell like hotcakes for as long as they remain reasonably priced. At my house, they are a new favorite, and we plan to add more to our collection.

I also feel that I'm getting more for my money with this line of toys than with some of the name brand transporation play sets, like the Thomas The Tank Engine collectible engines, which run between $12 and $20 for the engines, usually sold in two or three-piece packs. Obviously toy trains are not planes, so we are comparing the proverbial apples and oranges here, but I find that building up a collection of Imaginext toys over time is more feasible at their current price points than the Thomas series.

Imaginext is growing in popularity but I've noticed that where I shop for toys at big box stores usually while I am trying to stock up on diapers, these toys are usually available in limited quantities. If you are serious about purchasing these toys, watch for some of the limited edition sets available at Target, or look for them online.

More of My Favorite Games and Toys