In case you missed it earlier today, I wrote a lovely (if I may be so bold) article on the handheld console known as the Sega Game Gear. Why? On one hand, the Game Gear was one of my favorite childhood possessions, to go along with my toy WCW Monday Nitro arena, the Nintendo 64 and my two Chicago Cubs hats. At the same time, the Game Gear, along with Nintendo's much more popular Game Boy, was part of a video game movement that was quite popular in the 90s; the handheld console craze. Yes, Sony may have the PSP, Nintendo may have whatever odd new aged Game Boy thing they have now, and I'm pretty sure we're two or three years away from Microsoft unveiling the X-Box's first ever handheld console (my prediction for a name; the X-Box Spy. Get it?). But while the technology may be better and the goal of companies making handheld consoles remains the same today as it did twenty years ago (money, money, money, money...MONEY!), the handheld console war back in the 90s was far more captivating than it is now. Then again, everything in the 90s was more captivating than it is now. Especially music? Remember when music involved instruments being played and didn't actively suck? Pepperidge Farm remembers.

But enough about me telling all these horrible new recording artists to get off my lawn, it's time to get to the point. Which is simply this; what handheld console, the Game Boy or the Game Gear, was better? Naturally, I'm sure there's a large amount of gamers out there who haven't heard of the Game Gear and loved the Game Boy, which thus makes it the clear cut favorite. Of course, it's not that simple, and I think a closer look will show these two excellent pieces of hard ware are much closer than one thinks. Luckily, I'm here to break it down and see which one does end up better in the end. Seriously, what would you do without me? Probably read luchablog a lot more than you already do (that's a joke for my lucha libre fans, first time gamer readers!). But I'm wasting time now. Let's figure out which is better; Game Gear or Game Boy.

Design: Very close this one. On one hand, the Game Boy is small enough that it's easy to carry around anywhere and lasts for an awfully long time, whereas the Game Gear pretty much needs a computer bag and more batteries than Alan Wake needed in Bright Falls. On the other hand, the Game Gear is big enough that you're definitely not straining yourself to play it, while the Game Boy could potentially lead to you wrestling carpal tunnel syndrome in the main event of Triplemania. Do I really have to decide?! I guess...I'll give it to the Game Boy. You can take it anywhere! I mean yeah, you can take the Game Gear everywhere too, but it's much more of a hassle. And people don't like hassles. Or Salsa Doritos evidently. Can someone bring that and Surge soda back full time already?! Slight Edge: Game Boy

Graphics: Let me put it this way; one of these systems had color, the other didn't. And no, the Game Boy color is a separate thing and thus doesn't count. Go ahead and skate around with the Stanley Cup Game Gear. Huge Edge: Game Gear

Features: Again, really simple here. The Game Boy, as great as it was, pretty much just allowed you to play games, and occasionally trade Pokémon with other players via a game link chord. The Game Gear allowed you to watch TV and convert Master System games due having a much larger hard drive. It's not even close. Can you believe the Game Gear is legitimately up 2-1 in this battle right now? This is like the Miracle on Ice, except it's not. At all. Why did I even say that? Huge Edge: Game Gear

Game Library: This is where the pendulum swings the other way. Look, it's not like the Game Gear didn't have games. There was in fact over 300 games for the system, and as already stated, several Master System games could be converted for the Game Gear if players had the right technology to do so. That's part of the problem though; many of the Game Gear's library was made up of games from the Master System or the Genesis, meaning you didn't really need it if you had one of those other systems. The Game Boy blows it out of the water. It had over 700 titles, most of those titles were made specifically for Game Boy and no other system, and even the games that were made for other systems were made vastly different for the Game Boy. Thus this is a no brainer. Sorry Sega, but that game library can be best summed up by the terrible Orlando Bloom. Huge Edge: Game Boy

Longevity: On the surface, this is the Game Boy. It ran for fourteen years total (1989-2003), compared to the Game Gears mere seven year run (1990-1997). That said, the Game Boy also has the edge in the most important aspect of this category; replay value. I'm not saying the Game Gear doesn't have replay value, because it does. The Game Boy just has more. How many kids are still to this day taking Game Boy's with them on vacation to play Pokémon, Mario Golf or the numerous other great titles Game Boy had to offer? I'd venture to guess there's a great deal of them. Combine those two categories, and this is a win for Nintendo. Somewhere, Peach is baking a cake in celebration that surely won't lead to Mario having a massive adventure when he goes to eat it. Edge: Game Boy

Winner: If I'm being honest, the Game Gear is a better system overall. Yup, you heard me right. Sure it might be flawed, and sure it might not be a classic in the same way the Game Boy is. But from a technical standpoint, there's no question the Game Gear is superior. It had better graphics, a better hard drive and a design more fit to players (though not a convenient size). If you gave the Game Gear the game library to go with that, we're having a much different conversation right now. In a fair world, the Game Gear wins this.

And yet, it doesn't. The Game Gear might've had the technical superiority over Game Boy, but it doesn't have the intangibles. The Game Boy always lived up to its promise. The Game Boy produced a great game library and a reputation that's still highly regarded today. The Game Boy was the first of many successes for Nintendo's handheld consoles, where the Game Gear didn't produce any. Sure there's many different reasons for that, but in the end, those reasons don't matter so much as the end result. And the end result is that the Game Boy was more memorable and more loved than the Game Gear. Thus, it's better. I don't like saying it, and if I were giving into my biases, this would be a tie. And frankly, you should go out and get both of them, as both systems are well worth checking out. But in the end, Game Boy just barely takes the victory. Excuse me while I go sit alone in shame.

That's it for me tonight guys. Sadly, the Ultima Lucha column will have to wait another day, but I promise I'll do everything I can to get it released tomorrow. Till then, buy Game Gear, buy Game Boy, make sure that you get a hold of one of the Pokémon games, know there's millions of videos on the internet that show you how to get Mew, watch Verano de Escándalo tomorrow, don't forget your Dew, always watch Scream with the lights on, never ramble on at the end of the column for no good reason at all (like a certain someone is doing right now) and behold the return of the DUCHOVNY meme! 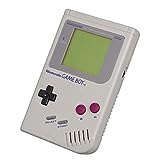 What handheld console is better?