We were introduced to the game by our relatives in Reno. We noticed a huge deck of cards on their kitchen counter and asked what game they played with all of those cards. Turns out they play Hand and Foot almost everyday. They taught us and we brought the game to our Arizona home. It became a regular afternoon game break for us. We passed it on to relatives and friends who likewise became addicted to the game. Turns out that the game is played all over; we found an active Hand and Foot group at our recreation center. It seems that every group plays it just a little bit differently!

There are cards everywhere. You start off with a fistful, and draw more. Over time all those cards end up in front of you taking over the tabletop.

Hand and Foot is a great card game, a variation on Canasta. The object is to build a seven card set of any one suit (7 Kings, or 7 fives or 7 Jacks, etc.), which is called a Book. A natural set has no wild cards and is called a Red Book. You can use wild cards to make a Black Book. Get the required number of Red and Black Books, and get rid of all your cards fist and you win that hand.

Four hands make a game. The person (team) with the most points at the end is the winner. A score sheet tracks the scoring, and acts as reminder of the game structure.

This is a game for two or a group

We play the game with two, three, four or six people. Two players is a heads up game. Three players is a cutthroat game. Four or six are a team game.

We play the game often with other couples. My wife and I play it often as a mid afternoon break from the computer or quilting. We alternate Hand and Foot with Spite and Malice, which is a two-handed solitaire game. Can you use two-handed and solitaire in the same sentence?

The following description is for a two handed game of Hand and Foot plus rule variations for four or six players.

Lots of decks, lots of cards

Piatnik 00 2895 Card Holder Black
If you play a card game like Hand and Foot, you'll appreciate a card holder like the one we use.
Buy Now 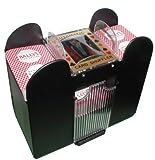 Use four Decks of cards. Each player gets 30 cards. Rather than deal all these cards out one at a time, each player picks a stack of cards from the pile, If you pick the exact amount of 30 cards, you get 100 points. Put 15 aside for your foot and start play with 15 in your hand.

A variation in pick up rules for two handed is to pickup eight cards, when you can play the top card properly. This allows for serious hand and board building, but also can lead to runaway scores.

A variation to team games is to increase the number of cards picked up as you move through the four hands of play, e.g. two cards in first hand, three cards in second hand, four cards in third hand, five cards in fourth hand.

The Pickup and the Discard piles

Each player draws two cards and discards one card.

Jokers and two's are wild. A wild card can be combined with a pair to make a set that can be laid down.

The number of actual cards you use must be one more than the number of wild cards. Example: you cannot lay down two wild cards and one Jack; it must be two Jacks and one wild card.

Sometimes with beginners, we simplify the lay down and allow a player to get their board started with any set of three of a kind. No point minimum.

Getting started laying down card sets

To begin laying down card sets, you must meet a minimum count:

As the play continues, you can add like cards to a set that is laid down. You can also add wild cards. There mist always be at least one more natural card than there are wild cards.

A set of seven like cards (e.g. seven jacks) is a red book. A red book is complete. You cannot add to a red book.

A set of seven cards that includes any wild cards is a black book. You can continue to add natural like cards to a black book to increase your point count.

Some people call a red book, a clean book. That makes a black book a dirty book. Go figure!

Going into your Foot

The first goal with your hand is to get down with the required point count of sets.

Going into your foot quickly is important! If the other player, or team, goes out before you get in your foot, the point count in your foot is subtracted from your score.

The winner is determined at the end of the fourth hand.

The player, or team, with the highest point total is the winner!

The number of cards drawn from the unused pile and from the discard pile can increase from hand one to hand four.

The number of books required to go out can increase from hand one to hand four.

With four players, you can divide up into two teams: women vs. men, couple vs. couple, republicans vs. democrats, you name it.

With six players, you divide up into two teams of three each.

Is this your hand and foot?

Probably not. It seems there are as many variations to the game as players. Different point counts? Different number of books needed? Different rules for going down? out? winning?

There are lots of variations, but most players agree that it is a lot of fun. It's also a lot of cards!!

Have you played Hand and Foot? What variations do you play?