I was at a bit of a loss as to what to get my husband for Chanukah this year, so I poked around Amazon until I found a game that I thought he would enjoy: Dominion. Dominion is a customizable card game where the goal is to develop a deck that contains as many victory points as possible. The backstory is that you and the other players are all feudal lords, trying to gain control of as much land as you can, while fighting off incursions from the neighboring lords. My husband really likes strategy games, and though I've never enjoyed them, the box said the game would only take half an hour to play, unlike marathon games of Risk or Axis & Allies. I figured that I could manage that to keep my husband happy. But a funny thing happened -- as soon as he taught the family how to play, we all fell in love with the game, and now he hardly gets a chance to use it!

How to Play Dominion

Each player begins the game with three estate cards and seven copper coin cards. On the table are piles of victory cards in different denominations (estates, duchies, and provinces); copper, silver, and gold coin cards; and ten sets of kingdom cards that you choose. This is the brilliant part of Dominion: every game is different, because you can choose any ten out of the 25 sets of kingdom cards that come in the base game. (As you become more experienced, you can buy expansion packs, which makes the replay value nearly limitless.) Each type of kingdom card allows you to act in different ways. Some cards give you extra actions, so you can use more cards from your hand in a single turn. Other cards give you extra opportunities to buy additional cards, or extra coins so you have more buying power in that turn.

Each turn has three parts: an action, a buy, and the clean-up. Draw a hand of five cards from your deck, play an action card (or several, if you can stack up extra actions). Once you're done with actions, you use the coins in your hand and any on your action cards to buy one or more cards, depending on whether your actions cards offered you extra buys. When you're done, all the cards that you played and the ones remaining in your hand go into your discard pile. Don't worry -- you don't lose them. Once your deck is empty, you shuffle your discard pile and start over with that as your deck. Play goes around the table, and continues until the pile of province cards is empty, or three other piles of cards are empty. Then each player tallies up the victory points in his hand. The player with the most victory points wins. 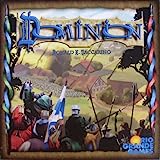 Dominion
You'll need to buy the base game or Dominion: Intrigue to get started, but after that there are nearly a dozen expansions to choose from.
Buy Now

Dominion and its various expansion packs appear pricey at first, but once you amortize the cost over how many hours you will have fun playing it with family and friends, you'll see that it offers tremendous value. These are the expansion sets available:

For ideas about how to mix and match cards and build decks, you can't beat Dominion Deck Builder.

Dominion is a great game for adults playing with other adults, or for adults playing with kids. It is labeled 13+ on the box, but with a little coaching, my five-year-old son who is still learning to read caught right on. (He plays chess, too, so he has a good attention span for games, and understands the concept of strategy.) My eight-year-old daughter absorbed some master strategy from playing with my husband, and now she stacks up actions like a pro. We play all the time as a family, or in twos or threes. My husband and I have also had the opportunity to play with some of our friends, and we had a fantastic time.

Some benefits of playing with other adults are that the game moves a little faster (everyone can shuffle his own cards!) and you can play with more vicious attack cards, if you like that sort of thing. But you can't beat it for family time--what other game could keep a family around the table for a 45-minute stretch, laughing and having a great time?