How to Play "Ghost in the Graveyard" Outdoor Party Game

Halloween Is All About S~C~A~R~Y

Many children's outdoor games are handed down, remembered and enjoyed from one generation to another. I can remember playing Kick The Can, Dodge-ball and several different types of "tag you're it" games back when we were kids. These were especially fun on warm summer nights when they were played with a big group of kids. The way we always felt about it was "the more kids playing, the better".

There is another kind of tag game that is fun for Halloween, or for any time in the fall. After kids have eaten all that sugar and need a great way to burn off some of that excess energy, try getting them involved in this game! Here is how to play "Ghost In The Graveyard."

Ghost In The Graveyard Outdoor Game ~ Fun For Halloween Night Or Any Night!

Ghost In The Graveyard is a game that has also been handed down and is actually a reverse kind of "tag you're it" game. In regular tag, one player closes his eyes and counts and everyone else hides. Then when time is up, the counter goes running to find everyone and tries to tag one person, then that person becomes "it".

In Ghost In The Graveyard, one person is chosen to be the ghost. That person runs and hides while everyone ELSE covers their eyes (or just closes them) and NO PEEKING! Once the ghost is hidden, the rest of the group chants in a slow rhythm "one o' clock, two o' clock" until they get up to twelve o' clock.

Then they yell something like "It's midnight! Will we see a ghost tonight?" Or a similar chant from a childhood rhyme like "starlight, star-bright, wish I may, wish I might... see a ghost in the graveyard tonight!" Kids can get creative with this part, and say this line any way they want to.

A place will need to be chosen to be a "safe" place, or a home base. A patio works great, or everyone can place their hand on a tree to be "safe." Just so everyone is touching the safe spot while they are chanting "one o' clock" and so on.

When everyone reaches "Midnight," everyone should let go of the home spot and run off looking for the "Ghost In The Graveyard." If anyone sees the ghost, they should yell "GHOST IN THE GRAVEYARD" and attempt to run from the ghost. Everyone else should also run and try to reach "safety" without being tagged by the ghost.

When the ghost catches someone, that person also become a ghost that everyone else should try to stay away from. This game can get kind of wild depending on how many "ghosts" there are compared to the other kids.

A different way to play, which is especially good for little kids who don't want to run too far away from safety (or for their parents who don't want them running so far away) is when a new person is tagged and becomes a ghost, he (or she) is the only ghost. This keeps kids from running too far to attempt to get away from an abundance of "ghosts". The more ghosts there are, the faster and farther kids will run when they are trying to get away from them

The important thing is to be sure everyone knows the rules before the game starts. This can keep arguments from ensuing. And I do remember kids arguing over rules when we played these games as kids! For younger kids especially, at least one parent "referee" is a great idea to keep the game going smoothly and to make sure everyone has fun.

Those who have made it back to the safety base begin chanting again, and everyone who has become a "ghost" then runs and hides. The game continues until everyone has been caught. Then the LAST person to be caught becomes the first "ghost" for the next game.

An alternate way to play this fun game is to have the ghost lie down on the grass.Then, everyone encircles the ghost chanting "Ghost In The Graveyard One o' clock, Ghost in the Graveyard two o'clock," and they keep going up until "Midnight" is reached.

Then, the ghost jumps up and tries to tag someone as everyone takes off running for the designated safe base spot. The first person tagged by the ghost becomes the new ghost in a new game. The new ghost lays down on the ground and the game begins again. This also could potentially be a less scary version for younger kids. Although any version of this game can be scary for little ones, so parents should watch while kids play the game to be sure no one is becoming too rambunctious or too scared.

Heart rates can go up and kids can get pretty excited when they play this fun game, and things can get out of hand. Depending on the kids ages, a little parental guidance is always a good idea to help to keep things on an even keel.

Another Fun Way To Play ~

One more fun version of the Ghost In The Graveyard kids game involves a much calmer and more of a humorous way to play the game. This is a good way for the game to be played for when parents don't want kids running throughout the neighborhood screaming, depending on what time it is in the evening!

There are basically three steps to play the game this way. First of all, choose one person to be the ghost. Then all of the other players lay on the ground surrounding the "ghost." The kids lying on the ground make up the "Graveyard."

The ghost counts to three. The graveyard players lay as still as they possibly can, I mean, don't move a muscle! The ghost then tries to get someone to move, by whatever means possible. He can tell jokes, he can yell at them, he can laugh, whatever he wants to do to try to get one of the "Graveyard" players to move. He CANNOT touch anyone, though, so nothing like tickling is allowed.

The first person to laugh, move, or make any type of noise becomes a ghost along with the original ghost, and together they try to get another "graveyard" person to move. The game continues until everyone has become a "ghost." The last person to become a ghost gets to begin the next game as the ghost.

This is really a great alternative way to play the game indoors if weather does not allow kids to play games outdoors. They can have fun in any type of weather this way.

In some areas outdoor weather, especially on Halloween, can be very unpredictable. It can range from warm and nice, in the 60's or so, to brutally cold in the 30's and can even include rain and drizzle.

This makes having an alternate way to play the game so important. Try playing "Ghost In The Graveyard" sometime. It's so much fun either as a summertime game, or as a fun game to be featured in a kids Halloween party. Giggles and shrieks will abound. And once the parents stop screaming...

OK, so it will most likely be the kiddo's doing the screaming and laughing, but it is a very fun and exciting game for any age. It is even fun for the spectators watching the game, and makes a nice addition to the traditional Halloween party games like "Pin The Nose On The Pumpkin" and "Bobbing For Apples." 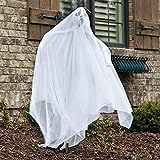