How to unlock all cards, Magic the Gathering 2015: Duels of the Planeswalkers

Magic 2015 - Duels of the Planeswalkers is part of an award winning series of video games based on the first real Collectible Card Game (Magic: the Gathering).

This game has a couple features removed from the previous year's game (Like two-headed giant). The game launched unsuccessful as a pay-to-win advantage, that was corrected in the first expansion pack. Here are some of the mixed reviews for this game

I think this game still has a lot going for it, and is worth a play for any card game connoisseur. This is not my favorite game in the franchise, but I think it is being overlooked by most people because of bad reviews. The unlock system for the card collection is a little bit repetitive, but fun in a random booster pack kind of way.

Where to Buy the Game

I have played this game on tablets and it is slow and awkward. You can get this game for mobile devices for "free" but it is really a demo, and after you unlock all of the features the game is still about $15 with the expansion... about the same amount on the computer (without sales). There are far less players to play multiplayer on the mobile servers.

They kind of built the menus to cater to touchscreens, but I've found the computer is the most comfortable format for this game. I haven't tried on Xbox, but I'm sure it's fine on there too.

I love the idea of the Humble Bundle, I feel a lot better buying games from them because I know a portion of the proceeds goes to a good set of causes. If you are buying for PC, please consider buying from Humble Bundle! You can ever write off a portion towards your taxes because you can put part of it is a donation to charity!

How to Unlock the cards

I have been playing Magic: the Gathering for about 18 years, and I'm pretty sure I understand the fundamentals of this game. I didn't have to, but you can choose to play through a tutorial before you can get to start the game (and collecting cards). it took me a couple hours to get through the tutorial! (I didn't see the skip button...). Then you choose a deck. You can choose whichever color combination you like, but I would suggest grabbing the black/red to start (I'll explain later).

To unlock cards you will have the option to play a story mode, "explore each plane when they are unlocked", and multiplayer matches. I would suggest going through the story mode and at least unlock all of the planes first. After that is complete you can grind the "explore" mode in each plane to unlock each card for each plane. Then once you only have the Battle Boosters left, go online and play against real people (you will have a more competitive deck if you wait until all the offline cards are unlocked first).

After you win your first match on the story mode you will get one card based on the deck you began with. The next three story matches you complete will give you three card mini-boosters. After that every match gives you a full booster pack.

The original release of this game incited outrage among Magic: the Gathering fans. You could not complete your collection of cards unless you bought "Premium Booster Packs". After much rage and flaming from the forums and social media, not to mention a huge dip in sales, Wizards of the Coast decided to change this with the release of the expansion pack "Garruk's Revenge". You can now unlock the cards that were previously only accessible by buying premium packs. You can get "Battle Boosters" from winning multiplayer matches.

The best strategy to playing magic the fastest way possible, and also with the smallest amount of cards is always going to be aggro decks (Aggressive Deck). These are decks with cheap creatures that have haste or large (and pump-able) attack power. I have in the past made fun blue and white aggro decks, but the best option is red, because you can throw in burn that will end the game quicker or let your creature through with creature destruction. If you took my advice and grabbed the black/red deck at the beginning of the game, you can eventually get the black out of that deck and start working on your aggro red deck.

You are only allowed to have 4 of each common, 3 of each uncommon, 2 of each rare, and 1 of each mythic in this game (unlike the standard 4 of each card). Magic 2015 has it's flaws, but it's still a pretty fun game. If you truly like Magic: the Gathering this is a great chance to get some practice, but is still a bit of a long grind to complete. I don't support pay-to-win games, and I refused to buy this game until the pay-to-win advantage was taken away. You can get every card in the game buy grinding, but you still have the option to buy the cards as well.

If you are lazy, rich, or just don't have the time to dedicate to unlocking all of the cards there is another option. You can buy the unlocks for each plane and the battle boosters. The whole thing will cost you around $40 (before taxes that may apply due to country)! The unlocks are now significantly cheaper on mobile ($2.99 instead of $4.99 per plane). Here are all the unlocks you would have to buy to get all of the cards, just check the DLC options from in-game or from the various store pages to get these. I recommend just playing the game, it's fun. 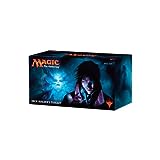