L'Drago is currently the second most powerful attack type bey (the once most powerful beyblade before Pegasus), and is owned by the evil main character, Ryuga. He is a deadly Chinese dragon with dark aura surrounding his body. Intimidating its opponents, L Drago often walks away victorious. Currently, the only battle he appears to lose in is against Pegasus. After this, Pegasus becomes the number one powerful bey. There is some confusion between Pegasus and Ldrago being the most powerful. In the metal fusion series, he defeats Pegasus first, but is later defeated by Pegasus. Because of his spin-steal ability, however, he is able to take the power from other beyblades and gives it to himself. Ldrago is the only Metal Fight (Metal Fusion) beyblade to spin to the left which results in counterclockwise or rightward movement. 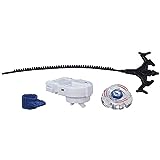 L Drago has 5 parts: the facebolt, energy ring for Ldrago, fusion wheel lightning, spin track 100 low profile, and performance tip HF. Of course, you can exchange parts to make him even more powerful. He has the ability of having two modes by turning the energy ring. Red sticker showing is “multi hit mode”, and yellow sticker showing is “upper mode”. Upper mode seems more effective with “Smash Attack” which often leads to a stadium out for the other bey. I would recommend using higher spin tracks to attack the opponent at a high angle, therefore managing a more powerful attack. The stats are 17 stars for attack, 2½ stars for defense and 3½ stars for stamina. Because this beyblade is so focused on Attack, its stamina and mostly defense is very low. I would recommend bey arenas that are easy to perform a stadium-out. His Facebolt has a large dragon head on it and the name written on. The energy ring has 3 dragons, with red eyes, usually clear, but gold in special edition. The fusion wheel has 6 spikes and there should be 9 yellow stickers on the flower petal like blade with 3 on each blade. There should be 1 red sicker on each dagger like blade. The spin track is a low profile track because there is a better chance of Ldrago hitting the opponents' spin track when they are losing stamina. The performance tip is a HF which means “Hole Flat”. Put the parts together by adding the layers from performance tip to Facebolt then tighten the performance tip clockwise and the Facebolt clockwise.