An AFOL. I love talking about, creating and playing with LEGO bricks.

Today we will be taking a closer look at Flashback Shredder set number 5002127. This set came out in 2014, has 6 pieces, and was designed for people 6 and up.

The main antagonist of the Teenage Mutant Ninja Turtles was available for free as an exclusive promotional polybag with purchases of $75 or more at the LEGO Store. This would be the first and only minifigure to represent a young Oroku Saki before he became Shredder.

While the pants are a common black piece, his torso piece would be an exclusive print. It’s this top piece that shows off the great detail of his gi. LEGO took the time to put the folds into the top, so it looks like fabric wrapped around his body and the top opening shows off his well defined muscles from years of martial arts training. While he is probably a black belt, he wears a purple belt. This makes a nice contrast for the colors and matches the black and purple uniforms worn by the Foot Clan. As the undisputed leader of the Foot Clan, it’s important for Shredder to have the Foots logo printed on the front of his gi and largely displayed on the back.

To help you better recreate the epic battle scene between Shredder and Splinter that would forever change their fates, Oroku was given two faces. The first features the focused scowl of a villain ready to do battle and hold nothing back. The other features the scared face that would cause him to hide his face behind a menacing mask. I love the detail put into the mutilated side of his face. It looks like an actual burn.

You might recognize his black hairpiece from past Robin minifigures.

For his accessories he was given the claws that have contributed to his more recognizable and menacing name...Shredder.

I’m really glad to have this minifigure added to my collection for two reasons. First his scared face could be very useful for custom minifigure and stop motion work. Second, because LEGO lost the Nickelodeon licensing right to Mega Construx, we will probably never see another classic shredder minifigure again making it extremely unique.

Do you want this set? 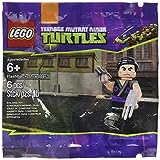