What Lego Duplo Sets Are Available From Disney's Planes Movie?

We sat down recently and watched Disney's Planes movie. Yes, we were a bit late getting to it despite the fact that it was on my husbands watch list. What we discovered when we finally watched it is a lovely animated film that little boys in particular and even little girls will enjoy for years to come. It was nice, therefore, to discover that the Lego company has released several sets in the Duplo line for children aged two to five years of age that are Planes movie themed.

With names like those, you know that Lego has managed to include a number of the main characters that your children love in the movie. If you have young children who love planes you won't want to wait because they will be grown up before you know it!

This set, called Dusty and Chug by Lego, includes two of the most important characters from the movie. Dusty is the little crop duster who dreams of being a racer and Chug is the fuel truck, friend and staunch supporter of Dusty.

This is the smallest of the three Duplo Planes sets, containing 16 pieces that include an attractive plane, truck and fuel pump.

LEGO's Disney Planes Dusty and Chug is recommended for individuals aged 2 to 5.

The Ripslinger’s Air Race set includes two more important characters, Ripslinger and El Chupacabra. Ripslinger is the fastest racer around. However, he doesn’t play fair and isn’t liked by many. El Chupacabra, on the other hand, is a friendly Mexican plane with a whole lot of personality.

This is the medium-sized set, with 41 pieces that include the two planes, a fuel can, the trophy and assorted building blocks.

Skipper’s Flight School set includes three planes – Skipper, Dusty and Sparky. You probably already know who Dusty is. For those who do not know, Skipper is a Navy Corsair who was a respected flier and instructor with the Jolly Wrenches squadron until a combat mission gone wrong left him unable to return to duty. Sparky works for Skipper's Flight School and is assistant to Skipper Riley.

Ripslinger's Air Race is the largest set in the Disney Planes series. It has 53 pieces that include the two planes, forklift and Skipper’s hangar. 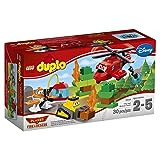 This set was released in 2014. It has 30 pieces and is recommended for children aged 2 to 5. My husband LOVES the helicopter. Yours will, too!

Any of the Disney Cars & the Planes Fire and Rescue Team Duplo set would be great additions to a collection that includes any or all of the original Disney Planes sets.

The Planes Fire and Rescue Team, set 10538 is shown here and is readily available from Amazon by following any of the links on this page.

The following sets are all retired Disney Cars Duplo sets and are arranged in reverse chronological order.

The retired sets are available from resellers in new and used condition from eBay by clicking right here. You will find more availability for some of these older sets and less for others but you should be able to use eBay to obtain any of these sets for your child's collection.

Are you a fan of Duplo? Of Disney's Planes movie?