When I initially stumbled upon a free game application on Amazon for something called My Singing Monsters, I never realized the journey I was about to take. It seemed like a silly children's game, but within no time, I became obsessed. I constantly breed new monsters, acquire new islands, bake food for the monsters, feed them, buy them their favorite decorations, and allow them to rock out on their islands. These monsters take up a lot of my time. In fact, an embarrassing amount of time and energy is spent on these guys, so I will leave out those details. I've found out along the way that some life lessons can actually be learned while playing My Singing Monsters.

Sure, the monsters are cute and fun to watch. Yes, I know the game is purposely addictive so you might spend real money buying them food, treats, etc. I mean, you don't want your favorite Furcorn not to get to level 15, do you? Doesn't he deserve to be with his friends and sing his best song for the world? So yeah, I get it. Even Kristian Bush from the band Sugarland has gotten in on the action. He played the game so much and tweeted about it, so the makers of the game asked him to record some music for his own monster. Now, not only is there a Shugabush monster, there is indeed an entire island devoted to him.

No matter how addictive this game may be, there are life lessons to be learned while playing it. Forget about actually using real money to succeed in the game. Forget about obsessing over getting the best band together on Shugabush Island (even if I've been doing just that recently). As an adult, I feel like many of the My Singing Monsters lessons are lessons I should have already learned, but sometimes the game helps remind me. For adults wondering if this is a good game for children, I would say many valuable lessons can be learned.

I think the most important lesson taught while playing My Singing Monsters is patience. This happens to be a trait that I need to work on. Not everything in life is going to come easily and sometimes you must wait a while. I will give you a couple of examples of how patience is important to My Singing Monsters success.

If you want one of the best monsters on your island, you are going to have to wait. Some monsters are only seasonal, such as the Punkleton that comes around in October. Did I want the Punkleton sooner that that? Of course I did! But am I a grown-up and I sometimes have to be patient to get the cool skeleton monster with a pumpkin head.

Even when a monster is available, it may take many attempts to successfully breed a monster. I personally tried the correct breeding combination at least 10 times before the Punkleton was born. Even after I was finally able to breed him, you can't get the monster immediately. Once again, it is all about waiting. Sometimes it takes up to 2 days of incubating and 2 more days of keeping the monster in the nursery before you can even put him on your island. Patience is essential!

Behind the Scenes - My Singing Monsters

As I previously mentioned, you can often use real money to make purchases on the island. However, if you are patient, you can eventually earn enough monster coins to buy monsters, food, decorations, and other important monster necessities. I believe many valuable life lessons can be learned when players must decide how to spend the monster coins and diamonds earned throughout the game.

For instance, there are many circumstances when a player must decide how to prioritize the money. Sometimes I'd like to buy plenty of food for the bakeries, but if I do that, I can't afford a decoration one my monsters really likes. Monsters are happiest when they have the decorations they prefer, yet they need to be feed to advance to other levels. Sometimes you have to decide if you want to spend your money on being happy or paying for practical things like food. Unfortunately, just like in real life, you can't always have both.

The singing monsters also earn money when they are placed on islands. I suppose they are making money because they are singing and that is their job, but honestly, I've never quite figured that one out. Who knows what jobs they do when I am not around? At any rate, each monster earns at a different rate. Some monsters automatically make a lot of money because they are such great singers or play an instrument. Other monsters make more money as their levels get higher. And still, the happier a monster is feeling, the more the monster earns. So this teaches kids another valuable life lesson: everyone needs to earn money. The more money you earn, the more stuff you can buy.

Speaking of stuff you can buy, I haven't even mentioned the castles yet. Each island has a castle for the monsters. As the monsters multiply, you must upgrade the castle so every monster has his or her own bed. You have to spend coins or diamonds for each upgrade, so you have to make sure you've got the finances for it. You don't want to have a bunch of baby monsters running around and no bed for them, right?

Aside from teaching financial responsibility, My Singing Monsters also teaches children to be responsible for another life... even if it is only the lives of computer monsters. The more you feed the monster, the better the level. The more attention you give your monsters, the more money you make. When you give your monsters things they like or allow them to be with their favorite monsters, they flourish.

My Singing Monsters is probably a good way to see if someone is ready to have a pet. It is also a good reminder that one must be responsible when it comes to reproducing. Eventually the islands run out of space and you must decide whether to get rid of a monster you already have to make room for a new one, or you have to sell the new monster. I would prefer if you were allowed to give the monster up for adoption, but nonetheless, this still teaches children that you can't just keep getting new pets. You need to have the resources and space for new animals.

I am going to be honest with you, not all of the singing monsters are cute. Some of them have a face only a mother could love, and that is still stretching it a bit. When I first saw some of the monsters, I thought, "There is no way I want this on my island!" However, some of the least attractive monsters have the most musical talent or they earn plenty of money.

So what can this teach kids? Don't judge a book by its cover! You need to get to know everyone and accept people (or monsters) for their differences. Some of the monsters I liked the least in the beginning are my favorite monsters now. Are they all cute and fuzzy like the Mammott? No. Can they all be lovely and graceful like the Tweedle? Of course not. But it is easy to love all the monsters since each one is special. 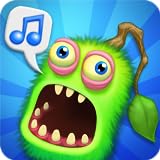 Why You Should Play This Game

If I have not sold you on the awesomeness of this game, I am shocked. It is a learning game without being in your face about it. Sure, you won't learn how to be a better speller or learn the names of the 50 states playing this game, but you might learn a little about patience or acceptance of others without even realizing it.

What I like about this game is it is not a competitive game. You simply play it to have fun. Yes, a couple of my friends are also playing and there are some competitive moments when one of us gets a monster the other one has been trying to breed without success; but still, we are adults and we get over it quickly.

This game allows you to create your own world without being drawn too much into a fantasy. You don't have to write any stories or play with other players online. You are simply able to leave behind all your other worries, even if for only 15 minutes a day to enjoy the sounds of some singing monsters. How great is that?

By the way, for any parents out there, a great aspect to this game is no monsters actually die if you forget to feed them. I know this can be a concern because of other games like this, but there are no deaths in the land of singing monsters. That is one life lesson this game won't force you to endure. The monsters give you a happy and safe environment... and many rocking tunes.