Magic the Gathering Card Analysis: Knight of the Reliquary

About Knight Of The Reliquary:

“Knight of the Reliquary” is a green & white human knight (creature) that is 2/2. It has two special abilities that play off each other.

Knight of the Reliquary is incredibly dangerous on its own.

When mixed with the right cards, Knight of the Reliquary is one of the most devastating cards to have at your disposal.

The card originally came out in “Conflux” which is the second expansion for the “Alara Cycle.”

Due to the colors green and white, Knight of the Reliquary is supposed to be used in a Naya or Bant-themed deck.

The casting cost of Knight of the Reliquary is one green mana, one white mana, and colorless mana.

At first, I was very skeptical of Knight of the Reliquary; this was because I'm not a fan of putting my land cards in the graveyard. I still am not on the basis of your lands providing the necessary mana to power up your spells.

When the “Zendikar” cycle came to be, especially with cards that have the “Landfall” ability, I realized how useful Knight of the Reliquary had become. I first came across the card was when an acquaintance got the card as his designated rare during a draft at a friend's house.

I was dismissive of the card at first and I would soon regret that.

I got slaughtered by that card during a draft tournament at a friend's house.

I lost so bad to that card it wasn't even funny. I lost painfully being on the receiving end of Knight of the Reliquary.

Before I talk further about the card, Knight of the Reliquary is a rare card in Conflux. It got reprinted as a rare for “Modern Masters.”

Then it got reprinted as a mythic rare for “Duel Decks: Knights vs. Dragons.”

What does Knight of the Reliquary do?

A 5/5 creature for three mana isn't that bad.

By tapping Knight of the Reliquary, you sacrifice a Forest or Plains, then you search your library for a land card and put it onto the battlefield. After that, you shuffle your library.

Meaning, you have a chance to constantly pump up Knight of the Reliquary.

Knight of the Reliquary is very ridiculous, in a good way, when combined with the Alara and Zendikar cycle cards. When Alara was still legal in Standard format, I created an “aggro-mill” deck that relied on landfall and mill cards. That allowed me to win in two ways with one way getting rid of my opponent's library and the other way by overpowering my opponents with sheer brute force. It was one of my most fun and entertaining decks to date.

There are plenty of good cards to combine Knight of the Reliquary with. 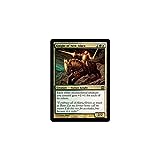 “Avenger of Zendikar,” from “Worldwake,” is a 5/5 green elemental creature that costs two green and five colorless. When the creature enters the battlefield, you get a 0/1 green plant creature for each land you control.

If you have six lands on the battlefield, then you get six of those creature tokens, but the Landfall ability makes Avenger of Zendikar dangerous.

When you trigger its Landfall, each plant creature you control gets a +1/+1 counter.

Say that you used Knight of the Reliquary's main ability and searched your deck for a “sac land.”

If you have “Doubling Season” on the battlefield already, the combination of Avenger of Zendikar and Knight of the Reliquary is lethal.

Triggering Avenger of Zendikar's Landfall, as long as Doubling Season is in effect, doubles the +1/+1 counters your plant creatures get. Using the scenario of two +1/+1 counters, it would be four instead of two.

Those plant tokens would become 4/5 creatures, giving you a bunch of strong attackers and defenders.

That would make most opponents think twice before attacking you.

“Emeria Angel,” from Zendikar, is very useful when combined with Knight of the Reliquary.

You can use Knight of the Reliquary's ability to trigger Emeria Angel's Landfall, spawning a bunch of Flying creatures.

If your opponents have no defenses against Flying creatures, take full advantage of this creepingly devastating combo.

Make sure you have enchantment spells that grant all your white creatures +1/+1.

The combination between Emeria Angel and Knight of the Reliquary is pretty simple enough to understand.

The combination of “Hedron Crab,” from Zendikar, and Knight of the Reliquary is my most favorite combination. You have to be a true sadist to use this combination. This is my most crucial combo when I had my aggro-mill deck. Hedron Crab is a simple 0/2 blue crab creature. It's good as a blocker; but, you don't want to waste the Hedron Crab that way.

It's useful because of its Landfall. When you trigger its Landfall, a target player mills the top three cards of his/her deck. If you have enough sac lands and a couple of Hedron Crabs on the battlefield, you will annihilate the opponent's deck. This is how I usually won with this deck; I made sure to have other ways to mill my opponent as well.

If you're lucky enough to play “Rite of Replication” and pick Hedron Crab, your opponent might as well concede the match.

Magic The Gathering - Hedron Crab (47) - Zendikar
Hedron Crab from Zendikar is one of the crucial cards I had to use when I created by Bant-themed aggro-mill deck. I liked being able to combine the abilities of Knight of the Reliquary and Hedron Crab, respectively, to pump up the latter while taking away my opponent's option. I also loved the combination when sac lands are also in play because I can do more damage. The Hedron Crab is a vital threat when it is used in the right combination.
Buy Now

If you can pull off a green, white, and black deck, then “Ob Nixilis, the Fallen” is very valuable. These three colors rarely work with each other due to black being antagonistic to both green and white. This card is a 3/3 black legendary demon creature from Zendikar. Ob Nixilis, the Fallen is dangerous due to its Landfall ability. Whenever its Landfall is triggered, you can choose to have a target player lose three life points. Then, you put three +1/+1 counters on Ob Nixilis, The Fallen. If you use Knight of the Reliquary and get a sac land, you can make a player lose six life instead or make two players lose three life each. Then, Ob Nixilis gets six +1/+1 counters.

You don't need to imagine much if you have Doubling Season. But, a good black card to combine the two creatures with is “Wound Reflection.” If an opponent has lost life during your turn, then the life points lost is doubled. Putting together those cards together gives you a very evil way to dispatch all of your opponents.

“Derevi,” a mythic rare from “Commander 2013 Edition,” is a 2/3 green, white, & blue legendary bird wizard creature with Flying. Its second ability allows you to tap or untap a target permanent whenever Derevi enters the battlefield. Furthermore, if Derevi or another creature you control deals combat damage to a player, you can tap or untap a target permanent. You don't have to think much on the potential when combined with Knight of the Reliquary.

Knight of the Reliquary is a very useful card on its own. You don't really need to combine this card with other cards, but where's the fun in that?

It's ability compliments the abilities of many other cards.