How to Make the Game Board for Sequence

Back of Sequence game board

The Sequence Card Game is a fun game for two people up to eight people, or for partners. Just this last Christmas, my grandson (21 yrs. old) asked if we could play Sequence. I don't think we had played this game for many, many years. When I first made the game board, we played it all of the time. It is a game that even young children can play, but adults enjoy too--also fun game for adults to play with young children. My son, who is a fifth grade teacher in Minnesota, asked me to make one of these gameboards for his classroom.

Take your deck of cards and cut each card exactly in half, including the two jokers, but not the jacks. Glue these cards to the top of the plywood, using the pattern in the picture. The four joker halves are placed in the four corners. If you notice, the jacks are not glued to the board. Jacks are wild cards so are not used on the board itself and can be discarded. Once the cards are attached to the plywood, place the plexiglass on top. Bolt the plexiglass to the top of the plywood square with the cards attached, using the pre-drilled holes in the corners and middle of the sides. Glue the two 1"x18" and the two 1"x20" pieces to the sides of the bottom of the plywood, matching the holes with the holes in the plywood. Screw the plexiglass/plywood unit to the smaller plywood pieces using the smaller screws. Glue smaller 1"x6" piece to the center of the bottom of the plywood, for stability.

To finish, type up the instructions for the game on a piece of paper and attach those to the back of the gameboard. To play the game, you will need two decks of cards and poker chips or other markers. Each player needs one color of chips/markers and you also need white chips for everybody to use to mark their winning sequences of five cards. I have included a picture of the instructions for your use. 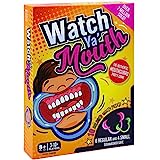