The pro are you can use you models again! With the disaster that is the age of Sigmar for long-term Warhammer players Kings of War is an excellent game to transfer to. Most of the armies are covered as are most of the models, albeit not exactly the same as in Warhammer. As they say a change is as good as a rest.

Kings of War is well balanced, nothing is invincible or gives you an automatic win. Spam type armies struggle and a mix armed type army seems to be one of the more effective. On the Mantic Website they are the basic rules and 70-80% army lists, this effectively lets you try the game before you buy, what could be fairer then that?

Mantic do not prevent you using "alternative" models in there official campaigns/tournements unlike some others, they also have there own range which is excellent for bulking out your army or adding that unit you haven't collected yet.

Good as it is Kings of War is different, its less complex which makes the game a lot faster but lacks some of the more obscure endearing (or annoying) aspects of Warhammer. Gone are the "fluke" or "super power" wins such as Purple Sun of Xereus that let you either fluke a win or come back from a massive loss.

Magic items are limited to one per unit/character,no-one is running round tooled up so well they are practically invincible.

Due to the lack of small points that you can add selecting Kings of War armies can be different to get use to from other systems. That said it does make army selection that much faster.

Units in Kings of War come in several different sizes troops, regiments, hordes and legions. They have an overall nerve value, this is a kind of combination between wounds/damage and leadership. The fact that either the entire unit is still on the board or is "removed" as a casualty makes for a much faster game (compared to removing one model at a time). There is also no flight or fleeing once the unit is done for it is removed.

These rules allow you to base you units accordingly, it also allows for more modelling opportunities. As you have a given base size dioramas are much easier to plan and utilise., it also allows you to stretch a unit if your a few models short of the actual number. 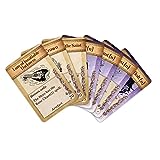 Kingdoms of Men - All rounder's, neutral rather than good

Force of Nature - the trees and beasts unite!

Forces of the Abyss - From the lower levels!

How to play Kings of War

5 stars for Mantic: Kings of War