A Complete List of The Minecraft Lego Toys and New Sets

The History of Minecraft Lego Toys

Combining the art of Lego construction with the open-ended sandbox game that is Minecraft, Minecraft Lego Toys successfully unites two highly popular creations. Lego was created in 1934 by The Lego Group, a company based in Denmark in the Jutland area in the North of the Country. They started to produce Lego Miniatures in 1978. It’s estimated that they have produced 550 billion pieces of Lego. Enough toys to keep any child happy for many years! Lego is a Danish play on the words “play well”.

Minecraft, in case you haven’t heard of it, was originally a PC Game (it’s now a video game currently on all consoles and mobile devices) where players have to mine 3D blocks. This then means the gamer can create or craft items from their 3D surroundings and items. It’s considered one of the biggest grossing games of all time having sold over 55 Million copies to date across all known gaming platforms. Minecraft was founded and created by a single Swedish computer programmer a guy by the name of Markus "Notch" Persson. The game is referred to as a “sand-box” game in that players can do as they want, within the game types defined by the Minecraft Servers. Creation and destruction, mining and resource hunting, crafting and building are all essential elements of Minecraft. 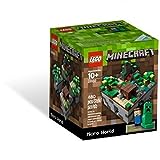 Because it is a microworld, you can easily tell what each piece represents as you are clicking them into place.

In 2009 Mojang continued their best efforts to build develop and publish the Minecraft game until they eventually sold all rights to the Microsoft Corporation for a stunning $2.5 Billion US Dollars. This perhaps begins to explain why Lego are heavily pushing Minecraft products.

The first Minecraft Lego toy was released on June the 1st in 2012 and was called the “Micro World the Forest” set no 21102. However as you’ll see many more releases are going ahead! 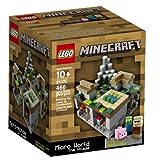 Why Minecraft Lego Toys Work the Best of Both Worlds

By combining the physical real-world building of the Lego toy with the virtual in-game characters and monsters from Minecraft, Minecraft Lego Toys are sure to be a top hit for Lego collectors and fans as well as making ideal presents for kids and Minecraft gaming enthusiasts.

Minecraft as a game focuses on promoting creative play building or mining with virtual 3D cubes. Once materials have been collected from these blocks, actual crafting can begin. Lego on the other hand allows for a physical creation to actually take shape, with kids, children and fans alike using their imagination to continue building what they have pictured in their mind. And this is why the combination of Lego and Minecraft works so well – they are essentially the same toy or game, just set in different mediums.

The Minecraft Avatars and Creature Mobs and What They Mean – Hostile, Neutral or Passive?

Complexity and Themes in the Lego Sets

What we are seeing then with Minecraft Lego Toys is a complexity based on the total number Lego pieces available in each kit. With the Cave (set 21113) running with 249 pieces (the lowest) up to The Mine (set 21118) with 922 pieces. This multifaceted count of pieces indicates how much building can be done with each set to some extent. Each set in the series also features a hostile mob that will attack the player in Minecraft. This creates interesting Lego game play as a set gives both a goody and a baddy, or protagonist and antagonist.

If we look at the Lego series from 21113 onwards (all released in November 2014) we can see a steady rise in the complexity of pieces.

Its also interesting to note that the release dates of new sets looks like it is increasing. We can see that from the information below. This means we are going to be very likely seeing newer additional Lego kits themed on Minecraft appearing in the not too distant future.

Set names remain true to the game. Each Lego set is a unique tangible area within the game and this gives players and collectors a definitive identification and sense of familiarity. Maybe the famous Danish firm where testing the waters with the early release in 2012 of Minecraft sets. However with the number of release scheduled in 2014 and the complexity of pieces it’s fair to say they’re hitting both the Minecraft and Lego toys into the marketing stratosphere.

Rate as Your Opinion Counts

As great as both Lego and Minecraft are in their own right, to see a synergy between the two is truly amazing. Not only do the Minecraft Lego Toys capture the imagination of every builder and creator on the planet they make perfect presents for every child or kid who has a shared interest in these great hobbies.

The merger between two powerhouses that are Lego and Minecraft is not an event that happens every day. We can expect to see a huge interest in hardened fans and casual gamers alike. Collectors of both Minecraft and Lego will need to get hold of these kits to complete their Lego toy collection. Players of the Mojang classic will want to add these Lego sets to their Christmas wish lists. Minecraft Lego Toys for many years to come will still make the best present anyone could wish for.

The Best Minecraft Lego Toys as a Present

If you had to buy Minecraft Lego Toys as a Present for your Kids What would you Choose?

Did you find the - Minecraft Lego Toys Hub Useful?