Take a break from your ordinary day and find inspiration for your own layout creativity. These online diversions feature wonderful trolley model layouts using, in most cases, far less area than the traditional model railroad pike. They only prove that small spaces can still provide big detail, extensive operations and expansive delight.

This club, located in Los Angeles, California, promotes the use of modular trolley layouts as a way to practice the hobby at home, and yet be able to join individual efforts into large layouts for shows. They primarily work in HO scale, with a focus on Pacific Electric, and power their cars from live overhead. However, they boast streetcars from several eras and lines, including a subway module controlled with DCC (Digital Command Control). They welcome newbies who are willing to learn. Check out their website for more information.

At most U.S. railway meets, traction models, if they exist at all, are tacked on as an afterthought to more conventional railroad layouts. In the U.K., model trolleys, known more locally as tramways, get their shows. The layouts are smaller than their American cousins, but display a high degree of detail and all the character of British personalities. Many are framed like precious animated artwork.

This HO shelf layout hails from Australia. I know almost nothing about it, except that it was exhibited in a 2004 shows. The commercial models of Australian trolleys exist, they usually need some assembly, since the body and motorized chassis are bought separately.

This N-scale jewel was built with Tomix track, which boasts easy assembly of street track sections. The video shows how you can put them together to create a complete city line. Note the lack of overhead or poles, though the manufacturer does make catenary supports. The pike is also small, which is typical of model railroading layouts in space-strapped Japan. The system is available in the U.S. but tends toward the expensive because it is imported.

This pike mixes kit-bashed and custom-built G-scale Pacific Electric trolleys, which ply their routes at the Los Angeles County Fairgrounds in Pomona, California. It lays claim to being the oldest and largest garden railway in the U.S., having been originally built in 1924 and moved to its current site in 1935. Over 7,000 feet of track sprawls over a 30,000-square-foot area. There are no overhead wires or trolley poles because the builders were concerned about people tripping over them.

If you'd like to add your own favorite model trolley videos to this list, leave a link in comments and let everybody know why it's good. If I get enough links, I may include your contribution in another article.

Do you model trolleys? 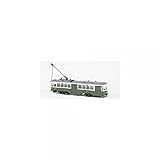