Monopoly would be a perfect Christmas gift for that special friend or family member in your life. I admit I am not a huge fan of Monopoly. I remember playing marathon games in my cousin’s attic bedroom; they would go on for hours and hours and hours. I don’t really have a head for business and money so I was never a very good player. I just wanted to get around the board and not worry about buying property or getting loans or lending money. I don’t remember ever winning a single game. However, many people love this game and would love to get a copy of the game for Christmas.

The Monopoly game as we know it was first patented by Charles Darrow in 1935; it was based on a game created by Elizabeth J. Magie Phillips in 1904. Eventually, Parker Brothers acquired and began distributing the game. The place names were taken from Atlantic City, New Jersey. Each Monopoly game board has 40 spaces; 28 property spaces, 3 chance spaces, 3 community chest space, Income Tax, GO, Jail, Free Parking, Luxury Tax and Go to Jail. Players start at GO and proceed to move around the board by rolling two dice. The aim of the game is basically to win all the money or wait until everyone else is bankrupt. 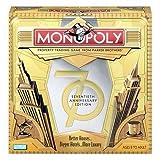 Monopoly is still very popular today and there are a wide variety of games with different themes from the original. You can probably find one that will match the interests of anyone.

There are many different Monopoly games available.

In Beatles Monopoly you collect various albums and houses and hotels are renamed listening parties and concerts. The six pewter tokens includes are of various Beatle's icons such as Maxwell's Silver Hammer and Rocky Raccoon.

In the Spongebob Monopoly game you collect clams instead of dollars.

In Simpson's Monopoly the streets and landmarks are taken from Springfield.

This is the basic Monopoly game. The game includes a game board, 10 tokens, title deed cards, play money, chance cards, community chest cards, 32 houses, 12 hotels and two dice. It also includes rules for a shorter game of Monopoly, which can become a marathon game with the regular rules.

The rules of this game are identical to regular Monopoly, only you get debit cards instead of cash and keep track of your earning on a electronic banking unit. The banking unit uses 2 AAA batteries which are not included. 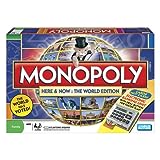 Monopoly Here and Now replaces the streets of Atlantic City with world cities. And, like the Electronic Banking edition lets you keep track of your earnings through debit cards and an electronic banking device.

This is a PC game version of Monopoly. The tokens are animated and the game features bright graphics and music. You can play with up to four friends or play against up to 3 computer opponents.

Whichever version of Monopoly you choose, and there are a lot more versions than what is featured here, you are bound to find the perfect one for the Monopoly fan on your gift list this year.