Monster High is a range of dolls brought out by Mattel back in 2010. Since it was introduced the theme has become massively popular and has spawned TV shows, internet games and a massive range of merchandise. The idea behind the characters is that each one is the son or daughter of a famous monster and they all attend the same school. So as an example, Frankie Stein who is one of the main characters, is the offspring of Frankenstein’s monster. Today though we are concentrating on a different character, Draculaura is obviously the daughter of Dracula and she is one of the most popular characters at Monster High. So let’s take you through the various dolls.

Get The Original Release 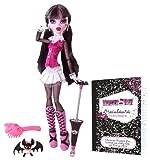 So the line of toys was first released back in 2010 and back then Mattel brought out a line of toys which are now known as the ‘basic’ dolls. The first chance we got to see Draculaura in doll from was here and it would be just what you would expect this character to look like. If you are unfamiliar with the look, she almost always wears a striking pink/purple and black outfit. This particular doll has pink and black boots on, fishnet stockings, a white miniskirt with a pink jacket. Her hair is long and dark with pink highlights. She also has a pink heart on her cheek which is a nice little bit of extra detail.

In this set you get a few nice accessories such as a little umbrella with a bat shaped handle, a comb to brush her hair with, a little diary that you can use and also a little bat which is the characters pet known as ‘count fabulous'. This is one of the classic dolls from the series and has always been a very popular one. Draculaura is seen to be the height of fashion at Monster High and this doll really puts that across. Although this came out a few years ago there are still places you can pick this one up online if you shop around. The basic range of dolls, the first on our list, are often still seen as the most popular and sought after.

Dawn Of The Dance Pack

Dawn Of The Dance

The next series released by Mattel and the second on our list was Dawn Of The Dance. These came out late 2010 as the company tried to strike while the iron was hot and get new dolls out into the market while children were still into them. This series has all the main characters, however Draculaura was not sold on her own in this series. To get her character you had to buy a three pack which also contains Frankie Stein and Clawdeen Wolf. Obviously this meant if you really wanted this one you would have to spend a little bit more money in order to get it.

The three pack features the queen of fashion in a dazzling striped pink and green dress. Her outfit really is good in this one and she is even wearing a mini little hat. These were released as a limited edition set so they are that little bit more difficult to get hold of.

The final release of 2010 was the Gloom Beach range. There was only one set that came out and it consisted of five dolls all in one pack. With this set you get Frankie Stein, Draculaura, Ghoulia Yelps, Cleo De Nile and Clawdeen Wolf. As you would imagine each of the Ghouls is dressed in beach wear and they bring their own unique style to each outfit. Although at the time these were released in a five pack, you can now pick the individual dolls up online now. In this one Laura is wearing a little yellow skirt with the usual black and pink top.

She also has some nice shades on which she can wear over her eyes or just resting up on her head. With the individual doll you also get a little brush shaped like an electric guitar which is quite a nice little touch.

The first chance we got to see Draculaura in 2011 was in a three pack special edition release called Go Monster High Team. This is the cheerleading or fearleading as they are known, squad from school. In this three pack you also get Cleo De Nile and Ghoulia Yelps. This is seen as quite a collectible set and it can be hard to find. The outfits are all supposed to look like cheerleaders, but as you would imagine there is a little bit of a twist to them. We like the foam finger that Ghoulia has one and also the megaphone that Cleo uses.

In this set she is wearing the black fearleading uniform, pink tights and she is waving black pom poms. Her hair is tied up in an very impressive style and she really does look the part. Along with this set you also get a few little accessories such as a school spirit flag, a little handbag and as is often the case another brush. For us this is one of the better packs that contain multiple dolls, the fact that it is limited edition makes this one all the more desirable to people who collect the toys.

Another doll sold separately here. This one came out mid 2011 and was quite a popular one. The outfit is fairly simple, she wears pink high heels with stockings. A cute pink dress that is not quite as bright as some of her other garments. Her hair is down on this doll and it is long and flowing but still has the regular pink streaks we are so familiar with. Possibly the highlight of this outfit are the pink spider ear rings which look really good.

You do get two accessories with this doll. A little key ring with Count Fabulous on and then there is a pink brush as is usually the case. Apparently this one also comes with a change of outfits which will no doubt appeal to some. Of all the releases that have come out this one seems to be one of the more mundane ones and not overly impressive in any way. It was almost as if Mattel were running out of ideas by this point.

Ready For A Slumber Party

Get The Dead Tired Theme 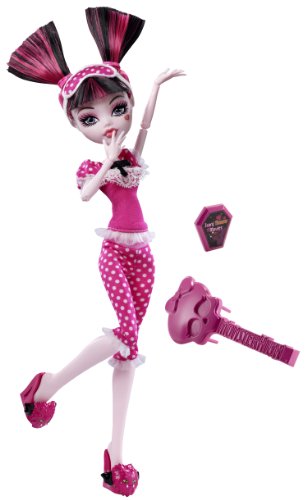 This is one of the more interesting series released on our list by the toy company. The Dead Tired theme came out in mid 2011 and then in 2012 three more dolls were brought out from the series. The theme is based around a slumber party that Frankie Stein is throwing. The idea is of course that non of the ghouls actually sleep, hence why they are ’dead tired’. The first dolls released in this set were Frankie Stein, Clawdeen Wolf, Draculaura, Cleo De Nile, Ghoulia Yelps and Lagoona Blue. Some of the characters even had their very own beds which you can also buy separately.

Laura in this theme is wearing pretty pink Pjs and pink platform shoes. Her hair is done up and in crazy style and as usual her pink streaks are in evidence. It also comes with a little eye mask for when she does finally decide to go to sleep. The accessories feature another pink brush and also a little booklet that says ‘scary human movies’ on it. One of the better ranges of dolls and that is probably why Mattel released a few more dolls from this set in 2012 due to the popularity of the first ones that came out.

Probably the best Draculaura doll out there at the moment. The ghoul finally turns 1600 years old and so is determined to celebrate in style. This series came out late in 2011 and featured characters such as Frankie, Clawdeen, Clawd Wolf and also C.A Cupid. As you would expect this doll is dressed up for a birthday party so she is wearing her best clothes.

The doll comes with a very nice black dress with a few pink bits included as always. She wears bright pink high heel shoes and also has a little pink tiara. The doll comes with lots of extras such as a pink mask for her to wear, an extra skirt that you can change her into, a pink birthday cake, a little headstone with sweet 1600 engraved on it, a pink keyring with a key on it as the standard hair brush that we would all expect. This was one of the most popular dolls that Mattel released and little girls still seem to enjoy getting their hands on this one. It is for us possibly the best one on our list.

In Her Beach Clothes

The final release of 2011 was out just in time for Christmas, hence as you can imagine it sold very well. Skull Shores is another set based on a day at the beach, or to be more accurate they are on a desert island. The theme included Draculaura, Lagoona Blue, Ghoulia Yelps, Gillington Webber and Abbey Bominable. One of the rare themes that did not feature Frankie. All the characters are dressed in summer time clothing set to enjoy the sunshine.

The doll we are interested in here is wearing a pink and white striped top and a little black sarong. Her hair is down in this one and she is wearing pink shoes as is normally the case. In her hand she holds some kind of tropical fruit which has a straw coming out of it. With this set you also get a little treasure map and would you believe it, a hair brush. Skull Shores is a nice little theme although you can’t help think that it is a little bit similar to Gloom Beach.

Ready For The Ball 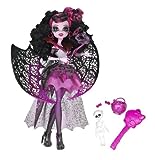 The first time that Draculaura made an appearance in 2012 was halfway through the year. With so many characters now involved the more well known characters don’t seem to be involved as often as they originally were. The Ghouls Rule theme though sees all the big characters with a new doll. The theme is based on a Halloween party in the form as a masquerade ball. As you can see the outfit this doll is wearing is quite impressive. She comes with an elegant pink and white dress that also has bat wings coming out of the back. Her hair is done is a wavy style that we have not seen before.

Along with the outfit there is a nice little mask which she can hold up to her face and she wears a necklace that looks like a big red bat. Included with this one are the standard hair brush and also a little skeleton figure. This is certainly one of the more impressive outfits that we see her wearing.

As you can see Mattel have been very busy in bringing out lots of new dolls on a regular basis. On this page we have only looked at Draculaura dolls and there are so many to choose from. When you think that there are this many dolls for lots of other characters then it makes you realise just how many Mattel have churned out. There are more coming out later in the year and then new dolls planned for 2013. So collectors of these toys are going to be kept very busy. If you are a fan of Monster High then you really should be spoilt for choice when it comes to selecting which doll you want next.