If you know a little girl age six to twelve, chances are she has not only heard about Hasbro's My Littlest Petshop figurines, but she may already even be an avid collector. The tiny plastic bobble-head animal figurines come in more varieties than Spice Girls, and have the same cult following as Beanie Babies or Trollz. They have the same appeal as other small toys like Polly Pockets and Barbie Dolls, but because they are pet-themed instead of fashion themed, many parents prefer them over Bratz and Barbies.

My Littlest Petshop animals are quite small, measuring on average only about 2 to 2 1/2 inches tall. Each pet is collectible and comes with a variety of accessories including clothing, food, and play items which can be interchanged among other similar collectible pets in the series. The pets are sold individually, in packs of two, and in special edition collector packs. In addition, you can purchase themed houses, play centers, and a host of additional unique accessories. Littlest Pet Shop figures and their accessories are available at price points between three dollars for an individual figurine and about $45 U.S. Dollars for a larger play set with accessories. But most of the Pet Shop toys are priced between $5 and $15, which make them popular birthday party gifts. Many preteens enjoy buying LPS toys as birthday gifts because if their friends trade the figurines around, these gifts are a surefire win.

These toys are quite small and not designed for toddlers or babies under three years old, because they may pose a choking hazard. Many of the pets contain magnets that cleverly interconnect with the Pet Shop play houses. The pet play houses are imaginative and ingeniously designed, but after your child has acquired one or two of the larger play houses, you may notice that the real interest lies in the pet figurines themselves. 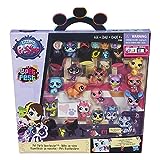 What is the Appeal of Littlest Petshop Toys?

My Littlest Pet Shop toys, shortened into the acronym LPS by avid collectors and their parents, offer many opportunities for pretend and imaginative play to younger girls, and then become a collecting and trading phenomenon for kids as they mature. This is the answer that will satisfy the adults, but kids will probably first say "They're Cute!!!!!" The figurines all have over-sized heads with huge Japanese anime-style eyes, colors that evoke cotton candy, and details that delight. Each of the hundreds of collectible animals, released over a multi-year period, are loaded with personality.

Different figurines are designed to go with a variety of different playhouses, so even if your LPS collector has one play house, you may notice them asking for new houses and figurine sets as they are released.

In my own household, I noticed these collectible toys evolving through the imaginative play stage to the trading stage, and offering preteens who are losing interest in their dolls and dress-up toys the opportunity to play in imaginative ways that were socially acceptable in the preteen crowd.

The owners of Littlest Pet Shop pets often show a preference for one specific type of animal such as cats, dogs, monkeys, or even fish. Though special-edition pets such as giraffes, owls, swans, and even snakes, and especially horses are highly sought-after.

As a response to the collecting phenomenon, toymaker Hasbro has released several limited-edition pets which can sell on EBay and other auction sites for six or seven times their original retail price. Currently in the United States, Littlest Pet Shop figurines can be purchased in two packs at retailers such as Target, Wal-Mart, and Justice, a clothing store for preteens, or just about anywhere toys are sold. Many of the most collectible of these toys are available only online. You can find LPS figurines at retailers such as Amazon, Wal-Mart, and Hasbro's own web site.

Hasbro's Littlest Pet Shop figurines come in two sizes. The original bobble-head figurines are quite small. You can purchase them individually, in two-packs, or in sets. During holidays such as Easter and Christmas, you can sometimes purchase multi-sets of four or more pets for a discounted cost. These pets are often holiday-themed and limited editions, so they are something to keep an eye out for, especially if you plan to purchase a play house or a smaller play sets packs. Some of the larger houses are designed for future add-on modules that snap on to the houses. Some of the older, more popular houses are still hot eBay and secondhand sellers.

In the beginning years of Hasbro's Littlest Pet Shop offerings, you'll notice the pets fit the traditional notion of pet ownership, with a variety of cute cats, dogs, and birds. But during recent years, more exotic animals have stretched the definition of pets to their outer limits, with whales, armadillos, zebras, giraffes, and specialized bird species such as owls and ostriches. The broad-based appeal of these more exotic pets lead me to believe that Littlest Pet Shop has a long life, and I have to admire Hasbro's creative pet creations. Their marketing of the LPS brand name is nothing short of genius.

I recommend if you purchase a Little Pet Shop play house as a gift, that you buy larger play sets for younger children and the smaller sets for the older tween-aged girls. Most tween girls enjoy trading their figurines and often they trade the smaller play sets too. As older girls begin to outgrow their play sets they tend to hold on to the figurines and you will see the larger play houses being passed on to young friends.

The success and popularity of Hasbro's Littlest Pet Shop line can been seen the toy maker's cross-marketing forays into clothing, board games, virtual pets including the Littlest Pet Shop VIPs and the new Littlest Pet Shop Online pets, which are both plush toys that come with Internet Keys to an exclusive, kid-friendly virtual world. Some of my favorite LPS offerings include: