The Nerf N-Strike Vulcan EBF-25 blaster is an automatic machine gun that is the heavy hitter in any Nerf guns arsenal. This review is based on a compilation of actual customer reviews from, Amazon, Toys r' Us, and other major retail sites that provide customer review options.

Since this toy was included in the major Hot Toys for Christmas 2010 lists, stores are having trouble keeping it in stock, so the "where to buy the Nerf Vulcan" question focuses on researching the lowest prices from dependable online marketplaces that can be counted on to have available stock to ship.

If you want to skip the reviews and product information, and just find the lowest price available, click this link to see Where to Buy the Nerf Vulcan Machine Gun at Discount Prices.

What is the Nerf Vulcan Machine Gun

The Nerf Vulcan was the first fully automatic machine gun added to the N-Strike line of new Nerf guns. It is battery operated, (requires 6 D batteries), so you don't have to pump a plunger* before shooting it. It uses a "belt cartridge" system to supply a continuous supply of Nerf darts, and can fire as quickly as 3 darts per second. It can also fire in "precision mode" - one shot at a time. *(single shot mode DOES require a plunger pump action)

Although the Vulcan is a heavy-duty gun, (it weighs about 8 lbs), made of sturdy

What is included with the Nerf Vulcan:

When Kids Get in the Action

The video below shows how much kids enjoy this machine gun blaster.

Note: Take notice that thanks to the famous Nerf foam that the darts are made of, these kids weren't hurt when hit with these rapid fire projectiles. Even at close range.

Kids and the Nerf N-Strike Vulcan

Customer reviews collected from across the Net averaged rating this toy as 3 of 5 stars, and were mostly filled with positive comments. but there were 3 themes that appeared frequently in the reviews:

Most negative comments: Like any toy that starts simple and then gets more complicated, like this new motorized Nerf Vulcan, the probability of getting a mechanical dud goes way up.

Customers that had good luck with their Vulcans raved about them, but customers that had problems, hated them. Unfortunately there were frequent reviews concerning the failure of the belt feed mechanism, it stopped advancing the cartridge belt through the chamber. This seemed to occur most when the gun was used while running around, and such, which causes a lot of unintended belt movement in the cartridge chamber.

Recommendation: Buy! - This is an awesome Nerf gun for kids that are into Nerf guns. You can be sure of being the "King of the Hill", and envy of the neighborhood when the Nerf Vulcan is in your N-strike arsenal. The jamming issue seems to be localized to a certain type of use and is easily corrected.

Where to Buy the Nerf Vulcan

Web research found the average online price for the Nerf Vulcan was $49.99. Although some sites had specials that included shipping, most did not, and shipping costs ranged from $7.00 to $11.00.

The best online deals were found at Amazon.com, the web's largest and most trusted marketplace. Their price for the Nerf N-Strike Vulcan EBF-25 was $44.95 with FREE Super Saver shipping. ebay had lower list prices, sometimes as low as $26.00, but the shipping charges were usually high enough to make Amazon the truly better deal.

**remember - some ebay deals may be one-time offers, if you see a deal you like - make a decision.

Our recommended buying sight is Amazon. You get a guaranteed good price, free shipping, and the peace of mind and dependability of the Net's largest shopping site. 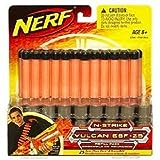 Comments on the Nerf Vulcan?