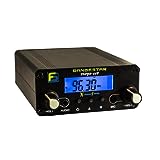 A science fair was what brought me into the world of home FM radio broadcasting also know in many parts of the world as Pirate FM Radio. I was in sixth grade then and was required to submit a science project. Wait. Hubs are supposed to be short.

Anyway, through the years that followed I became more and more obsessed with owning my own FM station that I literally taught myself the fundamentals of electronics for the purpose of designing one. Broadcast FM radio transmitters were non existent in the Philippines. My only choice was to design my own if I wanted to have one.

My first true stereo FM transmitter was designed around the popular BA1404A. I was then in college and only a few hours ride to Manila, Philippines. The setup was fun it covered three dormitories and everybody loved and hated it. We used a cassette player for input and a small fet mic for voice.

Truth be told, in America, what we were using and so smug about was nothing but a kids toy. You can get them in Amazon. Notice those products I displayed... yep... the book, 3 transmitters based on the same chip. I recommend only the book and the $44 dollar transmitter. The others are grossly priced and with the proper electronics know-how, you can squeeze the performance of the two out of the cheaper one. Hahahaha!!!

But I have a secret. In the course of my search around the internet to find the best bang for your buck in acquiring the best quality broadcast fm radio transmitter, I have found found just one site that can be counted upon. If you have read my story in the link above I think you know it by now.

THE SECRET TO QUALITY BROADCAST FM RADIO TRANSMITTER IS HERE.

Oh well the secret is out. Anyway I have presented the Broadcast FM radio Transmitter Setups on that first link. I'd dearly love to create another link here but... I might be breaking a few rules. You can see the setup there.

Anyway once you have your own broadcast fm transmitter you'll also need a quality usb microphone. An old school condenser microphone would also do... but you'll have to spend extra for a mixer and a pre-amp. But chances are you already have a laptop or a desktop so that wouldn't be a problem.

You can get your Broadcast FM Radio Transmitter from the Secret Link Above. This List is for FM Broadcast Equipment

Given the chance, which would you engage in?

Sexuality is a private matter; some believe that broadcasting it destroys the very things that make it sacred. - Lance Loud