Pegasis, or Pegasus, is a very unique variety of beyblade. They appear all to be horse-related beys, specifically the common American mythical creature, the Pegasus. They are mostly attack types and have strong broad preformance tips. Storm Pegasis, Galaxy Pegasis, and Cyber Pegasis are all the variations, plus Stardust Pegasus, Thunder Pegasus, Rock Pegasus, and Torch Pegasus. Both Storm Pegasis and Galaxy Pegasis are also called Pegasus. They all have fusion wheels that have 3 blades like a tornado, designed to knock away other beys. Galaxy Pegasis is the "evolved" form of storm Pegasis, after it was found by Ginga stuck in the wall of a cave. There is also a Gravity Pegasis, which was not seen in the show. 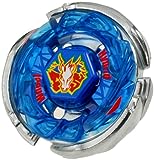 Galaxy Pegasis looks exactly like Pegasus in real form, but as a beyblade there are many major modifications. One for example, is the metal wheel which has a new cool looking metallic blue. The fusion wheel has a new design and is now a translucent electric blue. However, the other parts did not change. Furthermore, Galaxy Pegasis’ attacks consist more of pure force rather than magic. It was crowned the #1 bey in beyblade metal fusion episode 52, when it beat Ldrago. However, he was beaten by Ldrago again later, so his level is constantly changing. In Big Bang Bladers series for example, Storm Pegasus is found lodged inside the wall of a hidden cave. After Ginga finds him, Storm Pegasus “evolves” into Galaxy Pegasus and is put to the test. A new kid named Masamune challenges Ginga and loses in an easy match. Later on, there are multiple scenes where they battle, and with each one Unicorno is sent flying, and Masamune runs to get him back. At the end, Masamune wins an unfair battle.  I would recommend Galaxy Pegasus more since it looks cooler, and its power is higher, not affecting the price.

Cyber Pegasis is a special version of Pegasis that actually belongs to “Ginga’s number one apprentice”; Sora. At first, it was very weak, and when Sora tried to use Cybers starblast attack, it jumped to far and lost in a stadium-out. Constantly, whenever his Pegasis tries this move, his power isn’t great enough. However, Kenta teaches him about creating his own special move, which he does in episode 37. Cyber Pegasis returned battling an evil character named Busujima. Sora told himself to stay calm even though the opponent kept on mocking him. Cyber attacked with mainly force at the beginning, and was interrupted by Ginga. The second round began, and Pegasis used a special move Obi Drive, to knock the opponent out of the stadium. There is not much known about Cyber Pegasis, but the look of Storm Pegasis and Cyber Pegasis are remarkably similar. The metal wheel and fusion wheel have the same details, and they are both horse related beys.

Storm Pegasus is one of the most powerful attack type beys, but has poor stamina and defense. His stats are 15 stars for attack, 3 stars for defense and 2 stars for stamina. His fusion wheel Storm has a sleek and cool design, and is built mostly for attack. However, Storm Pegasis’ Rubber Flat tip gives it aggressive spin. The energy ring for Pegasis is translucent and uneven. I noticed when it spun, part of a yellow area changed height and went down again until it stopped spinning. Just like other attack type beys, Storm Pegasus does look attractive and powerful, but I would recommend exchanging minor parts such as the spin track to improve its stamina. Read more on Storm Pegasis