Pokemon Go: What Is It? Are There Risks?

Performed comedy since the 80s. Married with 4 boys and 4 girls. Wealth of humorous, faith-filled, and fascinating experiences.

Introduction: What is Pokémon Go?

Before 2016, I had not heard of Pokémon "Go." I had heard of the Pokémon trading cards, video games, animated TV shows and toys but was not aware it had moved into the mobile device realm. It is a game where players can capture and train fictional characters in order to form teams for competition. "Pokémon" is short for pocket monster, a Japanese abbreviation and invention. Pokémon Go is a mobile game released July 2016 by a company named Niantic for iOS and Android devices. 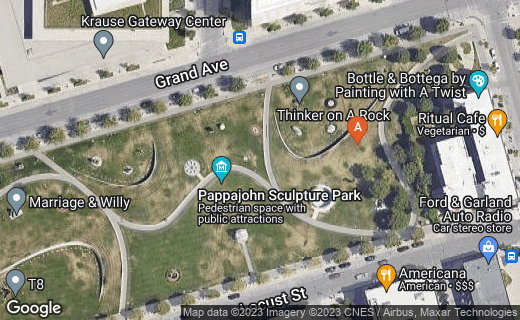 Gamers flock to this location to capture and train their fictional characters in a "gym."

You have to download the free app to your mobile device.There are a number of fictional characters with one of the main ones named, "Pikachu" that players want to capture. You can then train it and other characters in a "gym" and battle other players. That, in essence, is the main objective of the game.

I experienced my first taste of Pokémon Go in downtown Des Moines. While I was driving by the Sculpture park with our 19 year old daughter and 16 year old son, we noticed perhaps 200 people, mostly teenagers and twenty somethings swarming the area. I parked the car and we walked to the park in order to observe. Most of the people were aiming their phones towards the various art sculptures. There was one young lady with blue hair carrying a Pokémon stuffed doll toy. We found out that the park is a "PokeStop" which means it has been marked as a location for Pokémon Go. The app causes your phone to vibrate to alert you to these stops.

My Church is a PokeStop!

On the Monday following our visit to the Sculpture park, I returned to work at my church office. I noticed groups of "millennials" on our property. I stopped and questioned a teenager on a skateboard to find out more. He said that our church was a "gym" and that our Risen Christ statue was a source for Poké Balls used to capture and storing Pokémon. He showed me a picture of the statue on his phone. He then took his thumb, swiped it across the picture to spin it and several red balls came out. I asked him how our church became a location. He said that any place that is a landmark is automatically loaded into the game by way of Google Maps. Who knew? I explained to him that I am the Business Manager for the church and had no idea that we were also a location for the game. I told him I had reservations about people on our property because of insurance and liability concerns. He said that he is a Christian and sees it as an opportunity to welcome and evangelize people.

Visitors come to our church at all hours of the day and night. I interviewed some of the people who have stopped by. Pokémon Go gets people off their couches and out and about. The game encourages people to have some fun. Moreover, the young man on the skate board said allowing people on our church property might be an opportunity to lead them to Christ. MinistryMatters.com suggests that churches should consider water stations and a place where visitors can charge their phone. While I'm not ready to go that far, I agree that it can be an opportunity to evangelize through a warm welcoming smile.

Further, the Diocese of Green Bay, Wisconsin offers a number of suggestions for evangelizing and welcoming strangers who come for a visit. Some of them include offering free wifi, placing welcome signs and providing a book for prayer requests. They also quote Saint Pope John Paul 2 who says that missionaries, "must immerse themselves in the culture of those who to whom they are sent...."

Missionaries…must learn the language of the place in which they work, become familiar with the most important expressions of the local culture, and discover its values through direct experience. Only if they have this kind of awareness will they be able to bring to people the knowledge of the hidden mystery [of God] in a credible and fruitful way.-Saint Pope John Paul 2

While there are some worthwhile considerations as to the beneficial aspects of the game, I still have some reservations. Our church insurance company previously had us install signs that say, "No Bikes, No Skateboards, No Trucks" to discourage trespassers because of liability issues. In addition, the gamers visit at all hours of the day and night. An increase of strangers on our property could be an opportunity for mischief. Though it cannot be directly linked to Pokémon Go, the Des Moines Sculpture park was vandalized during the time the gamers have been present. Police have warned players to be respectful of public and private property and mindful not to be trespassing.

In Missouri, there was a report of teenagers playing the game who were lured into a parking lot and robbed. A quick Google search reveals accidents including two men falling off a cliff and a player who crashed his car into a tree. This and other incidents have lead to the prompting of public safety notices by authorities.

Christians have raised concerns that Pokémon has New Age themes and links to the occult. What is the occult? According to Christiananswers.net, "The word “occult” is generally associated with secret knowledge and practices dealing with the supernatural or “psychic” phenomena, often for the purpose of obtaining personal power. Some occult practices rely on demons or “spirits” to achieve their goals."

One of the Pokémon characters, "Jynx" uses "psychic energy" to perform attacks. But how concerned should we be as parents or as users of this app? Are there varying degrees of the demonic or New Age religion attached to the game?

Holy Scripture warns us about the occult.

10 Let no one be found among you.... who practices divination or sorcery, interprets omens, engages in witchcraft, 11or casts spells, or who is a medium or spiritist or who consults the dead.

This is a fairly stern warning, but let's also consider the following before drawing conclusions.

Catechism of the Catholic Church

You might not follow the Catechism of the Catholic Church. But here are some words of wisdom to prayerfully ponder:

Part 3: "You Shall Have No Other Gods Before Me"

2112 The first commandment condemns polytheism. It requires man neither to believe in, nor to venerate, other divinities than the one true God.

2113 Idolatry not only refers to false pagan worship. It remains a constant temptation to faith. Idolatry consists in divinizing what is not God. Man commits idolatry whenever he honors and reveres a creature in place of God, whether this be gods or demons (for example, satanism), power, pleasure, race, ancestors, the state, money, etc.

2116 All forms of divination are to be rejected: recourse to Satan or demons, conjuring up the dead or other practices falsely supposed to "unveil" the future. Consulting horoscopes, astrology, palm reading, interpretation of omens and lots, the phenomena of clairvoyance, and recourse to mediums....They contradict the honor, respect, and loving fear that we owe to God alone.

Do any of these teachings apply?

So Is It Sorcery or What?

When I was a teenager, I played with the Ouija board. I didn't think much of it but then found out that it is a practice of the occult. I also played a game called, "Dungeons and Dragons." My mother had reservations about me and my friends playing the game since there were news reports of it having attachments to the occult. I argued that I could choose a priest as one of the fantasy characters and I had the power to, "turn the undead." She allowed me and my friends to play it but she still remained uncomfortable.

I have long since given up both of those games. As an adult still growing in faith, I can clearly see the subtle links to the occult in both of the games that I played in the 80s. And I have the same concerns for Pokémon today.

Even though I can't call it outright pagan or Satanic worship, I can see that dabbling with these practices can potentially lead to more serious engagements with the occult. Afterall, we are advised that all forms of divination are to be rejected.

Ouija Board and Dungeons & Dragons I think that it is good for people to get up off the couch and go outside during the summer rather than staying inside and staring at electronic devices. Millenials are coming to church grounds across the country and it is certainly an opportunity to lead them to Christ. This is especially important when National Geographic reports that the fastest growing religion is no religion. So the idea of placing a notebook for prayer requests is worth further consideration.

As a parent of 8 children ages 6 to 19, I constantly hear the refrain, "I'm bored!" We have a list of 100 things you can do. It doesn't include playing on electronic devices. I do hope that one day someone will come up with a clever way to have some sort of moral purpose to Pokémon Go. Our visitors to the church said they are aware that some enhancements are underway. Perhaps Christians could develop an app called, "Deliver us from Evil" whereby you train a Christian for battle against evil forces.

Until then, I will strive to become more familiar with today's electronic culture. I pledge to welcome all persons to our church and be the face of Christ.

Catechism of the Catholic Church. Retrieved from: http://www.vatican.va/archive/ccc_css/archive/catechism/p3s2c1a1.htm

Diocese of Green Bay Department of New Evangelization. A Parish Primer: Responding to Parish Questions and Concerns. Retrieved from: http://www.gbdioc.org/images/Pokevangelization.pdf

Ministry Matters. What to do if Your Church is a Hub for Pokémon Go. Retrieved from: http://www.ministrymatters.com/all/entry/7142/what-to-do-if-your-church-is-a-hub-for-pokmon-go