Before I proceed to guiding you through the basics of Poker, I must warn you that this hub about Poker should not be identified as an encouragement for gambling for money. Gambling is a game of chances and you can lose everything in the blink of an eye. So don't waste your money.

Poker, however, can be played among your friends using Poker chips and without the involvement of money. Money is the root of evil and if things go wrong you will lose both your money and your friends.

This hub is prepared purely for knowledge purposes only. Act responsibly!

Poker is one of the many games that can be played with your average playing cards or a deck of cards. Like all other card games, winning in Poker is based on how good your hand is-which is dependent on your luck. That is why Poker is known as a game of gambling and is used in almost all of the casinos. But if you don't involve money in your Poker game and rather use chips it is not called gambling.

The type of Poker I'm discussing today is called 'Texas Hold'em Poker'. This is one of the most widely used forms of Poker around the world.

How Poker is played...

Poker can be played among anything from 2 to 6 players. There can be more, but it is not recommended.

Poker hand is the two cards you receive which is dealt by the 'dealer'. An independent person or a member of the game can be the dealer, as long as you keep an eye on him. ;)

Each player will receive two cards from a shuffled deck of cards. You can look at your cards as soon as you receive them, because you have to make some analysis and decisions before the dealer unfolds the Flop.

The two cards you get could be anything from a very powerful pair like two aces to some hopeless pair like a 3 and a 8. But hold on! Nothing is 'hopeless' on Poker. You will see why.

Now before you make a decision on betting you need to go through the following picture on what are the possible poker hands you can form with the two cards you have and the five cards that will be unfolded before you. See the picture below.

You must remember all of the combinations above in order to succeed in Poker.

This is to say that your two cards might be two high values, such as An Ace and a King. Or a King and a Queen, or a Queen and an Ace as such. These are also pretty high value cards although not in pairs. You can still get a winning chance with two high value cards. You can still catch a 'One Pair', if you're lucky a 'Two Pair' or a 'Three of a Kind' or even a less value 'High Card'. Still you can bet a considerable amount if you get two cards of high values.

This the exact opposite of the above system. You can get two different lower values (Ex: a 3 and a 6). As a general rule no card can be considered 'useless' until all the five cards are dealt on the table. But generally these small valued numbers have a less chance of producing a wining result. But it is not to say that two lesser values wouldn't produce a 'Three of a Kind' or a 'Four of a Kind'.

So basically nothing can be predicted on Poker until you have seen all the five cards, but still then you may get something wrong.

Watch the video for better understanding on Poker hand rankings...

Poker Hands and your winning...

Notice that there are five cards in each of the Poker hands mentioned above. This is including the two cards you are dealt in the beginning and the three cards that will be unfolded later, known as the Flop and another card named the 'turn' and a final card named the 'river'. Don't worry these are just names gives to five cards that will be dealt face up on the table by the dealer.

Also notice that the above picture shows the Poker hands in order of their power to trump another pair from top to bottom. Eg: The Royal Flush is the bestest hand you can get in Poker and trumps any other hand anyone else has. Likewise a Straight Flush cannot beat the Royal Flush but can beat a Four of a Kind. The hand combinations goes in that order.

So now that you know what are the possible Poker hands you can get, we can get into the betting part.

First of all get some chips and divide them in some order among your friends. Then get the dealer to deal two cards per player. Now take a look at your cards, carefully and remember them. You don't want to be lifting up your cards every now and then to check your cards. That's unprofessional and other players may get a sneak peek at your cards.

Now you may have any two cards from the deck of 52 cards. The moment you see the two cards your mind should be creating mental images as to what the two cards can possibly form or help form any of the Poker hands shown in the picture. There is absolutely no way of knowing what the other five cards the dealer will deal on to the table. So you will have to make a decision based on your instincts. Let me ease up the decision making process... 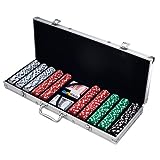 Rather than using money, it is safe to use poker chips when you play with your friends. Different Poker chips have different values which are marked with different colors.

Do you enjoy playing Poker?