Review of Payday Board Game

David has had a variety of life experiences which he loves to share with his readers.

The Versions of the Payday Board Game

There are three versions of the Payday board game. Each one offers something different, so this review will cover each of the following versions:

Overview of the Payday Board Game

The goal of Payday is fairly simple. You progress through a set number of months, earning a salary, buying things, selling things, paying bills, etc. It's basically like real life except with all the bad parts left out. The game has been geared as a learning experience for children. They learn how to earn money, pay bills, save money for future expenses, etc. A wholesome and educational game which is a lot of fun as well.

There is once die, and each time it's rolled a player progresses that many spaces on the board. The board is made up of 31 spaces, which are days of the month. Whatever space the player lands on the player must (or may) do something. For example:

Plus there are many other spaces that require the player to pay a bill, collect money, etc. Just like real life, it can be random when it happens. A player could find themselves with a good opportunity, or be swamped with bills. In the 1970s version, you have a savings account you can deposit funds into and receive interest with. So it's a good tool in teaching money management.

The winner of the game is the player with the most cash on hand as well as in savings at the end of the last month of the game. Most games take 30 minutes to an hour. Setup only takes a couple of minutes, making starting the game over quite easy.

The Payday Game Board

About the 1970s PayDay Board Game

Review of the 1970s Payday Board Game

Unlike other board games, Payday doesn't involve harming or directly competing against others. There is some interaction involved between the players on the board, but it's minor. Each player makes their own choices in how they proceed, much like how real life would be. There is a bit of luck involved. Sometimes you could buy up multiple items but not be able to sell them off in the same month, leaving you in the red. However, since you are only using a six-sided die, you should be able to plan your moves accordingly.

As a family game it's a lot of fun. Up to four players can play in this version of Payday. So an entire family can get involved. It could even help parents teach children what is involved in paying bills and how hard it can be to save money, but in a fun way. The board, the cards, and the money are very colorful. Nothing is bland looking, so the game looks alive. Visually it's a nice game to look at, and the drawings look cartoony enough for children to like.

A group of adults playing the game can have just as much fun as well. You will find yourself telling your adult friends that you wish real life was this easy, or how funny and outrageous the junk mail in the game is. But in the end most adults will only enjoy a few games before wanting to try something with a bit more challenge and with some competition.

Still, in the end I would highly recommend this game because you will find yourself pulling it out to play every few months, making it consistently fun.

Here are the major changes in this version of Payday:

Review of the 1990s Payday Board Game

The revised version of the 1970s Payday added a few new things, but took some things out as well. The number of players were bumped up to 6, the ability to have a savings account was taken out, and there were more opportunities to make money.

While this version would be fine for a larger family to play, it isn't going to teach your children much about saving money. It's too easy to earn money in this version of the game without running the risk of losing too much money. So instead of trying to balance things out and making smart choices, it's a lot more based on luck and amassing a huge pile of money. 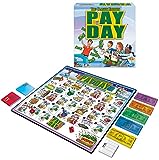 Here are the major changes in this version of Payday:

Review of the 2000s Big Payday Board Game

This version added a new twist to the standard Payday game board. In Big Payday you have the ability to change up the board with new tiles that can be added and removed from the board. This guarantees that no two games will ever be the same. This adds more variety to the game.

As mentioned in the 1990s version, it's not the best version to teach your children how to save and spend money. In this version a lot of it is about buying, even the rules point out that it's the "American" way to make good deals and finance when necessary. This will surely entertain the adults, especially since technology finally caught up with the game with special "Instant Message" cards.

One thing I like about this version is that you have the ability to play the 1970s version of the game as well. This way you can play the Big Payday version with adults for a fun experience, and then switch to the 1970s version to teach your children about saving and spending money.

This version is also hard to find. Check Amazon and other sites to find this version of the game, but expect to pay more than the 1990s version.

What is your favorite version of Payday?

There are other games like Payday that are actually quite decent and teach about how to manage money in other ways. For example:

If there are other games like this, please share them in the comments. I'm always looking for new board games to play. 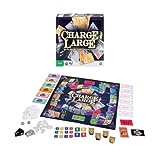