Rio the Movie, Toys and Merchandise

Have you seen Rio the movie yet?  I suggest you do especially if you have young ones.  They will be captivated throughout the show, and so will you!  The animation and colors are captivating.  Every color under the rainbow and then some were used in the making of the colorful birds of Rio de Janeiro.  Not only will you captivated by the colors I bet you will be tapping your feet to the rich Samba music that is all throughout the movie!

The last element I will talk about are the lovable characters in the movie.  Blu the Blue Macaw and Jewel also a blue Macaw meet and have an adventure of a lifetime. Along the way they meet a lot of equally lovable characters.  Of course there are some exceptions!  This cartoon is not without it's villains!

If your child saw the movie no doubt they will want to relive the movie again with Rio Toys and Merchandise.  There are several types of toys and games on the market for your child to enjoy.  And , just remember that a Rio the movie toy is easier to take care of than an actual Blue Macaw.  I got asked DURING the movie if we could get a real bird.

Rio the movie offers plenty of mini action figures!  Here is featured Blu and Rafael in a 2 pack.  These figures are only two ounces and made of plastic. There wings are outstretched and each character is smiling!  There are several variations of this two pack set.  Also available are Jewel and Luis (the bulldog) Nigel  (the villain bird) and Marmus the monkey. Also available are those two comical characters Nico and Pedro.

These Plush Jewel and Blu Macaw are cute and going fast!  The dolls are about eight inches tall with a wingspan of 17 inches.  These stuffed dolls even have the chain that held them together  just like in the movie.  The chain Velcros to their feet but also comes off.

If you just like Blu then here he is!  This plush bird is posable and has a long wingspan. It is eight and a half inches tall. This plush blue Macaw looks very much like Blu.  And remember, a stuffed toy bird is easier to take care of than a real one!

Here is the plush Nico from the movie.  Nico was one of the first birds that Blu came into contact with during his visit to Rio.  Nico is also memorable for his bottle cap hat and his smooth sultry voice! This toy is fully plush and going fast. 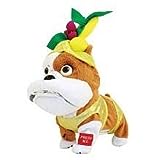 Here is another popular character from the movie! Luis is a dog in the know! The local birds come to him for help with "technical" problems. Luis lives in a garage and has access to tools. Blu and jewel went to see him to get the chain removed from them. Luis did manage to free them, not with his tools but his never ending slobber. "hey it's a medical condition!" This small plush makes a great gift. Hurry though, they are running out!  Oh yeah, "slobber not included!"

Here is the complete collection of the Rio characters ( minus one mean bird)  Included here are Blu, Jewel, Luis, Pedro, Nico and Marmoset.  These toys are officially licensed through Toy Quest and recommended for ages three and up!  Most of the dolls range ins sizes five to eight inches tall.  These six dolls make a wonderful gift!

The Rio movie Electronic Talking Plush Pal Blu features your favorite phrases from the movie.  His beak also moves when he talks.  This plush is about eight inches tall and is fully posable.  This animated toy also comes in the Luis and Jewel characters.

The Rio for your Playstation 3 has seven play modes and eight characters to play.  You can play up to four people and can jump in and out of of the game to challenge your friends. The scenes in the game include the beach rain forest and the streets of Rio.  It comes in Xbox and in Nintendo versions too!