Star Wars The Force Trainer Review: How does it work?

A casual glance at Star Wars: The Force Trainer might convince an observer that some type of magic is going on.The toy advertises itself as a tool to train young Jedis in the ways of the force. What is actually occurring is that Uncle Milton Toys has dumbed down a complicated piece of neuroscience and turned it into an innovative game. So, how does Star Wars: The Force Trainer work?

By attaching a small electrical component to the head, users of Star Wars: The Force Trainer can "levitate" a ping pong ball by concentrating on moving it up and down. How does this actually work? What is the science behind it Is it worth the price?  Read on to find out!

How does Star Wars: The Force Trainer work?

What's actually happening when a user plays with the force trainer is they're using their brain waves to activate a small fan activated underneath the tube. This fan will blow the ball up towards the top of the plastic cylinder depending on the strength of the readings.

The device that attaches to the head is actually an electroencephalogram, otherwise known as an EEG. This is used to measure brain wave activity. Stronger brain wave readings activates the fan, with higher results and longer periods of sustained activity bringing the ball higher and higher.

EEG's are used to read Alpha, Beta, Delta, Gamma, and Theta waves. The Star Wars: Force Trainer likely records and activates based on beta waves. Beta waves are associated with emotional responses and intense concentration. Although any type of beta brain wave activity should activate the fan, the purpose of the game is to encourage owners to concentrate on the act of levitating the ball.

The game comes with multiple difficulty levels, making the fan require higher levels of concentration as the stages increase. The tools used in the game are very basic but are real representations of complex machines used by psychiatrists, neurologists, and other clinical and medical professionals. 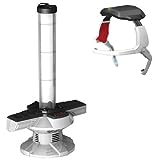 Star Wars: The Force Trainer - For kids or adults?

The short answer is that anyone can enjoy the Star Wars force trainer regardless of age. While certainly marketed towards kids and likely to be a major holiday purchase this December, the toy is sure to peak the interest of a few parents as well. After all, how often can you use your own brain to power machinery? And besides, all of us secretly have a Jedi in them waiting to get out.

In a world where television, toys, and video games all seem to cater to short attention spans, it seems refreshing that there's a product for children that simply encourages concentration. With tangible results, kids can see a physical effect of their concentration on the real world. Of course, they'll probably be too busy being impressed with themselves for performing what looks and feels like real life Jedi telekinesis.

More industrious adults could also use Star Wars; The Force Trainer to teach children about the basics of psychology and neurobiology. Whether in the home or in a school setting, it would make a unique and exciting learning aid.

Star Wars: The Force Trainer isn't the only brain powered toy on the market this year. For instance, the Mindflex Game provides a similar experience with some variations on the outcome. Like the Star Wars force trainer, Mindflex Games power a ball using brain wave activity. However, in this game the ball runs a predetermined course rather than "levitates."

Costing roughly the same as the Star Wars Jedi training simulator, if you're in the market for any type of brain-powered toy as a talking piece or educational toy, either will do. However, the popularity of the Star Wars brand name as well as the personal instruction by Jedi Master Yoda is likely to push most kids over into Star Wars: The Force Trainer's court.

If you're looking for more Star Wars toys, there is plenty of information on The Star Wars Toys your kids are craving.  Where it is for Christmas, a birthday, or just because, there are all types of cool and exciting Star Wars toys, games, and collectibles available.