Stereoviews Investments in History Capturing the Golden Era in 3D

My first exposure to stereo view cards and the viewers which are necessary to properly view them, was back in the early seventies. My dad and I were visiting a local farmer's market and i came across a set and a viewer at a flea market stand. Not even knowing anything about them, and after just one time of placing that curved piece of cardboard in the viewer and looking back into history, seeing the people in the view come alive, I fell in lust. I had just enough money to buy the viewer and a handful of stereo view cards but was challenged because earlier, I came across another piece of history, an antique sit on grinder that I also longed for. I asked my dad which I should get. He suggested that I go look at the grinder again and then make my decision. And so I did taking my time, stopping for a soft pretzel and zig-zagging through the huge crowd. The grinder sure was cool. I even sat on it and pedaled it. This was antique I could actually use. By the time the grinder quit spinning, I had made my mind up. I wanted the stereo viewer and cards. And so I turned around and headed back. To my dismay, I had zig-zagged too much, and when I got back, to the stand, both the viewer and cards had been sold. I left the market that night with the money still in my pocket. The grinder didn’t even seem appealing anymore.

One month later, I opened my first Christmas present, and there, neatly wrapped in tissue paper, was my first, and my favorite stereo viewer and cards. I didn’t care about any of the other gifts. My dad knew,

Since then, my collection has grown into several hundred viewers and thousands of cards.

Stereoviews were most popular between 1870 and 1920 although some were produced earlier and the end life actually to the more modern View-master which uses reels instead of flat or curved cards. By 1870, both amateur and modernized companies began questing for photographs near and far to produce the 100’s of thousands of stereo view cards. The history captured in this form is unlike ever produced before. As time goes on, fewer and fewer of these cards survive, thus making those that have, more and more valuable. What follows is an overview of the matter of collecting and preserving stereo view cards that have captured this important and important part of history.

Back in the seventies, most of the stereo view cards I bought cost me less than one dollar each. Sometimes, if I were buying complete sets, the cost was much lower. For example, I bought a boxed set of 100, “A trip through Sears Roebuck” for right around twenty dollars. (now days I could easily get $1000 for it.)

The value nowadays gets a little complicated. Value as the adage goes, is only as much as a person is willing to pay for it. This is true whether you are buying a home, investing in the stock market, or even in the stereo view ephemera market. This has nothing to do with the value of the card itself, rather the perceived value.

For example, a card collector may be willing to pay six dollars for a generic card, but that same card may be much of much more value depending what was in the actual photographs and pay hundreds of dollars for it. I have paid more than the face value or appraised value for cards such as historical figures. The key is to by any and all cards if you can obtain them for less than a couple of dollars. Over time, all cards increase in value, they are great investments as the rarity of all of them increases every year.

Again, just like value of a card, the buying or selling of views is dependent on different factors. What I would pay for one card or group of cards may be quite different that what another collector would be willing to give. Here is what I look at whether it be buying for my own collection, or selling off duplicates:

Rarity is more about how many of a stereo view are still around and how many people want that particular view. It may not be readily available but the content or subject matter is not that interesting and so the investment value is not that great. That’s generally the views I simply hold onto knowing that in another ten years the value will naturally increase.

The condition of a particular view can be critical to its value. However, depending on the rarity, even a scuffed or edge worn view is still valuable for its very historical significance, especially if the content is such that just having that particular view completes a set.

The content, or subject matter alone can make a specific card very valuable. Nudes are popular, as are public figures, disasters, or slaves. Somewhere in my collection I have a view of three men being publicly executed--as horrifying as it is, it is a rare capturing of a single point in time.

How it was made

I usually value views higher if the card itself was produced using photographic prints instead of the colorized lithographic prints. I also desire stereo view cards that have printing or expanded descriptions on the back;

If you are already a collector then you probably already have your sources or know what and where to look for new views to add to your collection. If you are fairly new or just want to get started, then these following hints may be helpful.

Ebay is probably the number one source (at least the easiest) to shop, and pick and choose. The nice thing is that they are cheap to ship especially if book rate is used. (stereo views do fit the criteria) although it may take just a little bit longer. Views on Ebay generally easy to describe for the seller and the photographs are usually good enough for an accurate assessment.

Although getting rarer to find them at flea markets, sometimes you can get quite a good buy. Flea market dealers many times don’t understand the value

I have a passion for antique stores anyways and so I will spend hours rummaging through all the postcards and ephemera. Many times I will find stereo view cards stuck in the batches of other postcards. If a dealer is familiar with the cards, you can expect to pay more.

Although not the most economical solution, online dealers many times stock the cream of the crop. They are in the business of buying and selling and will hold out with a premium price because they totally understand the intrinsic values. I’ve seen single views selling in the hundreds of dollars...and they get it.

Perhaps my favorite is public sales or auctions. I look for estate sales where the occupants were in their 90’s. It's amazing how many of these views end up in box lots. I will spend all day at a sale just to score a handful of views. (besides that, I just happen to love auction food!

The History of Stereoscopes and Views 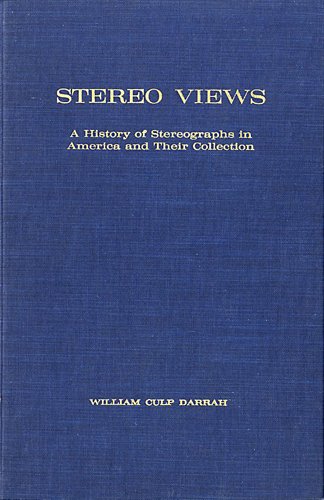 Stereo Views: A History of Stereographs in America and their Collection
Buy Now

What views would be most valuable to you