The world of snooker has produced many great snooker world champions , and it is here I remember it's greatest player; the wayward and controversial twice world snooker champion Alex "Hurricane" Higgins. Those who love snooker, loved Alex Higgins, and his fellow professionals from the world of snooker respected him for his talent and what he brought to the snooker world.

The brilliant and downright outrageously talented Alex Higgins stands side by side with fellow Irishman George Best as amazingly gifted entertainers,Higgins and Best were icons in their sports.They stand alone as true geniuses, whom spectators paid to watch their talents above any other player in their field.

Alex was certainly no angel.In life, or when performing on the green baize,where he made as many friends as enemies.I shall remember The People's Champion at his mesmerising best, with the cue in his hand entertaining all who came to watch him.

These are my favourite snooker quotes from Alex Higgins, The People's Champion

I am a competitive person and, like my old friend Ollie Reed, I love a challenge.

I've never played my best in front of the TV cameras. People just don't know how good I am.

I swear my sons will never pick up a snooker cue.Snooker can seriously damage your health.

I like playing in Sheffield, it's full of melancholy happy go lucky people.

Snooker has gone down the tubes. It has been run by friends of friends who couldn't organise a raffle.

It is all very attractive,the talent,the tears, the tantrums,the highs and lows ,and all the so called human stuff, but underneath there is a selfishness an ruthlessness that makes me look like a choirboy. The People's Champion on Steve Davis.

Anyone who knows me will tell you I am the most considerate and honest player in the business.

I'm a one-off, a mystery man that would drive the world's most eminent psychiatrist to his consulting couch.

Listen, nobody's as fast as me, nobody's as attractive as me to watch. I'm the Cassius Clay of snooker. After The Hurricanes first world championship victory in 1972

I think I was the most natural, charismatic player who ever lifted a cue. 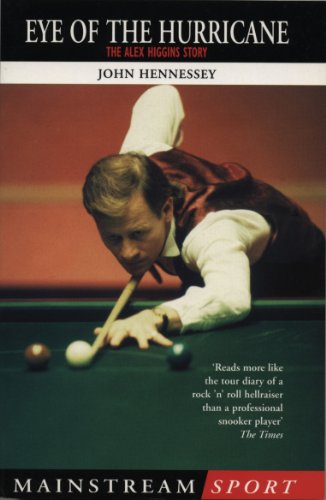 The quotes on Alex from the World of Snooker.

There are two things that brought snooker to where it is today - first one is colour TV and the second one is Alex Higgins. Former PA, Will Robinson

Alex Higgins was one of the real inspirations behind me getting into snooker in the first place. Ronnie O' Sullivan.

He was unique. You'll never see another player in the game like Alex Higgins. Dennis Taylor

He made the sport what it is today, Ian McCulloch

The only true genius snooker ever had. Steve Davis.

They say every genius is bordering on mad and Alex was certainly that. You never knew if he would jump into the crowd or hit the referee or walk out or what he would do. Willie Thorne.

When he came on the scene, he was the major element in transforming snooker from a widely played folk sport into a major crowd and television attraction.Clive Everton

He was the main reason I took up snooker. Ken Doherty.

Alex was a fabulous player and played shots which had not even been thought of at the time. Barry Hearn

He came in and he was enigmatic in many ways, potting balls from everywhere. He was excitable. Ray Reardon.

Steve Davis. You know a lot of people are using two piece cues nowadays.Alex Higgins hasn't got one , mainly because it doesn't come with instructions.

Alex Higgins. Steve? Steve who? Is he the video game player?

When Alex Higgins held a cue in his hand, you expected every shot to be a trick shot.