The Different Phases In A YuGiOh Duel

What are Phases in Yugioh?

During a duel, each duelist take turns. Turns are divided into Phases. Depending on what phase of the duel you are in, you can only do certain things, such as summoning monsters or attacking. The phases go in order, and repeat every turn for each duelist. There are six phases in one turn: Draw Phase, Standby Phase, Main Phase 1, Battle Phase, Main Phase 2, and End Phase.

Preparing For The Duel

Before you begin a Yugioh Duel, there are some things you can do, and some that you have to do.

1) Both Duelists Shuffle Their Decks: Shuffling your decks prevents either duelists to cheat, by having their powerful cards on the top of the deck. You can also cut your opponent's deck as they can yours, however be careful with another duelist's cards.

2)Place your deck and Extra Deck face-down in the appropriate zone. Even if you are not playing with a Yugioh mat, it is good to keep your field nice and organized.

3)Show your Side Deck to your opponent to verify it contains less then 15 cards. This is, again, to prevent cheating.

4)Determine who goes first in the duel by flipping a coin or playing rock-paper-scissors. The winner gets to choose whether they go first or second. The loser gets to choose in the next duel, and if it's a tie, flip or play again to decide.

After you have done all of these steps, you and your opponent can draw five cards and begin the duel.

An Old But Good Beginner Yugioh Starter Deck On Amazon

The Draw Phase is the first phase a duelist goes through when it is their turn. During the Draw Phase, the duelist draws one card from their deck. If a player is unable to draw a card during this phase because there are no cards left in their deck, they lose the duel. After you draw, Traps and/or Quick-Play Spells can be activated before going to the next phase.

Main Action In The Standby Phase: Resolve card effects that can happen in this phase

You will be playing most of your cards during both Main Phase of your turn. During a Main Phase, you can Normal Summon or Set a Monster, change the battle position of monsters, activate card effects, and set Spell Cards and Trap Cards. Although you can do any of these actions in any order, some of the actions have restrictions.

Summon or Set a Monster: There is no limit to the number of Flip Summons or Special Summons you can do during a turn, but you may only Normal Summon or Set once per turn (including Tribute Summons).

Change Your Monsters' Battle Position: Changing Battle Positions include changing a Face-Up Attack Position Monster to Face-Up Defense Postion or vice versa, and a Flip Summon. You may change each monster's battle position except in these three cases:

1)You cannot change the battle position of a monster that was played this turn.

3)You cannot change the battle position of a monster who already changed its position this turn.

Activate a Card or Effect: You can activate Spell or Trap Cards, or the effects of Spell, Trap, or Effect Monster Cards as many times as you can, as long as you can keep paying any cost involved in those cards.

Set Spell Cards And Trap Cards: You can set as many Spell and/or Trap Cards face-down in your Spell & Trap Card Zone during this phase, as long as you have the space for them.

Steps In The Battle Phase

The Battle Phase is where you battle with your Monster Cards. You do not have to conduct a Battle Phase every turn, even if you have Monsters that can attack on the field.

The Battle Phase can be split into steps as shown in the photo.

Start Step: This step is where you announce that your are entering the Battle Phase. The player going first cannot conduct a Battle Phase during the first turn of the duel.

Battle Step: Select a monster on your side to attack with, and 1 monster as a target for your attacking monster, then declare the attack. If your opponent has no monsters, you can attack your opponent's life points directly. After the attack you can proceed to the Damage Step. After Damage Calculations, you return to the Battle Phase and repeat. Each face-up Attack Position monster you control can attack once per turn, however you do not have to attack with every monster if you don't want to.

Damage Step: Each time you attack with a monster during the Battle Step, you enter the Damage Step, which is where you determine any damage done. After damage calculations, you return to the Battle Step.

End Step: After all your battles are done through repeat Battle and Damage Steps, you announce to your opponent that you are ending your Battle Phase in this step.

Replay Rules (During The Battle Step)

After you've announced an attack on a monster during a Battle Step, depending on card effects, the card you are targeting can be removed from the field, or a new monster may be played before the Damage Step due to card effects. This causes a Replay. When this occurs, you can choose to continue the attack on the same target, choose a different monster, or choose not to attack at all. Even if you choose to not attack during a Replay, the monster has is still considered to declared an attack, and cannot attack again until the next turn.

Summon or Set a Monster

Activate a Card or Effect

One of the More recent Yugioh Starter Decks On Amazon 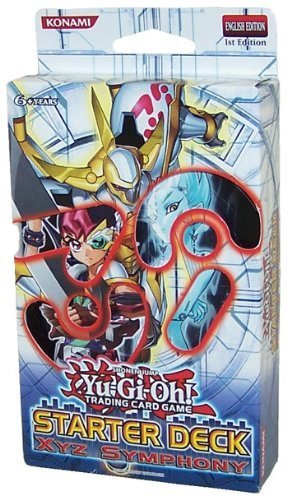 The End Phase is where your announce the end of your turn and the beginning of your opponent's turn. If there are cards on the field that tell you to activate during the End Phase, you resolve those effects in this phase. If you have more then 6 cards in your hand at the end of this phase, you must select and discard cards to the Graveyard until 6 cards remain in your hand.

Actions In The End Phase; Resolve card effects which activate during this phase, discard cards in your hand if you have more then 6