Stacie L has been in the antiques and collectibles business most of her life. She learned from her mom, an antique dealer.

It started with a book

The Harry Potter phenomenon all began with the first book, Harry Potter and the Philosopher's Stone by J.K. Rowling. The whole series became the most read books and watched movies of the past decade. The enormous popularity of preteens and teens all over the world is undeniable. Millions of kids have have grown up with the main characters on the silver screen. To date there are 8 movies about these main characters in this series. The fascination lies with these main characters; Harry Potter, Hermione Granger, Ron Weasley, and Ginny Weasley, Draco Malfoy, Professor McGonagall, and Professor Dombledorr.

Some of the minor characters, Luna Lovegood, Cho Chang, Professor Snape, Kreacher, Voldemort, Dobby, have a fan base as well.

The toys, dolls and action figures add to the series movie profits in the multi-million dollar range. Fans want to own a piece of their favorite character on the screen and in the books. They have far out sold the most popular doll of the last 50 years named Barbie, and her family of dolls.

The toys allow kids to use their imaginations and to identify with many aspects of the characters lives. Fantasy along science fiction, and with the trials and tribulations of growing up, resonate with young adults.

Movie collectibles collections are made for avid fans to collect and trade so depending on the budget, you may buy a memento from a these companies I have reviewed.

The Tonner Doll Company makes a full line of the Harry Potter dolls and accessories that are very well made with articulating limbs and beautifully detailed costumes. The figures are larger than most at 17-18 inches with hand painted faces.

The makes high quality dolls and figures for the doll collector that will last a lifetime. The individual dolls start at around $93.00 and up to $250.00 depending on the clothing and accessories.

These are considered an investment and probably would be best left in the box to retain its' value. Only avid collectors know and appreciate the cost and energy that goes into amassing a vast collection.

Most collectors buy two of each; one to play with and the other to sell at a later date.

Watch for sales for the upcoming holidays and shop early before they run out of stock. These items make a great gift for birthdays or for collectors of of all ages of these dolls. 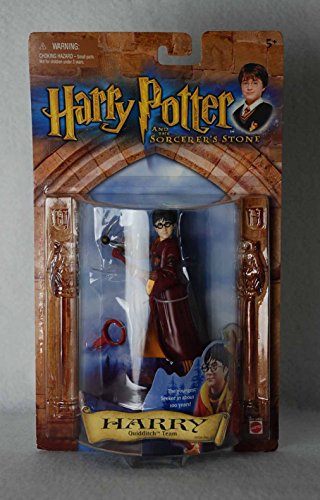 Mattel Inc. has been in business since the 1950 's with their Barbie line of dolls and is a well known and respected toy company.

They also has a line of Harry Potter character action figures, as they like to call them.

Boys are usually more apt to buy an action figure and not a doll. These measure around 12” for the teens and a little taller for the adult figures.

Most of the Mattel figures come in the colorful packaging that the special edition Barbie dolls come in.

There's an example on the page to the right.

These dolls are plastic with movable arms and legs and swivel head. Most collectors buy them new but try to get them second hand in original box for a better deal.

Ones without the packaging are usually half the normal price. Depending on how many were circulated will determine their price and future value. For the collector, maybe buy two and put one away.

NECA or National Entertainment Collectibles Association started in 1985 and distributes action figures and collectibles all over the world.

They are another toy association representing many toy companies that makes the Harry Potter character dolls.

The plastic action figures are small at 7” to 12” and comes with realistic faces and movable limbs. The clothing looks good and can be removed. Priced far below the other two and is affordable for a small budget.

The figures come in colorful plastic packaging as well for the collector. Start your collection at $15.00 up to $90.00 and up, depending on the figures and rarity.

The Harry Potter series , written by J.K. Rowling, may be the most popular series with both parents and children in history. The parents are glad their children are more interested in reading and may encourage better school grades as well. The children love it because its' characters are relateable to them with fantasy lives that all kids love.

Collecting the Harry Potter movie character action figures makes the characters come alive. Displaying them on a bookshelf provides good memories after watching their latest movie or reading the one of the books and discussing them with friends.

I'm in favor of any movie or book series that brings parent and children together and it promotes good family values. The stories teach good morals and give youngsters a reason to start reading and writing.

Which is your favorite Harry Potter character?