Stacie L has been in the antiques and collectibles business most of her life. She learned from her mom, an antique dealer.

Mr. Potato Head has been a staple toy for as long as I can remember. He was originally supposed to be made from a real potato that you used to attach the arms, legs,nose, eyes, mouth and hats.

There was also a Mrs. Potato Head so the same techniques applied. The large brown baking potato was the best type to use. Those little red potatoes may be better for the kids.

As time went on, the Hasbro Company made other characters such as the potato dog and other animals. The Spud head is so famous that he was inducted into the National Toy Hall of Fame in 2000.

Lesser know friends and family were Pete the Pepper Head, Katie the Carrot Head, Oscar the Orange Head, and Cookie the Cucumber Head. They didn't make the cut but are highly collectible and rare.

The company also came out with a plastic potato so you wouldn't have to waste a real one and avoid upsetting mom.

Simple toys are the best

Some may look at this toy as being as lame as the broom handle baseball bat or the painting a large rock and making it your Pet Rock.

There are few toys that are still used today that don't require technology. They are simple, effective and inspire some imagination.

This toy was first introduced around 1950 by an inventor, George Lerner. He played around with the concept for a few years but it didn't catch on until a cereal company bought it. Later the company that bought it became Hasbro,Inc and the toy know as Mr. Potato Head was officially introduced on April 30,1952. The children had 30 head features to make funny faces on fruits and vegetables. Then sales took off.

I remember playing with fruits such as apples, oranges and bananas to make crazy characters.

Tomatoes were too soggy and cucumbers were too long and not as funny looking as the banana. In the Autumn, we would have some small pumpkins and squash to use to make funny faces. 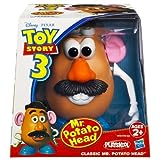 He became popular again in 1995 when Toy Story was released. The newly developed 3-d animation film (cartoon) was a success for Disney-Pixar as well as for many forgotten beloved toys from childhood. Old favorites such as pull-string cowboy and cowgirl dolls, astronaut action figures, dinosaur figures, slinky-dogs and plain slinkys.

Thanks to a Disney-Pixar movie named “Toy Story”, Mr. Potato Head and his wife have had a revival of sorts. The old favorite toys are highly sort after.

The newer, updated versions of Mr “P.” have him dressing in numerous costumes such as a cowboy, astronaut, Darth Vader, R2D2 robot, football player, Elvis and Star Trek characters, among others.

This new trend of updating old classic toys will entice the younger generation to discover the simple fun of creating a spud personality!

Both the new Mr. and Mrs. Potato Heads are also thinner, to go with the new health conscientious lifestyle. I guess the manufacturers want to keep up with the times.

I found the PLAYSKOOL toy site recently and see that they are now offering different versions of Mr Potato Head.

The Mixable Mashable heroes such as the Hulk, Wolverine, Spiderman, Ironman, Captain America.

The Little Taters are a smaller version of these heroes made especially for preschoolers.

Did you ever play with Mr Potato Head?

Mr. Potato Head was invented in simpler times,when kids liked to make things with their hands. Those born in the 1950 's remembered playing with these toys and now are they are labeled the “Boomer Generation” or “Bloomers.”

This generation is responsible for reviving many toy collections today.Boomers had made the toys popular once more and now has many collectors clamoring to add to their collections.

Like so many others, I like to collect older toys that remind me of happier, simpler times. Happy collecting.