My son is four years old and has been a fan of Thomas the Tank Engine for two years running now. In his otherwise flickering attention span, this is one major fixation. I would almost call it an obsession. He has seen the CDs so many times that he knows all the characters, stories and dialogues by heart.

Essentially the boys like toy trains and with Thomas they get so much more. There are stories which teach values, there are characters which you might meet in the school or street, there are even those inner desires to live on an island like Sodor where so many exciting things seem to happen all the time.

Everything contributes to the success of Thomas. The parents know that Thomas Cartoons will never be violent and have a disturbing influence on the kids. The kids love the characters and the stories as each story has a new adventure to look forward to. Then of course there are all the stories that they can make up using these characters on their own.

Half the time my son sits with his engines and tracks and makes up stories about what may happen to each character. His imagination borrows dialogues from the cartoon series and adds situations of its own. I love to hear him narrate his own version of the adventures of Thomas the Tank Engine.

If you have a boy, chances are he already is a big Thomas the Tank Engine fan. However its not just the boys who love the little blue engine, I actually have to buy a spare engine for my son's father to play with. He loves Thomas just as much as his son.

While there are enough Toys to keep the boys busy, the lovable old character now has a new digital avatar too. Thomas The Tank Engine has his own site. In fact there are a whole bunch of country specific sites which allow the children from around the world to interact with Thomas in their own language.

Given to the right is the link to the Thomas site for USA. However there is a different site for the people in the UK. So if you live in England you may want to check out the other site as well. Essentially the games and activities stay the same, but the offers that you have in the online shop may differ. So take a look. I'm sure your boys will love the site as much as mine does.

Cant Believe How Time Has Flown

Its been two years since I wrote this hub and I cant believe how fast the time has flown. Well my little collector of Thomas the Tank Engine toys has got more than thirty different engines and about five stations.

He has picked up two sets of bedsheets with matching pillow covers and his towel with Thomas the Tank engine and his best friend Percy is as popular today as it was a year ago when he was gifted the towel.

He has outgrown two Thomas the Tank Engine t-shirts and is currently on his third one. So for all you parents out there wondering if its worth buying all these toys, believe me it is. The craze just never goes away, even after the craze for Ben 10 starts. Thomas is still Number One!

Thomas in the Bedroom 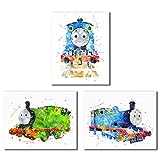 Quick Update : My son is now ten years old and surprise! He still can't let go of his Thomas the Tank engine toys. I honestly never thought it would last quite this long!