Great Board Game-Times To Remember

Have you ever owned a board game that everyone you introduced it to absolutely loved it?

It's called "Times to Remember". The tagline is "The Game That's a Blast From Your Past". It was manufactured by Milton Bradley. I found the game on a clearance rack at K-Mart back in the early 90s. I own two copies of the game and I've taken it to every family function and party ever since.

At least a dozen of the people I've introduced it to have tracked it down and purchased it and take it everywhere they go. Countless others have purchased it as a result of playing it with them.

This is the Game You MUST have! 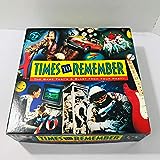 How To Play the Game

The game can be played with 2 or more people. You'll find that it is not necessary to have an equal number of players on a team or that all players have to remain for the duration of the game. For this reason, it's a great game for family reunions or parties where people want to be free to do other things.

It's a trivia game where you are guessing the year that something took place. It is only necessary to know the year, not the actual month and date. The questions are divided into five categories spanning events that occurred from 1950-1990+. The categories are:

Each team takes turns rolling the dice to determine the category both teams will be required to answer a question about. Once the question is read out loud by a volunteer from either team or a non-player, both teams have a chance to quietly discuss amongst themselves if anyone in the group is confident they know what year the event took place.

Each team is given a round playboard that has all of the years from 1950-1990+ on it and 7 markers. There is one marker that is for marking just one year. There is a marker to mark two years, one for three, etc. The object of the game is to be able to use each marker. You do this by correctly identifying the exact year on one question, within two years on another question, within 3 years on another, etc. If someone is confident of the exact year something took place you would want to use the marker for one year and place it on that year. If you are uncertain, but knew it was either one year or another, you would want to use the one that allows two years. If you have no clue, you'd want to use the largest one you have (7 at the beginning of the game) so that hopefully, you can guess it within seven years of it happening.

After both teams are happy with their choices, then someone reads the answer. If the correct year was within the range chosen on the marker, then you discard the marker and that range is no longer available to use for that round. For instance, if you just guessed something and used the 7-year marker then for the remainder of this round you could only use 6 and below. You can use them in any order. Just remember though, at some point there is one question that you will have to know the exact year in order to win. The first team to use all seven markers wins.

Sample Questions from the Headlines Category

Sample Questions from the Hollywood Category

Sample Questions from the Television Category

Sample Questions from the Music Category

Sample Questions from the This & That Category

My Personal Experience With the Game

Everyone loves this game. Everyone walks away from this game remembering something about their past that makes them smile and they always learn something.

As many times as I've played this game I don't remember all of the answers from previous times, so it never gets boring.

I like the aspect that people can come and go and no one minds. It often ends up being two of my cousin's husbands against six or seven people because they like the challenge. Sometimes it's 10 people against 5. No one cares because there is no great advantage to having more people. Often it creates more confusion since no one can agree on a date.

It's always fun when you have that one person in your group that they are insistent that they KNOW it was 19-whatever when something happened because they were there, etc. Only to find out they were off by 10 years!

There are lots of places to still find this game even though they no longer make it. No one I have recommended it to has had trouble finding it online. I have provided a link above for one source.

Buy it, take it to your next party or get-together. You'll see how fun it is!