Board Games are More Popular Than Ever Before

I've heard comments before about how board games are dying or that they've lost popularity. The truth is that they are more popular than ever before! I think this is partially because we all go to work, spend time on our computers, and spend time on our phones each day. By the weekend it's nice to actually get people together to socialize and of course, connive and strategize against each other.

I am partial to games that involve critical thinking as a way of "winning" the game. I do appreciate a little luck in the game, but games that involve too much luck are, in my opinion, better suited for your kids and family get together with your Uncle Bob.

If you aren't looking for a strategy game, then I suggest you view my list of the best board games for kids.

In making this list I decided I would use, in order of weight, customer reviews, my own opinion, and overall replay value. Since I have played each of these games, I thought I would give some weight to what I've actually experienced, but not as much as what I gave to other customers and writers who have reviewed similar products. This should help to eliminate any bias that might be presented by my own personal experience.

10 Good Board Games for Family Night

How To Play Ticket to Ride Europe

My choice for best family strategy game is Ticket to Ride. While it does require critical thinking after a few plays my 8 year old niece had the basic overall premise of the game down, get more points than everyone, block off who you can, and pick routes that are close and you can win!

Ticket to ride is the most award winning game since it's release. It won the Spiel des Jahres in 2004, the Diana Jones award in 2005, and the Origins award for Best Board Game of 2004. Between 2004 and 2008 750,000 copies of ticket to ride were sold. Additional versions of the game like ticket to ride Europe and ticket to Ride Marklin have been released that add to the many ways that you can win this amazing game.

The Downfall of some strategy games is the length of time that they take to finish. Ticket to ride can easily be completed in 45 minutes. This is because there are only three moves you can make; draw a destination ticket, draw a train-car card, and building a train route. The short length of time allows you to play multiple games and use multiple strategies in a night, thus you can have multiple winners. Strategy games that take upwards of 3 hours can often leave you bored, and disappointed after you draw a stroke of bad luck and realize you have to sit there for 2 more hours with no chance to defeat your best friends/enemies (frienemies).

Many Ways to Win

I love how in ticket to ride there are so many different ways to win. Whether it's going for high value routes and building the longest continuous route, or whether your sole purpose in the game is to build short routes on high point value strings and disrupt everyone else there are so many ways to win, this game almost never gets old. (When it does I recommend putting it away for a couple months and then getting it back out)

Who is the winner?

This is the best part of the whole game. Suspense builds throughout the game as you try to figure out who is winning and who you need to stop. You'll never know until the last point is counted.

Can't Get Enough of Ticket to Ride?

Try the more complex Ticket to Ride Europe. You can see this in depth youtube video on the right to learn more about it. Includes an update to use "stations" to get through areas that you had been blocked off in before. Also, players start out with just "one" long route, this eliminates some of the luck involved with the original Ticket to Ride.

Want to practice? Once you have purchased the game, you can start and play Ticket to Ride online at the Days of Wonder website. 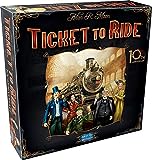 Best Strategy Board Game for Adults and Kids:

Settlers of Catan is an amazing strategy game that is for 2-4 players with the initial board game and expands to up to 6 players.

The Best Part of Settlers of Catan

The game has to be handled and played differently every time. Whether you are trying to win purely off of purchasing cards or going for board domination, you'll never see the same board twice.

The Worst Part of Settlers of Catan

The length of this game can be pretty daunting for someone new in this game. If you are new at it, then I have seen this game go up to an hour and a half or two. Once everyone knows what they are doing it goes very quickly and you can usually finish in well under an hour (sometimes as little as 30 minutes).

Cities and Knights of Catan

This expansion offered all new insight and strategy into the game including commodities and points for getting the Arches off of certain commodities that you receive. If the dice is rolled a certain way you also receive powerful cards to use for yourself or against opponents. The greatest part about Cities and Knights of Catan is that it really makes for an entirely new game. The strategies used in it are completely different than those used in the original game. In my mind, they are both equally good and worthy of being placed in this list.

Here is another great family strategy game from Rio Grande Games. This game is for age 8+ and for 2 to 5 players.

Develop the area by laying tiles around Carcassone and deploy followers on roads, cities or fields. This game takes about 30-60 minutes to play.

How to Play Carcassone

I've included a thorough instructional video on what you can expect from Carcassone and how to play it. In some ways this game is similar to Settlers of Catan and in others completely different. I find that I can finish a game of Carcassone just as fast or faster than Settlers of Catan depending on who I am playing with..

Here's a customer's review on amazon: "The game consists of laying tiles to build cities, roads and monasteries in the South of France. Points are gained by creating long roads, building large cities or farming multiple farms. It draws elements of building jigsaw puzzles together with a strategy game of competing for territory. I have played this game with family members who aren't really into board games and they enjoyed it just as much as gamers."

How To Play Dominion

Here's another incredible new strategy game by the same developers as the award winning game Carcassone. Rio Grande Games has outdone themselves in this game by making it unique yet easily understood by adults and kids. Despite its simplicity it does not lack critcal thinking or strategy.

Essentially you are a monarch and you want to expand your kingdom through the "Dominion" of others. By bringing civilization to them you can unite them under one banner. There's just one other problem, everyone else that's playing wants to do the same exact thing!

With the various decks of cards you can play in this game and the expansions that have been released, this amazing game will never play out the same way.

With experienced gamers this game can be quickly completed in around 30 minutes.

Although this game was released in 2008 it continues to be discovered and receive awards from the gaming community today. Because most people have still not caught on to this amazing game I put it in the "new strategy board game" category.

Because I'm running out of space on this hub, I recommend you look into the other great featured games I've listed above. These are the top rated and bestselling strategy games out there. If you click on them, then you can see additional information and customer reviews on each.

Other Hubs I've Written on Board Games:

Best Board Games for Kids