As a Barbie Dolls Collector and a huge Twilight fan, if I want to buy a doll my first preference should be the Twilight Saga Barbie Dolls but I have to say that I like the Robert Tonner Twilight Dolls more. What is special about these dolls, you may ask. The Twilight Tonner Dolls are created in the likeness of the Twilight movie cast which makes them a much preferred choice of the Twilight fans. Also characters like Jasper Hale, James and Laurant which are not available in the Barbie Doll collection are available from Tonner Doll Company. Presently, the Tonner Doll Company has life like dolls based on some of the major characters in the Twilight Novel and Movie like Edward Cullen, Bella Swan, Jacob Black, Victoria, James, Laurent, Jasper Hale, Jane and Alice Cullen. The clothing and appearance of these dolls are taken right out of a scene from the film and you can even put them in different poses. The CEO and Head Designer of the Company, Robert Tanner, is a huge fan of Stephenie Meyer's Novels and plans to release all major characters from the film.

The best place to buy these dolls is from the Tonner Doll Company's Online Store on Amazon. Why Buy Online? These Dolls are available at much cheaper prices in their Online Store than purchasing from elsewhere.

Edward Cullen is the main Protagonist of Stephanie Meyer’s Vampire Romance Novel Twilight and the movie based on it. He is a Vampire and love interest of Bella who is a human. In the Film, the character of Edward is portrayed by Robert Pattinson which has earned him a lot of name and fame. The Twilight Edward Cullen Tonner Doll is a unique lifelike doll is sculpted from fine-quality vinyl and hard plastic, with rooted saran hair and hand-painted facial features in the likeness of the Twilight film’s character of Edward Cullen played by Robert Pattinson. This Doll is approximately 17” tall and includes 14 points of articulation (including neck, shoulders, elbows, wrists, chest, hips, knees and ankles). The Doll is dressed same as in the Movie with white buttoned shirt and black pants, dress socks, loafers, tie and tailored black coat. He also comes with a wristband with a metallic pendant.

Bella Swan (Isabella Swan) is the female Protagonist of Stephanie Meyer’s Novel Twilight and the movie based on it. In the Movie Twilight, the character of Bella is played by Kristen Stewart. Bella is the love interest of Edward who is a Vampire. The Twilight Bella Swan Tonner Doll is based on the character of Isabella Swan portrayed by Kristen Stewart. This doll is sculpted from fine-quality vinyl and hard plastic, with rooted saran hair and hand-painted facial features and Sculpted in the likeness of the pretty actress and is approximately 15” tall and includes 15 points of articulation (including neck, shoulders, elbows, wrists, bust line, waist, hips, knees and ankles). The Bella doll wears a gorgeous blue dress, a white sweater embroidered with blue, pink, and green accents, black leggings, a white sock and sneaker with working laces on her left foot, and a black leg cast on the right. With snap buttons, the clothing on this doll can be easily removed for cleaning. While the Bella Doll is too finely crafted to be handled like a toy, she's made with a flexible design that allows you to place her in the perfect pose.

Jacob Black (Jake) is an old childhood friend of Bella who competes with Edward for Bella’s love in Stephenie Meyer’s Paranormal Romance Novel Twilight and the film based on it. The character of Jacob Black was played by Taylor Lautner in the movie which earned him a lot of name and fame. The Jacob doll is the first figure in Tonner's Twilight Saga line to come from the New Moon sequel. This doll stands 17 inches tall and is fully articulated. This doll is a limited edition of only 3,000 pieces. 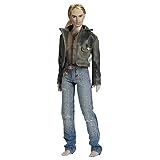 James is the merciless and devilishly handsome predator on the hunt for Bella of Stephanie Meyer’s Twilight and the movie based on it. He is the major antagonist of Twilight. He is the mate of Victoria and the leader of a group of nomadic vampires. James is destroyed by Cullen brothers Emmett and Jasper after he almost kills Bella. The character of James is portrayed by Cam Gigandet in the Twilight Movie. The James Tonner Doll is made in the likeness of this actor. The doll spots distressed denim jeans paired with a weathered faux leather jacket. His costume also includes a resin police badge, aviator wings, various necklace and charms linked to his jeans, faux leather bracelet with chain trim, faux leather cuff with buckle, two beaded bracelets and chain necklace. The James Tonner Doll comes with a display stand and is part of a limited edition doll collection.

Laurent is the most civilized member of James Coven in Stephanie Meyer’s Twilight and the movie based on it. He is the voice of Twilight's nomadic group of vampires determined to locate Bella Swan and kill her. The role of Laurent is portrayed by Edi Gathegi in Twilight Movie. Twilight Laurent Tonner Doll is seen in rich corduroy pants paired with a textured faux leather belt and boxers. He is accented with a luxuriant brocade vest with silver chain and a soft faux leather jacket. This doll is a limited edition and comes with a display stand. 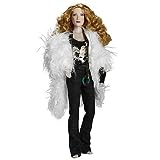 The fabulous Victoria Tonner Doll is based on the character of Victoria of Twilight Saga; the fiery antagonist is on the prowl to get Bella. Victoria is a member of a group of nomadic vampires looking for revenge for the death of James by the Cullens. However, she fails in her attempts as Bella is protected by the wolves. Later in Eclipse Victoria creates an army of bloodthirsty newborn vampires in Seattle to rise up against the combined forces of the werewolves and Cullen family. But she and her partner Riley are destroyed by Edward Cullen and a young wolf Seth Clearwater. The role of Victoria is portrayed by Rachelle Lefevre in Twilight and The Twilight Saga: New Moon. But this actress is replaced by Bryce Dallas Howard in The Twilight Saga: Eclipse. The Victoria Tonner Doll is seen wearing a printed jersey tank top, black denim jeans and plush faux fur jacket. She also wears a gold chain necklace, peacock feather charm, a knit armband under a faux leather bracer, beaded bracelet and faux leather bracelet with bead accents. This doll comes with a convertible basic body with flat feet (high-heel feet also included).This limited edition doll is made in the likeness of Twilight movie character of Victoria played by Rachelle Lefevre and comes with a display stand. 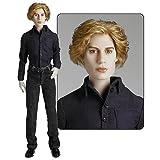 Jasper Hale is the love of Alice Cullen. He is the adopted son of Carlisle and Esme Cullen. The role of Jasper is portrayed by Jackson Rathbone in the Twilight Movie. This highly-detailed Jasper Hale Tonner Doll comes dressed in a deep blue dress shirt with dark wash jeans and faux leather belt. Molded shoes and Cullen bracelet also included. This doll features an exquisite likeness of actor Jackson Rathbone and stands approximately 17-inches tall. This is a limited edition and only 1000 pieces would be available worldwide.

Alice Cullen is the adopted daughter of Carlisle and Esme Cullen. She is the wife of Jasper Hale and has a special ability of seeing the future. She is seen helping Bella when she is in danger in the Twilight Novel and Movie. The role of Alice Cullen is played by actress Ashley Greene. This doll is 15 inches tall and features a remarkable likeness of the actress Ashley Greene. The Alice Cullen Tonner Doll is seen wearing an authentic costume reproduction from The Twilight Saga: New Moon that includes a striped blouse with bow-tie collar, slim-cut twill pants, plush corduroy vest, knit socks, and faux-leather ballet flats. Alice's Cullen family crest necklace is also included, along with a display stand. This is a limited edition doll of 2,000 pieces.

Want to know how the Twilight Tonner Dolls look?