"I've been very very good this year, and I want Spike the UltraDinosaur!"

There's a recession going on, but the folks at Fisher Price apparently didn't get the memo. At prices between $130-150.00 U.S. Dollars, the designers of the Fisher Price ImagiNext line of toys has pulled out all the stops on this remote-controlled robotic dinosaur geared to the 3 to 10-year old age range. And in spite of the big price tag, I suspect Spike is going to be in more than a few elite homes this holiday season.

Spike has all the techie appeal of a remote control car with the imaginative interest of Fisher Price's posable ImagiNext dinosaur line, and the approachable friendliness of FP's Little People toys.

In a Wii generation, toy makers are making toys with more and more complicated functionality each year. To take a metaphor from Pixar's Toy Story, Spike is to Buzz Lightyear what Buzz was to Woody. But despite all that Spike can do, he is incredibly easy to operate. The remote control features large, buttons on a remote that resembles a game controller. The remote's buttons all use pictures that show the dinosaur's functionality, so if you aren't a native English speaker, or if you're a pre-reading tot, no problem. This toy is designed to be used by a very young audience.

Spike's gee whiz factor is through the roof. This robotic toy not only walks, but it lifts up on all fours and roars, according to its web site, "like Tarzan." Yeah, right, I thought. I've got to see this. And as I imagined Tarzan's cry from the classic 1934 movie, I was SURE that some young toy designer thought Tarzan was just a great name to put on whatever the marketing ploy was for good ol' Spike. But then, to my amazement, I actually heard Spike's Tarzan cry. WOWW!

Spike the Dinosaur has presence. Spike is over 27 inches, and on his hind legs, this dinosaur toy may actually be taller than some of the children who will receive it this holiday season. Unlike other robot offerings of recent years, Spike the dinosaur looks more like a toy, and less like a robot, and is built like a toy, too. Spike's designers have gone more for a fantasy-look than dinosaur realism. The appearance of this robot is something between the ImagiNext Dragon and the creatures on the Land Before Time movie series.

Of the several people who bought this toy, most of the parents and older siblings couldn't wait for their kids to stop playing so they could have a turn.

For all of its functionality, I think Spike's price point is going to cause Fisher Price some trouble until the recession ends. If you can't wait to buy Spike, but his price doesn't fit your Christmas budget, look at the other toys in the ImagiNext Dinosaur line. Many of them are priced at a mid-point price range for Christmas buyers.

Spike's price point is competitive for robotic toys, however. If it is a robotic toy for a young child you are looking for, Spike is your dinosaur. 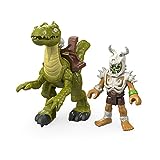