Used, Unused or CTO stamps? That is the Question.

There are a few avenues of thought on what is more valuable for collecting stamps from an investment standpoint. The general rule of thumb is that unused stamps will give the greatest return for your money, but that is only if they are in demand. Less people will tend to purchase higher value stamps, like the $5.00 values in the regular issue series, Federal duck stamps, Express Mail stamps, most especially if you like to collect plate number blocks of four. This will also cost you quite a bit of money, as well, but it all depends on what your aim is. These are the stamps that will sell for the greatest amount of money.

I say that unused stamps will give you the greatest returns, however, there are times when this is just the opposite. If you collect a country or countries that have a high rate of illiteracy, used stamps will be much more valuable than unused ones. In this instance, very few people will be using stamps and writing letters, since not many people in this country are able to read or write. It stands to reason that it will be rare that these stamps will go through the mail stream. There are several West African countries that fall under this category, along with a few others in the world, like Niger, Burkina Faso, Afghanistan, Sierra Leone, The Gambia, Guinea-Bissau, Senegal, Benin, Ethiopia, and Mauritania.

CTO's or cancelled to order stamps

Another type of stamp on the market are CTO’s, or stamps that are cancelled to order. These are neither used nor unused stamps, but something in between. They are cancelled en masse with a dated cancellation, and are sold by the sheet at a discounted price, just to move them and generate a little money for the country that issued them. It isn’t hard to learn how to tell which stamps are CTO, as they still have gum on the back and are sold in full sheets. They just happen to have a cancellation.

So why purchase them? Most people don’t. The CTO’s happen to come separated in mixes, or are sold to dealers that sell them to their customers, also at discounted prices. Some new collectors want to amass stamps in a collection, and this can be the quickest and easiest way to get a number of stamps at a very reasonable price. Since these stamps are neither new nor used, they will cost less than used stamps. 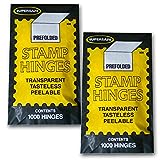 There are also many unused stamps that are used as a marketing ploy by some of the poorer countries to generate revenue. These stamps are printed in very high numbers, sold primarily to collectors. An example of these stamps are the Disney stamps. They are very popular among topical collectors that specifically collect Disney related stamps. They give the collectors of this topic many stamps to place in their collections, and the countries that have them printed get extra revenue for their governments. It is basically a win-win situation for all concerned. The only ones that cost more, of course, are the higher valued stamps in the set

Back in the early 70’s or thereabouts,Tonga was one of those countries that used to print very unusual stamps that were very popular with collectors. I remember some that were bananas, and some that were round and resembled coins. These interested a number of collectors, myself included, as they were so different.

What the Stamp Market Holds...

These are more stamps that give people options on what they can collect, and what they may be able to afford, or put away for decades to get prices on later. Just keep in mind, that unless one actually collects rarities or errors, that the stamp market just might not be as lucrative as one hopes. It is always a gamble when it comes to investment purposes. Stamps are also something that need to be in a controlled environment, especially if they are the older unused stamps with gum on the back. Keep in mind that humidity causes them to stick together, and that could ruin your investment when it comes to unused stamps.