What are the Best Racing Games for PC, Xbox 360 and PS3

Wow, there are a LOT of racing games from the previous console generation.

What do I mean by racing game? I choose to include "arcade" style games as well as "simulation" racers as well to give the best informed views.

It was kind of hard to know where to begin, but as with all of my reviews and views, they are all based on my personal playtime with the game in question.

Amongst the games I will take a look at are some obvious heavy hitters, like Gran Turismo 5 and 6, Forza Motorsport 2, 3 4 and Forza Horizon. On the PC we can take in greats like Grid 1 and 2 and even Assetto Corsa!

This one is an early access game available on Steam.

With that in mind there is not a huge amount of content available here yet, but what is here is amazing!

The first thing to mention is the sound. I have NEVER heard such good engine sound effects in a racing game ever! They are simply incredible. The graphics are astonishing and the physics seem absolutely spot on for simulation fans.

This simulator is also being built with modding in mind, which I believe is a bit of a first. Tracks are even laser scanned to ensure total accuracey.

This is a contender and no mistake. Pick it up now and help the developers create the ultimate racing simulator.

No score as yet as unfinished!

One of my all time favourites, this game has it all! Great sound effects, silky smooth graphics and good frame rates and the racing is close in and FUN!

Take a look at the picture above, the damage modelling is simply incredible in this game. To loose a wheel in a race in brilliant and there are not so many games modelling damage to this degree.

Another great addition is the new camera view that tracks the corners and moves your view to anticipate it, just like if you were really driving and you look to the corner before you start to turn. If you crash in this view things get violently shaky and blurry, and colour starts to drain out from the screen at high speeds. This sounds intrusive but it's quite spectacular and subtle!

Huge range of cars and lots of tracks, this is a brilliant racer! 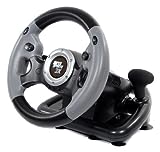 DiRT 2 was in my humble opinion a pure and simple arcade racer wrapped up in presentation that either annoyed the hell out of you (as in my case) or inspired you with it's extreme sports show style and constant praise! The "World Tour" mode sees you taking on both time trials and races against opponents in a variety of locations and race styles.

DiRT 3 dropped the Colin McRae from it's title for the first time in the series and seemed to me a better racing experience. It just felt less arcade and the presentation was toned down a bit, which made it more palatable to me. Nice game, good feel and brilliant graphics!

Unless you are on a budget I would recommend going straight to F1 2013 just for the Classic Mode. You get to race cars from the 80's and 90's on classic tracks jostling for position with classic opponents. This is DLC unless you bought the complete edition but it really is worth it.

What more can we say, F1 is graphically superb, the sounds effects are spot on, FPS remain high and stable throughout and the simulation aspect is fantastic! This is a real gem and a firm 9/10

Starting at number 2 as I never had the Xbox original, Forza has a really special place in my collection. I still own and play all of them. Think of it as Gran Turismo with 100% improved sound effects, damage modelling and almost as many cars. Purists may say that the handling is slightly more arcade than Sim but I don't agree. It feels right to me!

Expensive DLC aside, these are fantastic and the 4th instalment worthy of 10/10.

Now this one I love to bits! Open world racing, masses of cars to choose from, sublime graphics and an awesome soundtrack. There is so much content here, especially with the free add on 1000 Club Expansion pack, and the paid for car packs and rally pack.

Single player, multilayer, it's all here in abundance. The racing is road rather than track based, but with Forza's pedigree behind it, it feels and handles great.

Also, if you register with the Forza website, and own any of the previous games, you get points, which lead to rewards such as in game cash.

Sony have removed ALL DLC for GT5 from the PS Network... Well Done Brains! I also believe that all on-line aspect have been closed down, so it's single player only from here in in.

So for that reason alone, many will have abandoned GT5 for 6 now. What's new in the latest version?

Weather is implemented, as is a day / night cycle. Even the stars are accurately modelled! Add to this new physics for tyres and suspension and you may well have the ultimate car simulator currently available.

It's also worth noting all of the GT6 Vs Forza 5 comparison videos on Youtube, it is NOT as clear cut between console generations as you might think!

Pure and simple arcade racing set in Ibiza, a Spanish island. Great graphics but no real physics to speak of. It's fun, and it's ok are about the best things I can think to say.

The DLC is pricey, the PC on-line is plagued by hackers and cheaters, and it is extremely lightweight in simulation terms. That said, there is a lot to do and explore, so it's not all bad.

This one is a distraction, nothing more. You can race cars, S.U.V.s and about 3 motorcycles, well down from the previous game. There is asphalt and dirt, and it's another open world game, but with Forza Horizon doing everything so much better, I can't see a reason to recommend this unless you can bag it for a bargain price on Steam.

The first was called Race Driver:Grid and was a brilliant, albeit touch as old boots racing game. Released in 2008 it went on to win awards and critical acclaim from both professional reviewers and the public.

Take everything good about Race Driver:Grid and do the opposite, then you have Grid 2.

OK, that's not entirely fair but the game has had a lot of criticism. Perhaps not from journalists, but certainly from the community who accused the developers of abandoning everything that made the first game great. Like cockpit views which are completely absent. The handling straddles the line between arcade and sim.

Released just last year, this game is already being replaced by Codemasters, the one time king of racers.

Microsoft have REMOVED all the DLC that was previously available for this game... Well Done Brains part 2!

Its got a huge range of MOTORCYCLES!!

That's me sold, cars and bikes on the same track is racing nirvana, albeit in a terribly arcade fashion. That being said, it still holds up as one of the most beautiful Xbox 360 games ever made, despite being such an early title.

OK, its arcade, but there IS A METRIC TONNE of content here, track races, street races, special challenges, the whole full Monty! And for an arcade game, the cockpit views (for every car I might add) are superb.

PGR4 contains approximately 140 vehicles to race with, which is brilliant!

Warning, this should not be your first racing sim / game! It is seriously hard!

Motorcycle racing simulators tend to be harder in my opinion anyway, but this one takes it to a new level. That said, it just takes time and practise to master it. Not only do you have left and right and throttle, but front brakes, back brakes, and rider lean angles front to rear, and left to right! Get it wrong and kerplow!

Too much throttle on the apex of a corner and you will high-side the bike, hit other riders and you are off. It is brutal racing, but the sense of accomplishment is there to earn.

Graphics are beautifully done, with smooth frame rates. The game itself is nicely presented and includes a great career mode as well as the usual single / multi-player stuff.

This game contains all the tracks, riders and teams from the 2013 season of MotoGP, Moto 2 and Moto 3 world championships.

By the creators of MotoGP 13, this is very similar in style and substance. It is also perhaps even more brutally difficult, which is quite an accomplishment!

Pretty much everything above is the same for this game, but it's motocross this time. One big change is track degradation. Ruts form and corners become a real gamble of finding the right line, especially with so many bikes on track at the same time.

There are a TON of great racing games available on Xbox 360, PS3 and PC. This is just the tip of the iceberg and I know I have missed many greats like Race 07 out.

Exclusively on-line racers have also been excluded, as I don't play them and therefore could not give an informed view.

But whatever your tastes and skill level, there is something here for you!

Comments are king! Let's have a chat and see what other racers are driving right now!