Where to Find Cowrie Shells

I have an obsession with collecting cowrie shells. Not every beach has them, you need to know where to find them.

Frequently, when beach metal detecting, the detector gets put to one side while I indulge my desire to pick up every single cowrie shell in sight.

In the UK, the cowrie, or cowry as it is sometimes spelt, is a small pink or white shell with a rounded back and a slit opening underneath.

More well-known are the larger tiger cowries that are native to the Indo-Pacific regions of the world's oceans. These beautiful shells can reach 6" in length, and are popular as ornaments.

Tiger cowries, from the family Cypraeidae, are typically mottled brown in colour, and have a natural, smooth and glossy shine. You'd be forgiven for thinking the shell you bought in a tourist shop had been polished in some way, but the clear, porcelain look and feel of those magnificent shells is entirely natural.

British and European cowries are much smaller than their warm-water counterparts.

With a maximum length of just half an inch, it takes a keen eye to spot them among the small stones and shell mix on the shingle, brought in by an incoming tide.

From the genus Trivia, two types of cowrie shells are to be found in the UK and Ireland, T. monacha and T. arctica.

Here I am going to give you some tips on where to find cowrie shells.

Cowrie shells I have found 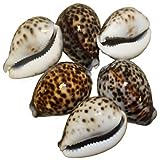 Cowries can be found in all US coastal waters, but are most commonly found in Hawaii.

There, the biggest tiger cowries in the world can be found.

It comes out at night to feed off sea vegetation,and to occasionally eat other sea snails.

If you want to find tiger cowrie shells, you will not see them easily, because they are covered with a tissue known as a mantel.

This mantle helps hide the cowry from predators as it camouflages their wonderful glossy shells so that they blend in with their marine background and are hard to spot.

By the time a shell washes up on the seashore, the creature that inhabited it has long since died a natural death.

Such is the world demand for these shells, to be sold as ornaments, whole trades have grown up around the active hunting and fishing for them while they are still alive.

While there are several hundred different types of cowrie shells to the found world-wide, there are only two types to be found in Britain and Ireland.

They have a similar shape to tiger cowries, but are much smaller. They also do not have the shine and smoothness of the bigger cowrie shells.

Instead, they have delicate lines that go across the body of the shell.

A cowrie shell on the sand

Where are they to be found?

Cowries are to be found in seaside pockets all the way down the Western side of the UK and Ireland. They are seldom seen on Eastern coastlines.

I have also found cowrie shells in the Mediterranean Spanish coastal areas, and in the northwest of France.

Worldwide, they can be found off the coasts of China, India, Africa, Australia, the USA, Canada, the Pacific Islands, Eastern Europe, the Mediterranean Sea and the Indian Ocean.

Despite being so geographically widespread, it comes as no surprise to learn that several cultures hold the cowrie in high esteem.

It was one of the earliest forms of money, collections of them being acceptable payment for good and services among earlier explorers and traders.

Monetaria moneta is the Latin name for the money cowry.

Accepted as a currency right up until as recently as the late 19th century, money cowries were offered in exchange for goods and services the world over.

Widely found in warm Indo-Pacific waters, they are small, white or yellowish with a gold-coloured ring around their backs.

In a way, they made excellent coins.

They had more or less a standard size and weight, were easily recognisable, durable and easy to handle.

While exchanged by the basketful, they did not need to be individually counted, and were instead weighed.

Cowries throughout the ages have often been used as adornments like necklaces, bangles, earrings and other jewelry.

In Europe, skeletons from the Stone Age period have been dug up with their cowrie necklaces still intact.

Even today, cowrie shell jewelry has its own rustic charm and are sold as necklaces, bracelets and earrings.

Small shingle on the shore

What to look for when searching for cowries

In my experience, and I have been collecting cowrie shells for nigh on 50 years, the ideal conditions in which to find those wonderful little seashells are on a small pebble or sandy beach that has small shells on the tide-line.

On beaches with a lot of big shells or large stones, cowries are often absent.

This is because the large stones or shells will have crushed the cowries to nothing if they all came in on the same tides.

The wave action would have destroyed all small shells, leaving only larger and heavier debris.

Shorelines that have steep drop-offs into deep water are unsuitable candidates, as are beaches which are covered in large-leafed seaweed, although they are possibly underneath.

The beach in the photos here are perfect for searching for cowrie shells, and I know from many years' experience that this particular shore-line is especially rich in those wonderful pink or white gems.

Knowing where to find cowrie shells and on what type of beaches they can be found is half the battle.

Close-up of a cowrie shell on the beach

A fascination for cowries

They say that having a fascination with collecting cowrie shells runs in families, but I seem to be a first in our line.

I don't know what it is about cowrie shells, but put me on a beach where cowrie shells are, and you won't see me for hours.

I have jars and containers full of shells that I have no idea what to do with! They were never collected with a purpose in mind, but still I have this compulsion to collect them.

I thought I was alone until I found some other sites where other people have professed a love for collecting cowrie that borders on the maniacal.

If you would like to know more about where to find cowrie shells, just keep your eyes peeled to the ground when walking along the seaside.

You never know your luck.

Do you collect cowries?