Why collect banknotes as a hobby?

Traveled quite a bit and don't know what to do with remaining foreign currency notes? Why not start a collection? You don't even have to buy a fancy collector's album for a beginner. You could make do with a photograph album or a cheap clear folder for that matter. Let me share with you 3 reasons why collecting banknotes can be a desirable hobby.

For starters, there’s actually a term for the study and collection of banknotes. It is called "Notaphily”. A notaphilist therefore collects all types of banknotes, be it paper money, plastic or polymer notes. Just like any enthusiast, a notaphilist would be willing to spend some of his money on his hobby. However, irony kicks in when the note collector spends his or her hard-earned money to buy banknotes only to be kept and not spent. Although it may not make sense to you now, I believe that after you finish reading this article you will be more inclined to start your own collection of banknotes.

In the following paragraphs, I will be sharing 3 reasons why one should consider collecting banknotes as a hobby. So here I go...

The first reason is fairly obvious. Often, when travelling around the world one tends to end up with spare foreign banknotes. Basically, one can then start a banknotes collection by keeping the smaller denominations of the foreign currency notes of the places one has been to. That would serve as a memento and could also be a considered simple souvenir of the places visited. The challenge would then be to get a hold of banknotes from the past which are not printed anymore or no longer in circulation. Acquiring such notes will help expand one’s banknotes collection and make it more unique and interesting.

As far as I am concerned, whenever I get the chance to travel the world, I seek street markets and antique stores in order to purchase old banknotes.Sometimes, I even barter trade and offer my own country’s banknote as a gesture of goodwill when bargaining or negotiating with sellers at street markets. Lately, I have been actively looking for pre-Euro banknotes when backpacking across countries in Europe. Those notes would be one of the main things I look out for when I traverse the various European street markets. It definitely helps that banknotes tend to be lighter than coins and are thus a lesser burden to carry back home.

Banknotes can give insights regarding the people of the country in which the notes are used. All banknotes which are legal tender normally have a numerical value displayed on it. It could be printed on both sides or only on one side but it must be on the note for it to be identified correctly. Besides the numerical value, there are often many different features, motifs and designs printed on the various banknotes that were used ever since paper currency was first developed in China in the 7th century A.D. Judging by what is printed on the banknotes, one can tell a thing or two about the culture of the people who use the notes as well as the prominent people, creatures, activities or simply anything that is significant in those places. Some notes show idyllic scenes of everyday life with images depicting the innocence and youthfulness of children while others include pictures of plants, animals or even mythical creatures. The more common ones nowadays are banknotes that portray renowned politicians or famous personas. Such designs commemorate prominent leaders in a country’s history or special contributors’ to the country’s arts or sciences fields.

Personally, my favourite banknote designs are from countries with controversial histories or those that generally have a bad reputation due to past conflicts, internal or external. This is mainly because the banknotes of such countries actually remind me that the people of those countries are normal people who live ordinary lives on a day to day basis. They use that very same banknote to purchase goods and services daily assuming they can get access to the banknotes and earn enough of them on a regular basis. I do understand that sometimes due to corruption or alternative form of governance the money is only kept and used by those with power and authority over others. This is rather unfortunate and it further emphasizes the importance of fair discussions and effective negotiation on the distributions of power within societies. Hence, banknotes do have educational value as they raise awareness on the countries in which they are used.

The last reason for collecting banknotes is that it can be financially rewarding too. The hobby encourages collectors to have a better appreciation of foreign exchange rates. The knowledge of converting currencies from one currency to another ensures that a notaphilist does not keep large denominations of a foreign currency especially if it is weakening or depreciating. The ability and willingness to keep track of exchange rates will make the notaphilist a good currency trader although there is more to it than just that.

Furthermore, some collectors are able to reap huge profits from selling their rarer specimens to richer and highly selective collectors especially if they are unique and in mint conditions. The uniqueness could be in the form of an error in the printing or the repetition of certain special numbers in the serial numbers of the notes. However, as mentioned above, it is critical that the notes are kept in really good condition and sealed if possible. The best grade for notes would be the uncirculated ones whereas the worst possible condition is called poor and there is a large range in between. With proper hindsight, it is recommended then that a banknote collector store his collection in an appropriate album and put in extra effort to protect his notes if he has intention to sell some pieces or keep the collection for the long term. This is especially important as old,uncommon and well preserved notes tend to fetch a higher price because they are truly seeker after. Therefore, collecting money can actually bring in more money to the collector if he or she has the right notes.

Considering all that has been shared above, it is clear that banknotes collection can be an attractive and appealing hobby. It is not very costly and can even bring in profits. One can learn about different countries and their citizens from the images on the notes and it could be something that one looks for when shopping during one’s travels. Although one can cheat by buying a whole compilation, it is safe to say that such an action defeats the purpose of a hobby as it would be complete even before it started. Before I end, I would just like to remind all you potential notaphilists to be wary when dealing with foreign currencies and do not get conned or cheated with counterfeit money. Take some time to read and research about the different banknotes that are available worldwide and be aware of the security features and check for authenticity whenever possible. Stay safe and have fun collecting money!

Do you want to start a banknote collection? If there's a will there's a way... 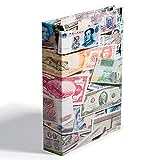 5 out of 5 stars from 1 rating of collecting notes as a hobby.