Yahtzee by Milton Bradley - Christmas Gifts for Board Game Fans

Yahtzee is one of my favorite games; there is just something about shaking those dice and getting exactly what you want. I am sure there is someone on your Christmas list that would love to receive the game this year. It is a game that gives you the best of game play and the luck of the dice. The game was first made available the year I was born, so my love for the game was just fated to be. I made a point of going out in 1996 and buying the 40th anniversary edition of the game.

Yahtzee was first called Yacht, and is said to have been invented by a Canadian couple who played it on their yacht. The rights for the game were bought in 1956 by Edwin S. Lowe and he described it as a poker dice game. The popularity of the game took off after Lowe organized a number of Yahtzee parties to introduce the game. The game is now made by Milton Bradley, a division of Hasbro.

The point of Yahtzee is to get “poker hands” by rolling the dice; for example there are set points for a full house (two of the same number on the dice, and 3 of the same number on the dice) or a straight (which is 5 dice in succeeding numbers, like 1,2,3,4,5). Points are also earned for having five of each number from 1 to 6. In addition, if you get 5 of a kind that is counted as a Yahtzee and gets you extra points.  There is also a chance option (where you add up the total of all your dice). Each combination is only allowed once and you get three chances or rolls to get it.  Scores are tallied up on a scorecard and whoever has the highest point total wins.  The game can be played by from one to any number of people and is recommended for ages 8 and up. 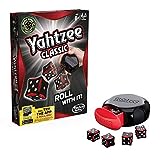 Yahtzee is a fun and easy game to play. It is exciting to try for a five-of-a-kind roll of the dice; strategy also comes into play to help you try to collect the right combinations.

This is the basic set that includes 5 dice, a dice cup, bonus chips, scorecards and a rules booklet. It is recommended for those over 8-years-old. 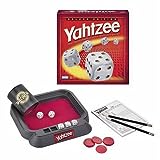 The deluxe edition comes with a leather-look dice cup and a velvet lined tray to throw the dice onto. The dice are dark with glittering white dots and the scorecard is more detailed than the regular one, as is the rules booklet.

This set would be perfect for the Yahtzee addict who is tired of rolling their dice on a table. 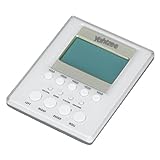 This hand-held electronic version of Yahtzee makes it easy to take the game with you and helps you to sneak a game or two in during the day wherever you are.

This is a good gift for the person who loves electronic gadgets, and of course who loves Yahtzee. 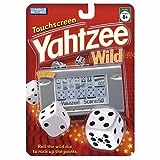 This is another electronic version of the game that features a touch screen. The game features wild dice to help you get the combinations you need quickly and more easily.

This is a travel version of Yahtzee that gives you all you need in a convenient package.

It features a zippered case, five dice, a dice-roling tray with holders for the dice, a felt-lined cup, a pencil, scorecards, and instruction.

I am sure you can find one version of Yahtzee here that will fit the requirements of those special people on your gift-giving list. Enjoy and make sure they invite you to play a game or two.