A Bit of Yo-Yo History

The yo-yo is one of the oldest toys around and it dates back to 500BC. It was found to have existed in Ancient Greece based on archeological evidences found on vase paintings. The first yo-yos were made of terra cotta disks.

Yo-yos made from rocks were used as hunting weapons in the Philippines during the 16th century. The hunters hunt from trees by throwing rock yo-yos at wild animals that walk beneath the trees.

One of the first toys to be brought into space was the yo-yo. One lucky yellow yo-yo went on the space shuttle Discovery in 1985 when the crew members went on their space mission that year. Astronaut David Griggs was the first man to play the yo-yo in outer space and demonstrated the effects of weighlessness on a swinging yo-yo.

In 1928, a Filipino immigrant in the United States, Pedro Flores opened a yo-yo manufacturing factory in California and started making yo-yo toys. The business expanded rapidly and was bought over by entrepreneur Donald Duncan a year later. In 1968, Flambeau Inc. took over the yo-yo business and as of 2011, Flambeau still owns the yo-yo company.

The yo-yo toys were not only sold in the United States but worldwide as well. The toys became a fad in the mid-1980s and later in the 1990s. Yo-yo contests and championships were held in many countries for yo-yo players and enthusiasts to show off their skills and tricks at yo-yo playing.

The Imperial Yo-yo is said to be the original yo-yo shape. Other variations like the Modified and Butterfly were two of the more popular shapes of the yo-yo. There are several other shapes available but they were not so popular among expert yo-yo players.

How to Play the Yo-Yo

Here are some of the basic rules and tricks on how to play with the yo-yo.

Before you start playing with your yo-yo, you must check the area around you and make sure you have plenty of space. Stay clear of windows and other breakable objects. Be careful your yo-yo does not hit anybody's head otherwise you will be in a lot of trouble.

How to Hold the Yo-yo

Put the yo-yo in the centre of your palm. Your palm should be facing up and the string on the yo-yo should be coming from the top of your yo-yo.

Snap your wrist and arm downwards so that the yo-yo falls towards the floor. Keep your arm above your waist.

When the yo-yo reaches the other end of the string, turn your palm so that it faces downwards.The yo-yo should spin at the bottom of the string. This is called The Sleeper.

Give the string a tug and the yo-yo will come back up into your hand.

Practise The Sleeper a few more times before you go on to the other tricks. You can also watch the video below on how to do The Sleeper with the yo-yo.

Hold the yo-yo in your hand with your palm facing down. Flick your wrist and arm downwards and release the yo-yo so that the yo-yo falls vertically towards the floor. The yo-yo should not do The Sleeper with this trick. Just give the string a tug as soon as the yo-yo reaches the bottom and the yo-yo will return to your hand. This technique is called the Gravity Pull.

The Power Throw is an essential trick of yo-yo playing. It requires a more powerful snap of the wrist and arm. When the yo-yo reaches the end of the string, give the string a tug and the yo-yo will come back into your hand.

With your arm by your side, hold the yo-yo with your palm facing behind you. Swing your arm forward and release the yo-yo. The yo-yo will extend away from you horizontally. When it reaches the other end of the string, give the string a tug and the yo-yo will return.

Practise this technique several times and you should be able to master throwing the yo-yo forward but make sure you do not hit anyone with your yo-yo.

Apply The Sleeper technique and gently let your yo-yo touch the floor. The spinning yo-yo will pull it along the floor. Give the string a tug before the yo-yo stops spinning and it will return. Practise this trick on the carpet so that you will not damage your yo-yo.

To execute this trick, you have to use The Sleeper and Forward Pass techniques you have learnt. Release your yo-yo with the Forward Pass technique, let it do The Sleeper at the other end of the string. While your yo-yo is spinning, swing the yo-yo over your shoulder and behind your back until it goes around 360 degrees, then give the string a tug and the yo-yo will come home.

Yo-yo Goes Around the World

Once you have mastered the basic skills and have full control of the movements of your yo-yo, you will be able to play your yo-yo like a real pro. You can also learn more advanced tricks with your yo-yo or perhaps create your own yo-yo tricks. 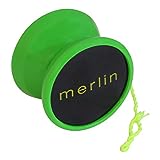