Two-year-olds are brimming with energy. Your two-year-old may be boisterous, full of fun and ready for some action. They have discovered there is a world outside your front door - an exciting world, ready to be explored. And it's certainly true that time spent outdoors is wonderful for expelling all that extra energy!

There are plenty of outdoor toys on the market, ready and waiting to entertain your small child. However, a scooter has to be one of the most traditional and long-lasting toys available. Scooters go back decades and they are still going strong. Why? Because they are fun! Didn't you have one? Chances are you did, and that is why you are on-line today, searching out the possibilities for your own son or daughter. Either that, or your precious little one just won't stop hankering after his or hers older siblings. Sometimes that can be the biggest problem with subsequent children - all they really want is to be like their big brothers or sisters.

What you will discover, though, is that most of the scooters you will find are advertised as suitable from the age of three upwards - don't let that put you off, though, because it doesn't mean you can't buy a scooter for a two year old.  You just have to find the right one.

Well, this is an article based on personal experience. I am a parent of a two-year-old, and for his second birthday we decided it would be a good idea to get him a scooter. Summer was approaching and he'd already received a ton of toys for Christmas just three months before. Besides, he was always trying to clamber on his older brother's.

As I began to research the possibilties of buying him a scooter, I eventually came to the conclusion that there were only two contenders - the Mini Micro (known as the Mini Kick in the US) and the Radio Flyer My First Scooter.

The genius behind both of these scooters, making them the ideal choice for a small child, is that there are two wheels at the front. Traditionally, scooters were made with three wheels - two at the back and one at the front. The Mini Micro and the Radio Flyer My First Scooter are the complete opposite - two wheels at the front and one at the back. It is this aspect of the design that makes both of these scooters a suitable choice for a two year old.

The advantage of the two front wheels is that balance is greatly aided.  And balance is the key issue, for if your child cannot balance alone on his scooter, then it will quickly be relegated to the back of the garage.

Your child might even have been an early walker - before his first birthday, even.  Perhaps he is always running, kicking a ball, climbing everywhere.  However, stable as though he may seem, put him on a traditional single-front-wheel scooter and the chances are he just won't be able to do it.  (Even some children over the age of three can have balance issues with scooters.) 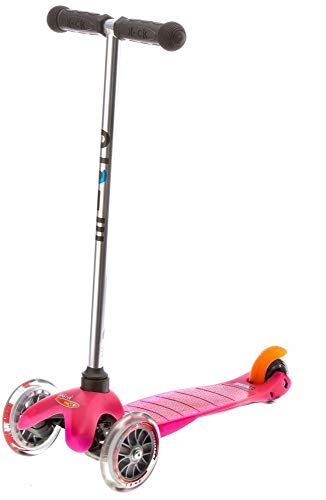 In our house we have the Mini Micro model. We purchased it for our son's second birthday, as he was always trying to get on his brother's 'big' scooter. My initial thoughts were that he would scoot around the house only for a while, whilst he got used to it, taking it outside perhaps later in the year. WRONG. On the very first day he got it, we ended up carrying it to his brother's school at pick-up time, where he raced around the playground like nobody's business. Talk about a duck taking to the water.... I had to chase after him, as I wasn't sure whether he understood the concept of STOP. Good exercise for parents, I must say

Low to the Ground

Mini Micros are low to the ground, which makes them very easy for young children to feel comfortable on. Basically, they do not need to have one foot considerably higher than the other, as with some other scooters. Because they are low to the ground, this also aids balance. Additionally, the foot plate is made of light-weight plastic, which is actually an excellent material as it avoids the danger of your child scraping or banging his ankles on a hard piece of metal - which, believe me, can happen a lot with the metal models.

The Mini Micro Scooter does not steer in the usual way i.e. by turning the handlebars left or right.  Basically, it turns when your child leans to one side, thus putting his bodyweight in the direction that he wants to turn.  Whilst this may seem strange at first (to you, perhaps, more than your child) this is actually a very good method of changing direction for a young child.  With my own son, it was not long at all before he was effortlessly gliding around corners.

Even the most enthusiastic two-year-old may not want to scooter for the entire duration of your journey.  If you are heading to the park, then you may want to use the buggy to get there, and scooter upon arrival.  No problems.  The Mini Micro is very lightweight - I stick mine upside down, over the top of the buggy with no problems at all.  You can take off the handlebar as well, but I usually only do this when I want to put it in the car.

But It Is Marketed As A Product For Three Year Olds.

Indeed it is.  But please, don't let that stop you.  Somewhere, on one of the websites for Micro Scooter suppliers, I found an assurance that, whilst these scooters are advertised as suitable for ages 3-5, many younger children use them no problems whatsoever.  My son has fallen off his scooter just twice (recently, I may add, not even when it was new).  Both times it was because he insisted on trying to turn round and face backwards.  Boys will be boys, after all..... and he didn't hurt himself anyway.  Rest assured, when used in the correct manner, the Mini Micro Scooter is virtually impossible to tip over. 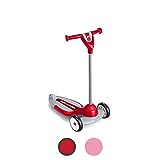 The Radio Flyer My First Scooter

The Radio Flyer is of a very similar design to the Mini Micro. It has the two wheels at the front, and a very wide foot plate which means that it is a very safe scooter for a two year old. It has a slightly chunkier appearance than the Mini Micro Scooter, and though I am not certain, I believe the steering is not 'lean-to-turn' like the Micro.

I am not going to launch into a review about the Radio Flyer- that would be wrong of me, because we did not buy it ourselves and I cannot give a personal overview.  It is slightly cheaper than the Mini Micro, and the reviews I read were generally very positive.  A few reviewers indicated that their children found it difficult to steer, though.  At the end of the day, we fell in love with the stylish Mini Micro, and we are still in love with it now!