Bakugan is a new hot battle game that comes along with plenty of toys that the kids are all going crazy for. The show Bakugan Battle Brawlers airs on Cartoon Network. So I thought I would tell you all about it and give the resources for us parents who have no idea what this is all about. So enjoy some quick lessons to help you have some understanding on this new craze our kids are so obsessed with.

You will also find all the Bakugan Battle games and toys right here.

What is Bakugan? Are you a confused Parent?

How do us parents keep up with all this stuff? The kids ask us for toys for the holidays and birthdays and we have no idea what they are talking about. Bakugan is yet another one of those things. To me it seems so confusing, but the kids know all about it and I think we should have some insight too.

Are you a Bakugan Expert?

Bakugan and the Battle Brawlers - What exactly are they?

Bakugan is a Japanese anime television series that airs on The Cartoon Network and is very similar to Pokemon. Kids seem to really take to the Japanese anime. The story centers on the lives of creatures called Bakugan and the battle brawlers who have the deep power to wield them. To me it seems so hard to understand, but again the kids are really drawn to it and seem to have it all down.

The story of Bakugan Battle Brawlers begins when cards mysteriously fall out of the sky and are picked up by children all over the world. These cards feature different characters, environments, and powers. The kids created their own game with these cards, unaware that the cards correspond with an alternate world called Vestroia. In the alternate world, a rogue Bakugan monster named Naga wanted to seize all the power for himself. When he tried to absorb one of the two cores and seize its power, the negative energy proved to be too much for Naga. The negative energy exploded and the other core fell to earth, which caused the creatures from Vestroia to start emerging in Bakugan battles.

All the Bakugan creatures have an attribute: fire, water, earth, dark, light, and wind. However, in Vestroia, these are known as: Pyrus, Aquas, Subterra, Darkus, Haos, and Ventus. There are also two alternate powers, Silent and Infinity (these are the two cores in Vestroia). Bakugan also have secondary attributes that fuse with the original: Coldus, Shockus, Novus, and Blandus (this is an attribute that includes all attributes).

The protagonist of the series is a twelve-year-old boy named Dan. His life revolves around Bakugan, and he apparently helped to co-create the Bakugan game. Dan's goal is to become the number one ranked Bakugan player in the world. Dan also has several friends that he talks to on his computer through a webcam.

Bakugan Episode 1 : Bakugan: The Battle Begins Part 1 - This will give you the beginning insight

Dan is a 12 year old boy who loves Bakugan. His greatest ambition is to be the number 1 battle brawler in the world. He is a Pyrus battler. He is very quick to temper and he is in love with Runo, but he doesn't want to admit it (neither does Runo). His guardian Bakugan is the Pyrus-attribute Dragonoid (nicknamed Drago).

At the age of 12, Runo is not your typical pre-teen girl. Runo is a tomboy who loves playing Bakugan with people that have skills to show off. Runo is a Haos battler. Her Guardian Bakugan is the Haos-attribute Tigrerra, who is very obedient to her master and powerful in battle. Runo hates when people think that just because she is a girl, they can beat her.

He is a wealthy, 11 year old who is very generous and smart. He is what you could call a walking encyclopedia. He loves to play Bakugan and he also likes to work on strategies. He used to be extremely obedient to his parents just because he wanted to please them, but that changed when he met the Brawlers. He now has no regrets for the past, realizing that he only wanted to make his parents happy. He is an Aquos battler. His Guardian Bakugan are the Aquos-attribute Preyas and the Haos Angelo/Pyrus Diablo Preyas.

She's 12 years old and tries to stay happy even when the worst has happened (for example, when Billy ended up under the control of Masquerade), her acting happy after something terrible happened is generally just to cover up her real feelings. Julie forgets things easily, proving that she is a little scatterbrained at times. She is always up and happy with a positive attitude. She is a Subterra battler. At the beginning of the series, she is shown to have a crush on Dan (which led to some arguments with a jealous Runo), but later, she likes Billy and accepts a date offer from him and they start going out. Julie has a sister named Daisy who has bested her in everything since she was a child. Her Guardian Bakugan is Subterra-attribute Gorem.

He is a very strong, silent, cool type 14-year-old. He is the former 1st ranked Bakugan player who later moves down to sixth position. He is a master of Bakugan, and is also Dan's childhood friend. Shun is a loner, a boy of very few words, yet is willing to help his friends at every turn almost. He is a Ventus battler. He approaches Bakugan like a ninja. He lives with his grandfather (who used to be a famous ninja warrior) who once expected Shun to follow in his footsteps instead of playing Bakugan. His Guardian Bakugan is the Ventus-attribute Skyress whom Shun received from his comatose mother in the hospital.

She is a 14-year-old-girl and, the princess of Bakugan from Moscow who doesn't play Bakugan. Michael Gehabich is her grandfather, but after learning that her grandfather became Hal-G and works with Naga, she constantly worried about him. Alice usually just gives advice to the brawlers, instead of battling. Alice and Marucho are the 2 brawlers who mostly use strategy. Although unlike Marucho, Alice gives her strategies to the brawlers. During season 2 she left the Brawlers after finding out that she was Masquerade out of intense guilt over what she did as him, but later returns in time to save Dan and Drago.

He used to be the number 1 Bakugan player before he left Alice's body. His goal is to send all Bakugan to the Doom Dimension with his Doom Card, so he can evolve his Hydranoid and have the Ultimate Bakugan. He is a Darkus battler. He is revealed to be Alice in episode 38 and 39. Masquerade came to being when negative energy changed Alice. (Who doesn't know she is Masquerade or what happens when she becomes him.) Alice's Grandfather was also affected by the negative energy and he was changed into Hal-G. (A man working with Naga to destroy Earth and Vestroia.) He battles with Dan in episode 38 and loses. He is actually Alice, but Masquerade disappears from her body.

Also known as Webmaster Joe. He lived in a hospital with his mother. The Brawlers used to think he was working for Masquerade, but he actually sent a message to the Brawlers to warn them that Masquerade was plotting against them. When he met Dan, he said he would only tell him if he was working for Masquerade if Dan beat him in a battle. In the middle of the battle he fainted. When he woke up they asked him to be one of the Brawlers. He gladly accepted. Sometime after he moved to the Brawlers neighborhood, he found Wayvern who had the Infinity core inside her. Wayvern's attribute is Infinity which is positive energy. Wayvern is Joe's Guardian Bakugan. At the end of the last episode of Bakugan Joe and Chan Lee are seen on a bench together holding hands.Joe is the first person to beat Masquerade at Bakugan.

You need at least two players to play Bakugan Battle Brawlers. If you do not have any Bakugan, you can buy Bakugan starter packs at a toy store or online. **See resources below to buy Bakugan online. The youngest player goes first during the bakugan game.

Each player begins the game with the same amount of Bakugan and cards. There is a minimum of 3. Each player may only have 1 special ability card.

Each card placed face down must touch the other cards on an entire side. You cannot play an ability card on your first turn.

To battle the Bakugans, look at the cards. Compare the G power of the battling Bakugans. Flip the card over and add or subtract the G power boost. Whichever Bakugan has the most G power wins the battle. The winner of the battle gets to capture the defeated Bakugan and it's card.

To win the game, battle until all cards are captured. Or, in a game with more than 2 players, the game can also end when only 1 person has Bakugan Battle Brawlers left. Then add up the HSP points. Also, each Bakugan is worth 100 HSP points. Add that to your total. The person with the most HSP points is the winner of the game. 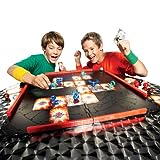 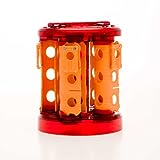 Spinmaster Bakugan Bakurack Collector Case
# Spinning rack will hold up to 5 Bakuclips for storage and quick deployment when a challenge is made# Includes BakuRack, end caps and paper sleeve
Buy Now 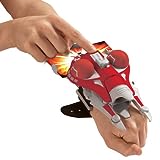 Bakugan Launcher
# The bakugan Launcher lets you accurately launch your monsters to your cards.# Features spring action, no batteries required.# Use the launcher with your own Bakugan collection.
Buy Now