Who Is The Best Diablo 3 Class?

There is no true best class for Diablo 3, but that doesn't mean you can't find the best Diablo 3 class to suit your play style.

Maybe you want to play the best PvE class or maybe PvP is more scene. You might want to use spells to slaughter the minions of hell or summon your own minions to do your bidding or maybe you prefer a durable melee fighter?

Regardless of your preferences and play style there is a best Diablo 3 class to suit your needs. Discover them on this page and vote for your favourite in our poll below. Graphics and information on this page is sourced from the Diablo 3 Game Guide.

Who Do You Think The Best Class Is?

Diablo 3 Gear Review - (All Available On This Page)

Barbarian - Is The Barbarian The Best Diablo 3 Class?

The Barbarian is a savage melee fighter that is capable of taking a fair amount of punishment on the battlefield. The Barbarian is capable of dishing out lots of damage both to single targets and to multiple enemies. You can do this either by dual wielding or using a massive two handed weapon to crush your enemies.

The Barbarian uses the Fury resource system which increases when you deal damage and receive it. This Fury can be spent on your active skills which are split into Fury Generators, Fury Spenders and Situational abilities. You are able to use unique weapons including Mighty Belts, Mighty One-Handed Weapons & Mighty Two-Handed Weapons. Other key features of the Barbarian include melee mastery, brutal attacks, shouts and taking hits.

Read more about the Barbarian 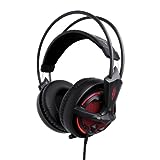 Fans of the Diablo series will be able to hear all of the sounds of Sanctuary in crisp clear sound with the SteelSeries Diablo 3 Gaming Headset.

This headset is top of the range (like all SteelSeries gear) and offers closed leather ear headphones, a retractable microphone and illumination options.

The Demon Hunter is a ranged class that prefers to stick to the shadows, using various traps and battle tactics to take down the demons from hell. The Demon Hunter is capable of slowing and disabling enemies and also has the ability to dual wield small hand crossbows as opposed to massive two-handed versions.

The Demon Hunter uses a dual resource system (hatred/discipline). Discipline is a slow regenerating resource that the Demon Hunter uses for defensive abilities, such as laying traps, dodging attacks and tumbling around the battlefield. Hatred is a much faster regenerating resource and is used for offensive abilities to increase damage output against hell's minions. The Demon Hunter's skills are split up into Discipline, Hatred Generator and Hatred Spender. You are capable of equipping unique weapons such as Cloaks, Hand Crossbows and Quivers. Other key features of the Demon Hunter include ranged weaponry, traps, shadow magic and battle tactics.

Read more about the Demon Hunter

Monk - Is The Monk The Best Diablo 3 Class?

The monk is a melee fighter focusing on speed and agility on the battlefield, quickly striking his enemies and dashing between them. The Monk can also buff his allies using his mantras. Monks are heavily reliant on using combinations of their skills for maximum effectiveness.

The Monk uses the spirit resource which is slow regenerating but can be generated quickly through the use of basic attacks and completing various Monk skill combos. The Monk's skills are split into Spirit Generators (simple attacks), Spirit Spenders (more powerful attacks) and Mantras (active/passive effects to buff the Monk and his party). Monks can equip many special deadly weapons including Daibos, Fist Weapons and Spirit Stones (helm). Other key features of the Monk include spiritual power, combos, mantras, speed and mobility.

Read more about the Monk

The Witch Doctor is similar to the Necromancer from Diablo 2. He relies on a potent mix of summoning minions and using various offensive spells to take out the demons of hell. The Witch Doctor is also capable of hexes, poisons and cursing his enemies.

The Witch Doctor uses the mana resource which is a massively deep resource but is slow regenerating, this requires the Witch Doctor to think carefully about his mana expenditure. The skills of the Witch Doctor are split between Physical Realm (offensive damaging skills), Spirit Realm (Hexes and curses to weaken your enemies) and Command (summoning related). The Witch Doctor is the only class capable of equipping items such as Mojos, Ceremonial Knives and Voodoo Masks. Other key features of the Witch Doctor include pets, destructive magic, battlefield control, curses and hexes.

Read more about the Witch Doctor

Wizard - Is The Wizard The Best Diablo 3 Class?

The Wizard is similar to the Sorceress from Diablo 2, relying on the power of the elements and long-range abilities to force the demons of hell back to the depths.

The Wizard uses the fast regenerating Arcane Power resource, which allows you to constantly use your basic and less potent spells. But still allows you to unleash massive amounts of energy when required. The skills of the Wizard are split into Signature (simple spells that are cheap/free to cast), Offensive and Utility (Teleport, Slow Time & Armor buffs). The Wizard uses various unique equipment including wands, orbs and wizard hats.

Read more about the Wizard

What Do You Think Of Diablo 3? - Who Is The Best Diablo 3 Class To You?