This list of the best gaming mice for fingertip grip users should come in handy if you're looking for a replacement or an upgrade. Small, low-profile mice are considered to be the best for this style of gameplay. Shape and ergonomics aside, an accurate optical or laser sensor is also a must. With a proper gaming mouse and mat combo, fingertip grip users can achieve ultimate precision and control.

Find out what is the best fingertip mouse in the list below. Feel free to share your experience with different computer mice in the comments and vote for your favorite gaming gear brand as well.

What Is Fingertip Grip Style?

Are you a claw grip, palm grip or fingertip grip user?

Finger-tip grip is one of the ways of holding computer mice. Gamers using this method rest the base of their palm on the mouse mat, while moving and lifting the mouse with their fingers alone (thus the name). These users usually prefer small, light and ambidextrous mice for easy glide and good accuracy. However, some people like bigger ones for increased stability. For example, I've occasionally used something resembling fingertip grip with my Logitech MX518 (now replaced with a G400), which is normally considered to be a "palm grip" mouse due to its size.

If you move your mouse with your fingers only, and your palm isn't touching the mouse, then you're using fingertip grip. I'm obviously biased seeing how I use it myself, but I think it's the best grip style since it gives you the most precise control. Get a proper mouse, and you'll really kick butt in FPS, RTS, and other competitive games!

If you are a fan of SteelSeries gaming gear but the Sensei or Kana are too large for your hands, consider the Kinzu v2. It is a cheaper optical gaming mouse that is in no way inferior to the flagship Sensei, except its capable of less DPI (up to 3,600). This shouldn't matter to you unless you are using an unusually high resolution with a multiple monitor setup, though.

The v2 has a superior sensor that no longer suffers from acceleration bugs, and the Pro Edition adds sensitive high-quality Omron button switches which are preferred by professional gamers. Even though Kinzu v2 is a lower-end offering from SteelSeries, it has everything a gamer really needs: solid shape, reliable switches, and an accurate sensor.

Abyssus is a simple, light ambidextrous mice that was built specifically for fingertip grip users. It boasts a 3,500 DPI optical sensor and a 1,000 MHz USB polling rate. You should note that it doesn't have thumb buttons, which is a big drawback for me. But if you're looking for a small, precice gaming mouse and don't need the side buttons, then Abyssus might be the best fingertip grip mouse for you. The now-discontinued Razer Salmosa is the predecessor of this mouse, and might serve you well if you can purchase it from a third-party seller.

Maurus is marketed as a "professional gaming mouse" for FPS games

Genius might not have the following that Razer and SteelSeries do, but that doesn't mean they can't create good products. The Maurus mouse from their GX Gaming line-up boasts some impressive technical specs (optical sensor capable of up to 3,500 DPI, Omron switches, macro support, braided cable) and has a nice symmetrical shape. Size-wise it's fairly small (which makes it suitable for claw and fingertip grips), but it is a bit heavier than normal because of the built-in 20 g weight. A very good offering considering the low price, and the fact that you'll be getting the solid A3090 sensor and Omron switches in a small shell.

Smallest and lightest optical gaming mouse currently made by Logitech

When looking for a claw / finger grip mouse, one usually goes straight for the smallest and lightest ones. Logitech's G100s is no exception. As a successor to the popular G1 and G100 models, G100s features a small and light body (which is nevertheless durable as expected of Logitech's manufacturing), an optical 2,500 DPI sensor, comfortable coating, and no silly gimmicks like glowy LEDs. This is a great thing because it allows the maker to reduce the price; as a result, G100s is one of the cheapest high-quality gaming mice around. 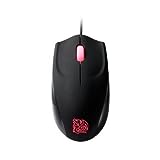 A smaller and lighter version of Tt eSPORTS Azurues

Azurues Mini is a small FPS gaming mouse from Tt eSPORTS by Thermaltake. It features three standard buttons, 1.8m braided cable, rubber coating, an optical 1600 DPI sensor (Avago ADNS-3080), and is sized just 115 x 63 x 38mm, which makes Azurues Mini a great fingertip grip mouse. Rare for such a small product, it actually has removable weights so you can fine-tune the weight of the mouse to your liking. A travel pouch is included for carrying your mouse easily.

Roccat Pyra is another viable choice for a fingertip grip mouse. It is very small and light, and is marketed for mobile gaming (both wired and wireless versions are available), but fingertip grip users who are looking for a small, precise mouse might want to use it with their desktop PCs as well. Just keep in mind that it's off-center sensor might feel weird to some people. However, the sensor hardware itself is a good optical LED device from PixArt that tracks very well - I have a Pyra myself and it doesn't malfunction even during the fastest swipes.

The mouse has a single additional button on both sides, which is by default bound to Roccat's trademark EasyShit function, but can easily be modified via drivers. Pyra uses 1,000 Hz USB update rate which can't be changed.

Despite liking the shape and the feel of this mouse a lot, I have to acknowledge its flaws, as well. The build quality isn't the greatest, and I experienced some issues after using it for over a year: glue started leaking from the side rubber grips, and the middle mouse button became unreliable, only working once every few clicks. I hope Roccat will decide to release a refresh of this product (Pyra+) where these issues are solved.

G9x actually comes with 2 interchangeable grips called "Wide Load" and "Precision". Fingertip grip users will most likely be interested in the "Precision" case which gives exceptional control. If you don't mind the price and the slight positive acceleration associated with the Avago ADNS-9500 laser sensor, this is one of the best fingertip grip mice you can get.

This tiny optical mouse is well-known by pro gamers in the US and elsewhere. It features 400 / 800 / 1600 DPI steps, passable Huano switches, and a shape optimized for gamers with small hands and fingertip grip users. It has no bells and whistles like macros or LEDs, and simply does its job for an affordable price of $35. It is a mouse for choice for many Starcraft 2 players, but people who like other genre games like MMOs might find the lack of side buttons a big drawback.

Razer Orochi is marketed as a mobile gaming mouse for notebooks. It features a wireless Bluetooth 3.0 connection, but it can also be connected via a wire if you prefer, thus avoiding running out of battery power. The mouse uses a quality 4G laser sensor, same as found in several other Razer mice, which is capable of a solid 6,400 DPI which should be more than enough for anyone, especially lower-resolution laptop screenns.

Razer Orochi is powered by two AA batteries in the wireless mode, which should be enough for 30 hours non-stop usage according to the manufacturer. This is a great choice for those who like small and light mice, or game on their laptops.

This well-known gaming mouse from Cooler Master offers a solid 3,500 DPI optical sensor (800 / 1800 / 3500 presets), 1,000 MHz USB polling rate, ultra-swift PTFE feet for best glide, 32 Kb on-board memory, and rubberized grips. The mouse is built from ground up and marketed for claw grip users, but many owners reported being able to use it with finger-tip grip comfortably.

CM Spawn does have an ergonomic shape and a most unusual ring finger rest, so if you prefer smaller, symmetrical mice, this might not be the one for you. It is also a bit wider than many other products mentioned on this list.

What is your favorite gaming mice brand?

Mouse surface is also important for your gaming performance

A good mouse pad can improve your gaming performance and help you get more headshots. Keep in mind that some mice need quality pads just to track movement correctly. Optical gaming mice are usually less prone to tracking problems than laser ones, and work just fine even on cheap mats.

One of the things you need to decide when choosing a mouse mat is whether you want speed or control. Speed mouse mats have a smooth surface that your mouse will glide across very easily. Control mouse pads have a rougher surface that helps you achieve higher precision. The former are usually hard plastic mats, and the latter are often flexible cloth ones.

Some good control mouse pads are: